Brennan pitches for a TV show

In 1960, when big-screen Westerns were in decline and TV seemed to be taking over, it was not surprising that Walter Brennan and his son Andy, with their company Brennan Productions, put together a pilot which they hoped would be taken up by a network. The pilot was eventually screened in 1962 but the series never happened. It isn’t very surprising. When you watch it you wonder what any network would have seen in it. None of the characters was sympathetic. Walter Brennan himself did his usual cackling-old-hen act but the show had nothing else to recommend it and the other acting was particularly wishy-washy, and sometimes downright wooden.


It lasts 64 minutes (presumably to fill an hour and a half of the schedules), in black & white of course, and it was noticeably cheaply staged, mostly done on studio sets with the occasional perfunctory exterior location shot. 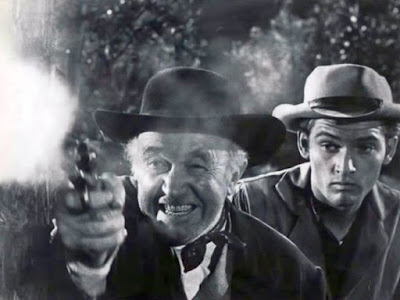 Brennan cackles his way through as a fraudulent preacher with a gun
The plot is a Montana one, with Brennan as a soi-disant clergyman Preacher Hawker who never went to the trouble of being ordained, and who, during his frequent voiceover narration, spouts biblical platitudes throughout the show, to the point where it becomes certainly tiresome and almost offensive. He is a cattleman who claims to ‘own’ the whole Big Sag valley but Texan Sam Barbee (Leif Erikson) and his son Lee (Chris Robinson) lay claim to half of it, and a range war looks imminent.

Mother and daughter
Other characters are Hawker’s angry and rather superior daughter Hannah (Luana Patten); Hannah’s mother, the sour and malicious Sarah (Virginia Gregg); and three loutish and cowardly sons (Bill Coontz, Robert Beecher and someone uncredited). Then in town we have the crooked owner of the Last Chance saloon Chan Bartholomew (Les Tremayne) and his estranged and drunken wife Goldie (a rather Shelley Wintersish Constance Ford) and the gunman Fargo who loves Goldie (Don Kelly). So you see none of these cast members was exactly stellar and their characters are all unlikeable. Why would anyone want to make a series of this?


There is one good thing though: Goldie threatens Chan with a derringer. Not only that, she even does him in with it in the last part of the movie. Of course both user and target were typical derringer material. 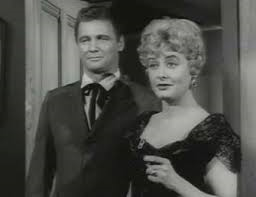 Fargo watches as Goldie threatens saloon owner Chan wih her purse gun
The eponymous gun battle is rather fudged. The first part is OK, though done at night in the studio and pretty phony, but when the gunmen led by Fargo go to Hawker’s cabin and kill his sons it is only recounted by Hannah, and not shown.


Nor is it satisfactorily explained why Fargo should be so evil all of a sudden. 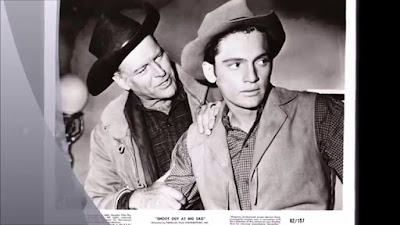 Texas cattleman and his son
Bizarrely, at the graveside of his sons, Preacher Hawker immediately afterwards conducts a wedding ceremony between Lee and Hannah. Hawker decides to leave but is equally unaccountably reconciled to his odious wife. The End. It all really is pretty bad.


Skip it, e-pards. You will have missed nothing.