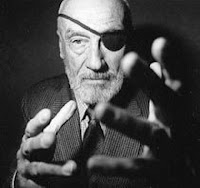 André De Toth (left) directed six Westerns starring Randolph Scott. This one and The Bounty Hunter later the same year were the last. Many thought of De Toth as an arty European director but he sure loved the hard-boiled American movie, noirs and horror, but Westerns in particular. He started with the superb Ramrod in 1947 and co-wrote the equally fine The Gunfighter in 1950; it was a stellar start in the genre. For me, De Toth’s best Western was Day of the Outlaw with Robert Ryan and Burl Ives in 1959 but the ones he did with Scott are more than competent. Man in the Saddle, Carson City, Thunder Over the Plains and The Stranger Wore a Gun preceded these two 1954 pictures. They are all watchable-to-good.

Riding Shotgun, which, despite weaknesses here and there, is in the ‘good’ category, has quite a bit in common with the later Decision at Sundown, a Budd Boetticher picture. Apart from some first-reel location action, it’s set in town, with Randy holed up from 16 minutes in and for much of the rest of the picture in a ratty saloon (a barn in Sundown). Boetticher was not at his best in psychological-claustrophobic town Westerns but De Toth handled them extremely well. Many Westerns feature cretinous mobs and/or pusillanimous townspeople who jump to conclusions and assume without evidence that a man is guilty, and they feel entirely justified in killing the fellow – often with a lynch rope but a bullet will do. Riding Shotgun takes this a stage further: it is in fact the whole plot. In this one the women are just as bad, being titillated by the excitement. The town should have known better. The man they are accusing is Randolph Scott. I mean, doh. 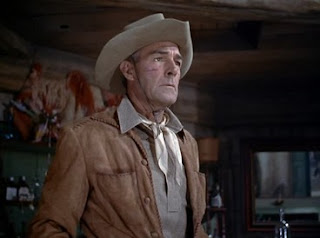 Randy is Larry Delong and he has been ridin’ shotgun on stages for years, all over the West, searching for the man who, it transpires later in the movie, killed his sister and nephew in a stagecoach hold-up back in Wyoming. “For three years”, he tells us, “I dedicated every waking moment of my life to scouring the frontier for a killer for a very personal reason. I'd worked at all kinds of jobs from Wyoming to Oregon. In the last year, I'd working every stage line between Canada and Mexico, riding shotgun. I knew that sooner or later my path would again cross that of the man I wanted - Dan Marady”. This Marady is a ruthless outlaw played by the always reliable James Millican. From The Man from Colorado in 1948 to Red Sundown in 1956 Millican was never less than solid in Westerns. 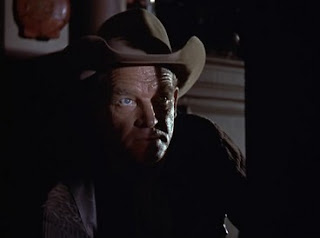 One of the main reasons that I like this particular De Toth/Scott effort is that a derringer not only appears but in fact is pretty central to the plot. You know how obsessed I am with derringers. You see, Millican (right) has one and the pocket gun is a ‘good luck piece’. The handle inscription tells us that he won it for marksmanship in St Louis in 1870, though anyone who can hit a barn wall with a derringer at more than a few paces must be accounted a very good marksman indeed. Perhaps Kirk Douglas had seen this picture before doing The Last Sunset. Anyway, this sneaky popgun, which takes .41 rimfire cartridges, we are told (fascinating detail for Westernistas), IDs Marady to Larry, as was intended. Later, Larry uses it (rather improbably) to escape captivity, and later still it will play a key part in the last-reel dénouement. Randy was no stranger to the derringer, as viewers of A Lawless Street will know. But rarely has the little stinger pistol played such a key role in a Western. No wonder I like this movie.


I also like the cast. Millican’s chief – if rather inept – henchman Pinto is Charles Bronson, still billed as Buchinsky in those days. He finally falls prey to another sneaky weapon, a slingshot wielded by a town boy. Bronson was never an Oscar contender but in this one he is effective as 2nd heavy. 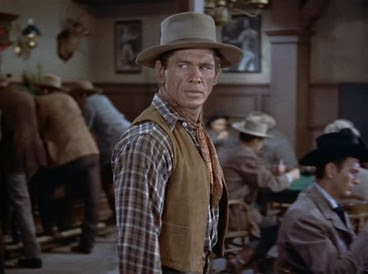 Mr. Buchinsky
Joe Sawyer and Richard Garrick are the leading town conclusion-jumpers who do not care to bother with the formality of an actual trial. I always like Joe. He’d been in Westerns since 1934. He’d be Sergeant Biff O’Hara, a stalwart of Rin Tin Tin, shortly after but he appeared in other big- and small-screen oaters too. Garrick had started on Broadway in 1907 but you can spot him out West in the likes of Law and Order, Many Rivers to Cross and Powder River. 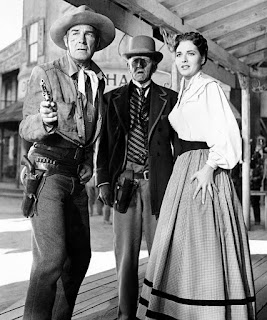 Randy with (rather perfunctory) amour Joan Weldon. That's Garrick in the middle.
Wayne Morris is the slightly Alan Hale Jr.-ish amiable lawman, a friend of Larry’s but struggling to do his duty. He is a fine trencherman, preferring to eat pie in the lunchroom to actually shooting anyone. The part would have suited Andy Devine, though Morris goes for the less comic approach. Former child star Morris was one of the last of the B-Western heroes before the 60-minute second feature programmer bit the dust. He was Bob Younger in Bad Men of Missouri in 1941 and promoted to Cole Younger in The Younger Brothers in ’49. He was in sixteen big-screen Westerns between 1937 and ’61 so he knew a thing or two about wearing a gun (and a badge). 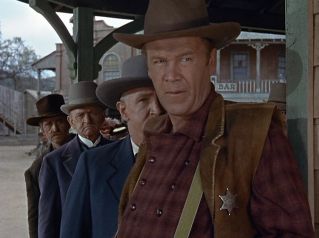 Wayne Morris as amiable lawman
Dub Taylor pops up briefly, as does good old Frank Ferguson and Jack Perrin too, as townsmen. It’s rather a good line-up. There’s an excellent would-be lyncher (Vic Perrin, billed as ‘Bar-M Rider with Lynching Rope’), a real creep, whom De Toth has ordered to be entirely silent. He just steals a lariat and fashions a noose from it and fingers the rope lovingly throughout the events.

Joan Weldon is the love interest but she has very little to do and in the movie she and Larry are little more than platonic pals.


Anyway, enough of the cast.


It’s shot in nice bright color by the great Bert Glennon, mostly on the Warners Western town set but with some nice rocky Californian locations too. There are some original and interesting angles and points of view, with De Toth and Glennon clearly playing around. The mirror in the saloon is used to good effect, in a Euro-expresssionist way. 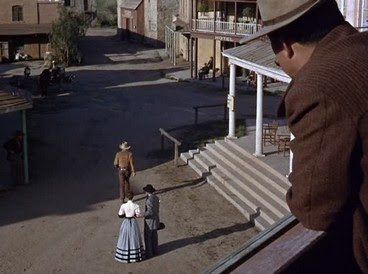 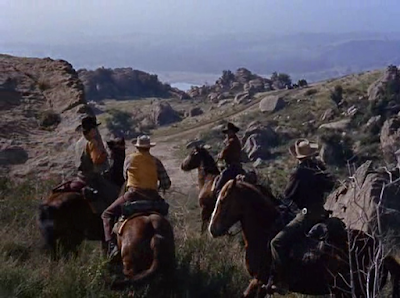 Nice cinematography
The music is a chirpy David Buttolph theme which stays with you an hour or two after the picture has ended.


Randy narrates. These voiceovers can be at best redundant and at worst annoying but this one works somehow.


After all the hatred and tension, the happy-ever-after ending is too pat and sudden, but that was a common fault in B-Westerns.

De Toth took nine takes on one scene. Jack Warner was livid and urged more speed. De Toth replied by racing through all the rest of the movie with only one take per scene, so perhaps that's why it seems a bit rushed at the end.

There are faint echoes of High Noon two years before as Randy stands alone against the whole town, but they were very faint Warner-Brothers echoes only.


It’s a satisfying if straightforwardly linear town Western that is worth a DVD purchase, I’d say. Even if you’re not derringer-obsessed. 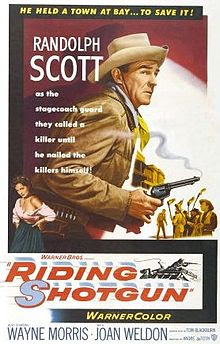