Billy the Kid rides (yet) again 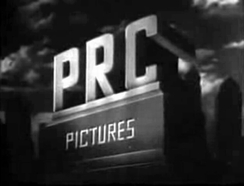 PRC, Producers Releasing Corporation, usually known as Poverty Row Corp, invested quite heavily in Billy the Kid movies from 1940 to ’43. Inasmuch as they ever invested heavily in anything, that is. There were in fact nineteen one-hour Billy programmers between those dates. Try, for example, Billy the Kid’s Smoking Guns or Billy the Kid Trapped. You will be thrilled. Bob Steele started as Billy before, in October ’41, giving way to Buster Crabbe. Buster was Billy the Kid the most, thirteen times, but Bob didn’t do badly: he was Billy six times. Al St. John was Billy's comic old-timer sidekick, Fuzzy (sidekicks were compulsory in them days) and he didn’t seem to notice that the Kid's face had changed somewhere in the summer of ’41. He just went right on sidekickin’. Bob, Buster, what's the difference? 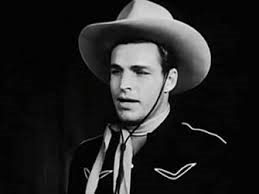 Buster as Billy
In these Bob ‘n’ Buster flicks Billy was a goody, ridin’ the range and Doing Good – helping out sturdy farmers and damsels in distress and so forth, and rescuing them from the nefarious schemes of crooked saloon owners and suchlike. Hell, in one of them, Sheriff of Sage Valley, he was even a lawman. These Billies were nominally outlaws, and sort of hiding from the law, but they never actually did anything bad.


Buster was 32 when he started as Billy and Bob 33, so both were a little geriatric to play the homicidal teenager, but I don’t think anyone minded, or even noticed. 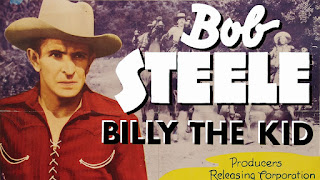 Bob as Billy
Billy the Kid’s Gun Justice was a typical Bob example. Having saved Ann, a fair homesteader’s daughter (Louise Currie) from some bullies who are henchmen of crooked saloon owner Cobb Allen (Al Ferguson), Billy finds out that Allen is operating a lowdown scheme, killing decent farmers, grabbing their land and then selling it to other farmers – but he has diverted all the water, and wants another thousand dollars to let it flow to the farms. Of course Allen has a suit and a thin mustache – they were obligatory for crooked saloon owners – and would normally also be expected to whip out a sneaky derringer at a key moment, but this time he just has a banal Colt .45, which is a disappointment. 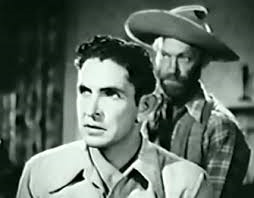 Bob 'n' Al
The sets are cheap and the characters spend a lot of the time explaining the plot to each other. Location scenes in which Bob or the baddies gallop from one cabin to another are short and perfunctory.


As for some odd reason Western heroes in those days were expected to have two sidekicks, a crusty old-timer one and a smoothie type the gals might fall for, in addition to Fuzzy we also have Carleton Young as Jeff (excellent name for a Westerner). A Republic and Poverty Row regular, Carleton was often to be seen as sidekick or heavy in cheap Westerns. Later, in fact, he did much better, being noticed by John Ford and getting quite big parts in Ford and John Wayne Westerns. He starred in the episode of Wagon Train that Ford directed, The Colter Craven Story, and was in fact rather good. 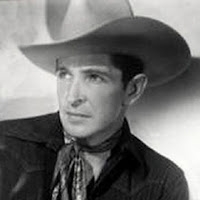 I always liked Bob Steele (left). He was producer/director/writer RN Bradbury’s son, and started in movies aged 14 with his twin brother Bill in Bradbury’s The Adventures of Bob and Bill. Bob started leading in Westerns right back in the silent days and IMDb credits him with an astonishing 311 Western appearances between 1921 and an uncredited bit-part in a 1971 James Garner picture. He became a talkie B-Western star in the 30s but by the 1940s his star was rather on the wane, as so often happened. In fact Rex Lease, another former star, also descended to Poverty Row and appears, briefly, as “Henchman Buck” in Billy the Kid’s Gun Justice. Oh howe are the myghtie ouerthrowen (Samuel I, 19), as you have no doubt oft reflected.


Well, there are fisticuffs, ambushes, a treasure map and double-crossing, in the best tradition, and naturally the pards win out and they best the bad guys who are carted off to jail. The boys ride off for another adventure in about a month’s time. Doubtless the young boys in the audience were enthralled and maybe even the girls weren’t too bored.