There have been quite a few Last Outlaws. John Ford, no less, directed a 1919 silent of that title, Gary Cooper was in a 1927 Paramount picture of the same name, Harry Carey Sr starred in a 1936 Christy Cabanne-directed RKO talkie. John Ford planned a post-war remake of this Harry Carey one, and signed up Carey and John Wayne for the project, but went for My Darling Clementine instead. And in the 1980 there was a TV mini-series. In 2014 there would be a Johnny Ringo/Bat Masterson The Last Outlaw. So one way and another, the Last Outlaws were never really the last. None of the above, however, had the same plot. They weren’t remakes. The 90s HBO offering was a Quantrillesque tale of ex-Confederates who can’t accept that the war is ended (“The war ain’t never gonna be over,” says one) and become outlaws, hitting “Yankee” banks. It’s New Mexico, 1873.


In fact they start with a bank raid. I liked this bit because the bank manager has a hidden derringer, and you know how I like derringer Westerns. The ruthless gang leader Graff discovers it and asks scornfully, “What the hell is this?” But this derringer is destined to play a key part in the last reel (if TV movies have reels). So that sent the picture up in my estimation. 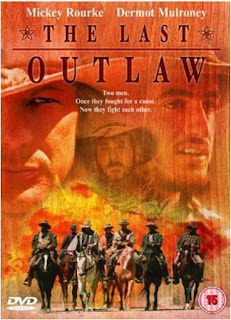 The gang was somehow expected in the town and a large posse is ready to gun them all down in a Northfield/Wild Bunch way but Graff gets them out by blowing up the bank with dynamite (only patented in 1867 so he got hold of it pretty fast). 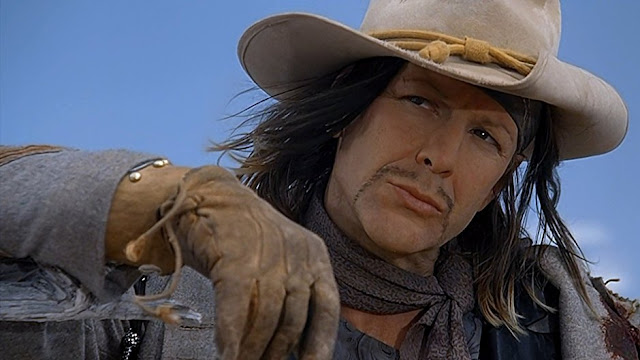 Bad guy
Mickey Rourke is Graff. Mr. Rourke plays the bandit as more than half crazed and cold as ice. He wears a bandanna on his head and this adds to his piratical appearance. The ‘good’ member of the gang, who comes to reject Graff’s brutality (better late than never) is Eustis (Dermot Mulroney, who had small parts in Bad Girls, Young Guns and Sunset). In fact eventually Eustis shoots Graff when the leader is about to murder wounded gang member Loomis (Daniel Quinn), who is slowing them down. The gang (which includes Steve Buscemi) leave Graff for dead and ride off, with Eustis as their new leader, heading by a roundabout route for Mexico. 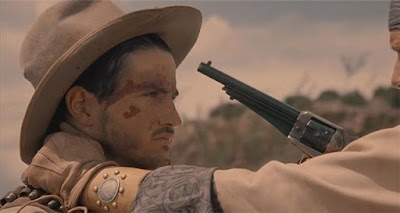 Bad guy Rourke threatens (relatively) good guy Mulroney
The posse chasing them (which includes Rourke’s brother Joey) is led by the equally ruthless Marshal Sharp (Gavan O’Herlihy) who is blond (blond men are rarely goodies in Westerns) and a crack long-distance shot with his rifle. He and his men, including Banker McLintock (Richard Fancy) with an umbrella, are ready to do anything to track down the Rebs and get their money back. And it turns out that Graff isn’t dead after all, and he joins up with the posse to get his revenge on Eustis… 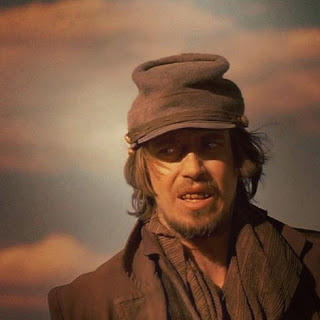 Steve is a Reb
Both gang and posse are riven by internecine strife, and both are gradually reduced in numbers. The banker and his money take a one-way trip off a cliff thanks to Graff. Finally the gang is down to three, leader Eustis, a Deets-like Lovecraft (Keith David) and an Edmond O’Brien/RG Armstrong-ish Potts (Ted Levine). Lovecraft has some mumbo-jumbo with bones which he throws to foretell the future, and this future doesn’t look too bright. Finally the gang remnants get to the Rio Grande, within sight of safety but…

Lovecraft and Potts
Well, I can’t tell you any more without a spoiler alert, and you wouldn’t want that. But I bet you can guess there will be a Eustis/Graff one-on-one showdown, and you may not be wrong.


It’s 90s HBO so there are a few f-words and such and the violence is quite violent. But it’s not Deadwood. It's a '15' now. The New Mexico locations are attractive, shot by Jack Conroy, who worked on an episode of The Magnificent Seven TV series, in nice color. 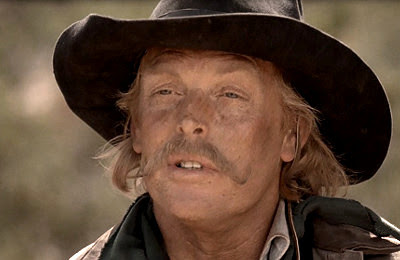 The marshal is just as ruthless
The director was Geoff Murphy, who directed the same episode of The Magnificent Seven and also did Young Guns. He keeps the pace up. It was writer Eric Red’s only Western. There was one good line, when Potts looks across the Rio Grande and says, “That ain’t Mexico. Where’s the women?”


All in all this The Last Outlaw is watchable.