Purgatory is an enjoyable made-for-TV Western which benefits enormously from the presence of Sam Shepard as lead. Shepard was always good in Westerns, though he has done tragically few (of course they just don’t make so many these days). One thinks in particular of him as Pea-Eye in Streets of Laredo (1995), as Butch Cassidy in Blackthorn (2011) and in particular The Assassination of Jesse James by the Coward Robert Ford (2007), in which he was a superb, sour Frank. 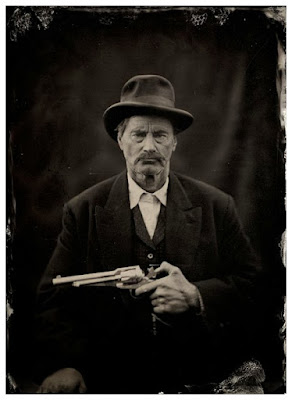 Sam as Frank James
In Purgatory he plays Wild Bill Hickok. The quite amusing conceit of the picture is that the town of Refuge is indeed a Purgatory. I am not sufficiently versed in ecclesiastical doctrine to know if this Purgatory is how the church sees it. This one seems to be a half-way house in which the residents, all dead, serve time. If they do not kill or steal or even cuss, they will go upstairs after the allotted time (ten years seems to be all). If they backslide, and fall into their old ways, a mysterious Indian (Saginaw Grant), some kind of gatekeeper/shaman, hurls them into a fiery abyss. 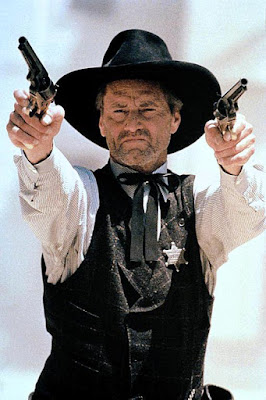 Sam as Wild Bill
Wild Bill is the sheriff but he wears no guns and has no jail. His deputy is Billy the Kid (Donnie Wahlberg, founding member of a boy band, apparently, and a brother of Mark). Billy risks the occasional damn but Wild Bill warns him about that. The storekeeper is Jesse James (JD Souther, another singer/songwriter) and the doc is Doc Holliday (Randy Quaid), who seems to have moved from dentistry to general practice. Mr. Quaid knew a thing or two about Doc H, I suppose, because his brother Dennis had been Doc to Kevin Costner’s Wyatt Earp in 1994. 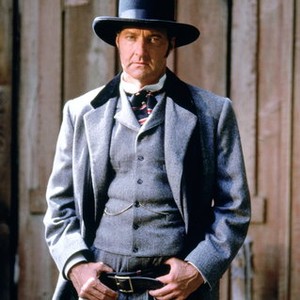 Brother Quaid is Doc
There’s also a certain ‘Lefty’ Slade (John Dennis Johnston) and I hoped this was Joseph A 'Jack' Slade but nay, this Lefty was shot dead in Tombstone so it can’t be Jack.


There has to be a dame, natch, and I was hoping it might have been the late Belle Starr or Pearl Hart or Rose Dunn but no such luck; it’s a certain Betty McCullogh (Amelia Heinle), the first woman to be hanged in Arizona Territory.


All these outlaws are waiting and being good, hoping to be summoned to eternal bliss.


However, some real bad hombres, led by Blackjack Britton (Eric Roberts) murderously hold up a bank in Sweetwater (so many Westerns loved that town name) and there is a gun battle like the Northfield or Wild Bunch one. A famed harlot is among the slain. Most of the badmen evade the pretty tough posse and in the middle of the desert they come suddenly upon a peaceful and verdant valley, where lies the town of Refuge, which welcomes them generously. 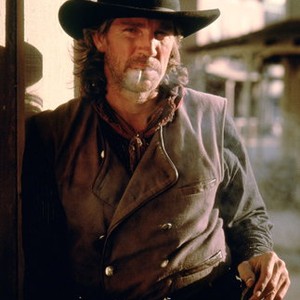 The bad guy. He even smokes.
The only condition is, they mustn’t curse.


There’s a very ominous church bell and the population all has to be inside before the last bong. There’s quite a lot of this hocus-pocus, which I’m not too keen on, not being a fan of mumbo-jumbo, but there we are.


There’s a youth in the outlaw gang, Sonny (Brad Rowe, don’t know anything about him) and he is rather startled when he spots the arrival by stage of the famed harlot (Shannon Kenny) he had seen killed in Sweetwater. He twigs. In fact because he is so enamored of Rose, he is quite keen to die himself so that he may stay with her.


Now, all this is supposed to have happened exactly ten years after the death of JB Hickock. The only trouble is, that would have been August 1886, whereas Doc Holliday didn’t die of TB until November 1887. So when is this? Still, I don’t want to be picky.


Lefty Slade uses his spade to kill an outlaw who is trampling his cabbages (fair enough) but the grim reaper, aka the shaman, comes along and casts him into the pit or eternal damnation as a result, so he probably regretted it.


Sonny comes upon Rose swimming in a pool – standard for Westerns; amazing how many pools there were – but it’s a family TV Western so she is bathing in her long underclothes. Nothing too daring, don’t worry. It’s lerve, though.


Well, it all comes to a climax and the showdown looms. First Wild Bill, then Billy, then Jesse and finally Doc are all willing to sacrifice their eternal happiness for one last shoot-out. The four, with Sonny, stand in line, facing down Black Jack and his villains. Doc even has a derringer tucked in his vest pocket, so that sent the movie up in my estimation (even if he never appeared to use it). 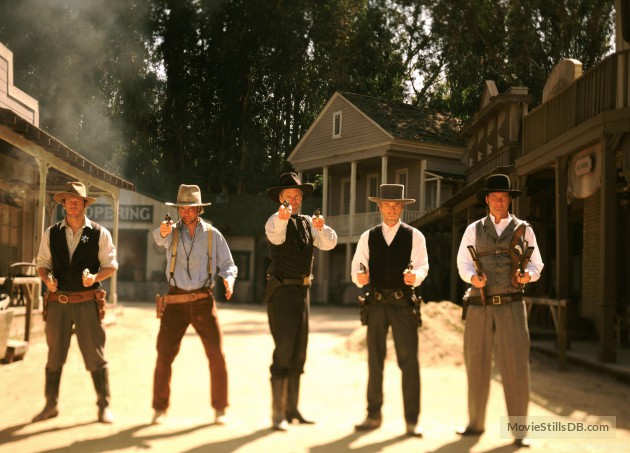 They are ready to sacrifice their souls for a final showdown
The ending is something of a cop-out as the grim reaper is cheated of his prey. There is no boat to ferry the dead across the Styx, but, obviously, a stagecoach. It's a Stageway to Heaven. And who is the Charon up on the box? Why, it’s good old RG Armstrong! How I loved RG in Westerns, From Hell to Texas (Hell, again) in 1958 through to this, his last Western outing 41 years later. He turns up at a gallop and deprives the disgruntled shaman of his victims, saying that the Creator may be tough but he ain’t a fool, and he carts them off to paradise in his six-up. 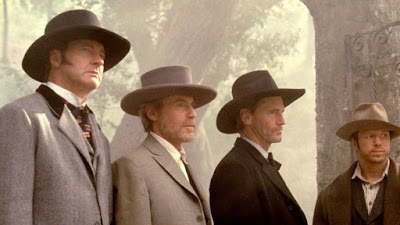 Doc, Jesse, Wild Bill and Billy
This is a curiously American morality play. Because these killers have spent time not cursing and attending church, they are saved, even though they have blasted people to bits with their firearms. Well, there you go.


It’s all quite entertaining, though.


I do think writer Gordon T Dawson, who had worked on Cat Ballou and Major Dundee but mostly did TV shows, and director Uli Edel (only this and another TV Western in 2002) tipped their hand a bit early. It might have been better to conceal the true IDs of the principals a little longer. Still, it’s reasonably well handled, Shepard is great and all in all, you could watch it, dear e-pards. 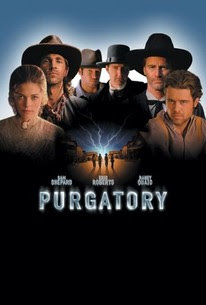