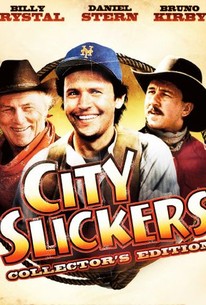 After some 1960s-ish cartoon titles and a (rather overdone) comedy version of the bull-running in Pamplona (an event in which I always cheer for the bulls which catch the stupid men) we are presented with an urban comedy in which New Yorkers say witty things. Have we strayed into a Woody Allen picture?


City Slickers is only a Western by a great stretch of the meaning of the word. Yet it does have Western themes and we’ll give it a go.


Three guys (Billy Crystal, Daniel Stern, Bruno Kirby) have a midlife crisis and decide to take a two-week vacation driving cattle from New Mexico to Colorado. So we have the age-old plot of the Easterner tenderfoot out West, which has been going ever since silent movies began. The midlife crisis is, I must say, brilliantly defined by the movie’s producer and star, Mr. Crystal, in a scene in which he tells schoolchildren (who appear to have Mrs. Thatcher as their class teacher) how their lives will pan out. It is bleak and funny in equal measure. 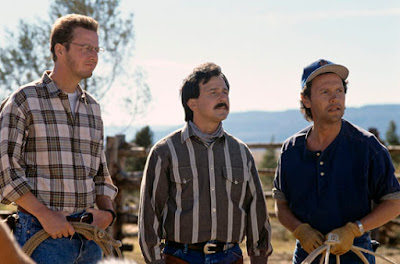 The city-slicker trio arrives
As the trio arrive out West, the color gets brighter and we see lovely New Mexico locations shot by Dean Semler (Dances with Wolves, Lonesome Dove, Appaloosa, Young Guns) and the music surges into stirring, sub-Bernstein Magnificent Seven-style orchestral richness (it’s actually by Marc Shaiman and Thomas Richard Sharp). And after a build-up, there, in an entrance to die for, is Jack Palance as the trail boss Curly, feared by all ("Did you see how leathery he was? He was like a saddle bag with eyes.") Palance strikes a match by scraping it down his cheek. Phew, we think, it’s a Western after all. 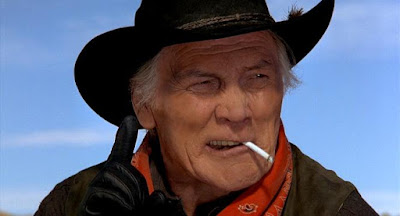 Palance allowed to overact but gets away with it
Crystal, his writers Lowell Ganz and Babaloo Mandel and/or the director Ron Underwood (no Western form) had clearly seen and were probably admirers of Red River. There are various references, one even explicit (“the Yahoo moment”). Of course, they have about ten cows so this picture doesn’t have quite the epic sweep of Howard Hawks’s, even if Palance does go for a Wayne-Dunson vibe. There’s also a Deliverance parody aspect.


There is (there had to be) a stampede, or, as one of the city slickers shouts, “The cows are going away!” It is set off by Crystal using his battery-operated grinder on his tropical roast coffee beans. Unfortunately catching the runaways is hard because Crystal has what he calls a roping disability – despite much practice he has never mastered the lariat. But gradually, as we guessed might happen, the Easterner learns, and after delivering a calf he earns the highest possible accolade: Curly says, “Good job, cowboy.” 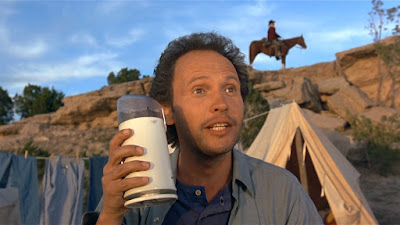 "The cows are going away!"
There has to be a river crossing too, naturally, and Crystal finally and heroically manages his rope. Left without a boss (for such a dominant part, Palance’s appearance is very short lived) the greenhorns man up, rather like the boys left without John Wayne in The Cowboys, and bring the herd in, as Curly would have wanted. In a symbolic moment Crystal abandons his baseball cap for a Stetson.


There are some very funny lines and the whole show is certainly entertaining. It works. You get the impression that city slickers the cast and crew may have been but they evidently loved the Western, as, indeed, who among us does not? For did we not, we would be cast into outer darkness. And wouldn’t be reading this blog.