After many small parts on Gene Autry and Roy Rogers oaters, and some of those Three Mesquiteers ones in the late 1930s, George Montgomery finally got to lead in a Western in the 1941 version of Riders of the Purple Sage. In the early 50s he starred in many a B-Western, many of them already reviewed on this blog, and if he wasn’t the most charismatic of Western actors he was still solid and reliable. Battle of Rogue River, a cavalry Western made the same year as The Lone Gun and Masterson of Kansas, was a typical example.


It was a Sam Katzman/William Castle effort. IMDB tells us that producer Katzman's output “encompassed virtually every genre imaginable. In the 1930s he turned out Tim McCoy westerns for Puritan and Victory, the next decade he was grinding out the East Side Kids series at Monogram, the 1950s saw him making sci-fi opuses and teenage musicals for Columbia and in the 1960s he was cranking out hippie/biker films for AIP and Elvis Presley musicals for MGM.” He was a master of cashing in on a fad and his pictures may not have been fine art but they rarely lost money. 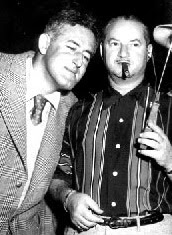 Castle & Katzman evidently pals
William Castle produced and directed low-budget B-movies, which also specialized in faddy gimmicks in both production and promotion, such as the Tingler, a vibrating device attached to theater seats. He didn’t direct that many Westerns, though three of them were with George Montgomery. They were competently done.


Rogue River didn’t exactly have a star-studded cast. After Montgomery it starred Richard Denning as the leader of a civilian militia, John Crawford as an Army lieutenant and Michael Granger as Chief Mike of the Rogue River Indians, with Martha Hyer (later to become Mrs. Hal B Wallis) as the dame for George to fall for. Denning was in a few Westerns, leading in only one, before he became the governor on Hawaii Five-0. He said, "I'm very grateful for a career that wasn't spectacular. I have wonderful memories of it, but I don't really miss it." He was especially unspectacular in Rogue River. Crawford is mostly known for TV work but he also took a few secondary roles in Columbia Western features. As for Granger, he was another with an unspectacular career. He was only in six feature Westerns and led in none of them. He was often an Indian (Sitting Bull in Fort Vengeance), though heaven knows why because he didn’t resemble one in the least. 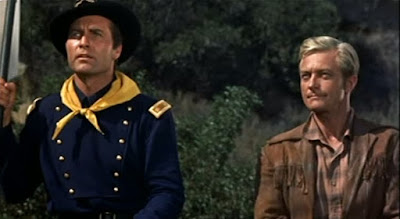 Solid Montgomery (in 1870s cavalry uniform) and unspectacular Denning (who can't be a goody because he's blond)
Battle of Rogue River is a story set during the Rogue River Indian war of 1856 in Oregon. Montgomery is Major Frank Archer, a new martinet fort commander, taking over from a lackadaisical one (good old Willis Bouchey) and Archer is determined to lick the soldiers into shape and wipe out these pesky Indians, using his new-fangled artillery - until orders come from on high telling him to make peace. So he establishes a mutually respectful rapport with Chief Mike. 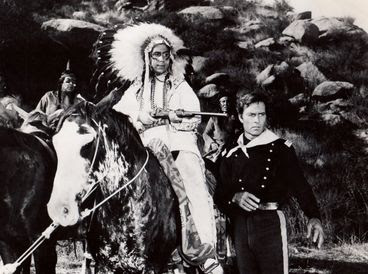 Chief Mike
However, there are bad-guy white men who are against statehood and have a vested interest in keeping the Indian wars going, and it soon becomes apparent that they have suborned apparent good-guy Stacey Wyatt (Denning). He lies and schemes to sabotage Major Archer’s truce.


There’s a sub-Broken Arrow vibe to the picture as the Indians are basically goodies and their chief, despite his silly name and war bonnet, statesmanlike in a Cochisey sort of way.


There’s some nice (though unOregonish) scenery shot in Technicolor by DP Henry Freulich and some stirring Mischa Bakaleinikoff music for us to enjoy. In fact the whole picture would be watchable on a wet afternoon. 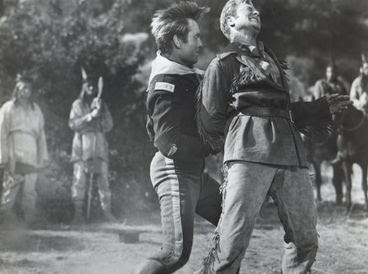 Showdown
After mucho skullduggery and an Archer/Wyatt showdown, the chief and the major kiss and make up, the peace pipe is smoked, Oregon becomes a state and Major Archer wins the hand of the girl who has been, it must be said, rather annoying and silly. 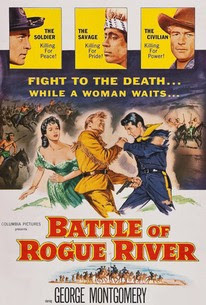