The Westerns of John Sturges


A mixed bag but mostly good 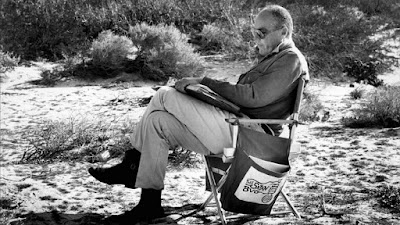 John Sturges (left) made thirteen Westerns (depending on your definition of Western), between 1949 and 1973. Three of these were excellent, seven were good or goodish, and three lousy.


But if you like his pictures or don’t, there is no denying that he was an important figure in the history of the Western movie. Not, certainly, in the John Ford or Howard Hawks class, probably not even in the Anthony Mann or Delmer Daves class. But solid, and just occasionally better than that. Three of his Westerns were superb examples of the genre. He was awarded the Golden Boot award in 1992 for his lifetime contribution to Westerns.


He had a flair for action (not only in the Western genre) but could also handle interesting interplay between characters, especially male ones, and characters who develop. 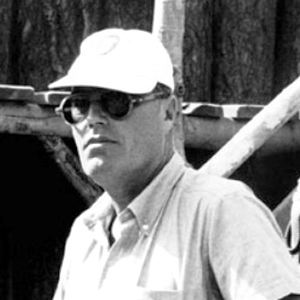 John Sturges (1910 - 1992)
John Elliott Sturges (no relation to Preston) was born in Illinois in 1910. He began his Hollywood career as an editor in 1932. During the Second World War he directed documentaries and training films for the Air Force. His career as director started in 1946 with the first in a series of crime-drama B-movies for Columbia.


In 1949 he directed a contemporary noir, The Walking Hills, which opens with John Ireland as a private eye in a modern city street but soon develops into a true Western. It was produced by Harry Joe Brown and the movie’s star, Randolph Scott, and it was written by Alan Le May of The Searchers fame. There is no doubt that Warners' The Treasure of the Sierra Madre the year before influenced Sturges. Columbia got gold fever too and put out the excellent Lust for Gold and The Walking Hills with similar gold-hunting/skullduggery/tension plots. It’s an excellent picture – and Scott is superb.

Good contemporary Western noir
In 1953, now at MGM, Sturges made what is an underrated Western but in my view a very fine one. ’53 was a great year for the genre and Escape from Fort Bravo was overshadowed by the likes of Shane, The Naked Spur and Hondo. But it’s a tough, gritty, exciting picture with a superb William Holden, beautifully filmed by the great Robert Surtees in New Mexico and Death Valley locations. Sturges was beginning to show a real understanding of the genre.


And then, in 1955, came Bad Day at Black Rock, perhaps Sturges’s master work and a truly fine film. There are those who say it isn’t a Western, and I understand that (like The Walking Hills, it has a contemporary setting) but for me it is one because it addresses truly Western themes, and does so in an original, powerful and intense way. It’s a social-problem film, a noir, an existentialist play – but mostly it’s a Western.

It's a human chess game
The following year Sturges directed a rather sub-prime Western, produced by Aaron Rosenberg and released by Universal, Backlash. It starred Richard Widmark in his first Western as lead. It enjoyed a good performance from John McIntire (always excellent) and there’s some nice Irving Glassberg cinematography of Old Tucson locations but Donna Reed was unsuited and the Borden Chase screenplay had stiff dialogue and unsubtle characters. There’s a fairly basic revenge/hidden gold plot: Widmark is seeking the traitor who was responsible for the death of his father, who buried some gold. There is some action as the ’good guys’ fight off Apaches. All in all it wasn’t bad but it was a Western that didn’t spark. 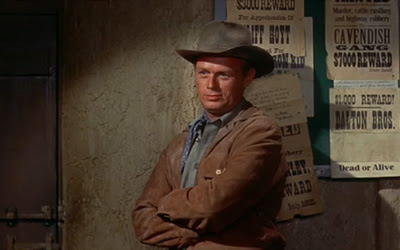 Widmark in Backlash
However, in 1957 came one of my favorite Westerns, the classic late-50s Gunfight at the OK Corral. This was an unapologetic retelling of the Wyatt Earp town-taming-marshal myth, with Burt Lancaster, aided by Kirk Douglas as Doc Holliday, shooting down the Clantons and cleaning up Tombstone. It was pretty much historical hokum, just as all Wyatt Earp movies are, but that’s fine. We don’t watch Western movies for a history lesson, we watch them for excitement, action and drama. And Sturges gave us that in spades with an action Western without pretension and without self-doubt. The late 50s was really the last hurrah of this kind of ‘straight’ Western, before the 60s ushered in the more modern form, giving us ‘the end of the West’ themes, Westerns which dealt with gunfighters feeling out of time, out of date in an increasingly modern and civilized world – and these ideas mirrored the decline in the Western movie itself.

Truly classic 50s Western
But not yet. Sturges still had something to say in the traditional 50s Western mode. Two MGM pictures with Robert Taylor came out in 1958, Saddle the Wind, released in March, and The Law and Jake Wade (yet to be reviewed) which came out in June. Taylor was a good Western lead and suited the saddle and six-gun. The first was directed by Robert Parrish but Sturges directed some of the scenes, uncredited. The second, again with Widmark, was Sturges’s own. Jake Wade was a straight-down-the-line oater, a B-Western if you will, though with big star Taylor and MGM that would hardly be fair. I like both these pictures and in a way they are typical Sturges. Nothing fancy, just actionful Westerns with interesting relationships between the characters.

Jake Wade, with Widmark again
And the 50s ended back with Kirk Douglas when Sturges directed a picture produced by Douglas’s own company and Hal Wallis, and re-using some of the locations, cast and crew of Gunfight at the OK Corral, Paramount’s Last Train from Gun Hill. This had something in common with the Delmer Daves-directed 3:10 to Yuma of two years before as far as plot was concerned but it has a different tone. In color and rather more shoot-‘em-up than Daves went for, it is perhaps a more trad Western, but it still has tension and character-clash. It’s a good picture. 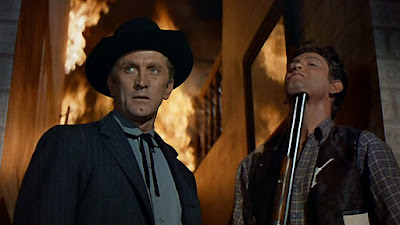 
I have adored The Magnificent Seven (1960) ever since I first saw it, aged 12, when I thought it the best motion picture made in all of human history and I was probably right. It’s a thrilling gun-fest. Like all the best Westerns, it has few arty pretensions (despite the Kurosawa DNA). It just concentrates on action. Actually, when Akiro Kurosawa told Sturges that he loved The Magnificent Seven, Sturges said that was the proudest moment of his life. I’ve seen The Seven Samurai and I find it overlong and turgid. Sturges’s picture was way better.

The Magnificent Seven, the best bit
So what happened? How come a director of a Western as fine as this could follow it with two absolutely dire clunkers? It is difficult to be even polite about Sergeants 3 (1962) (which I haven't reviewed because I refuse to buy it and it hasn't come on TV and isn't on YouTube) and The Hallelujah Trail (1965). They are excruciatingly bad. I can only think he was too busy with The Great Escape. Sergeants 3 wasn’t entirely Sturges’s fault because it was a rat-pack Western and Sinatra was famously sloppy, wouldn’t do retakes and just couldn’t care less. The WR Burnett script was dire (and an insult to Rudyard Kipling). The whole thing is trash. Brian Garfield in his fine guide Western Films called it “asinine and nauseating”. As for Hallelujah Trail, there are no words to describe its elephantine dreadfulness. And it was by the director of The Magnificent Seven! Amazing.

Elephantine dreadfulness
The two movies would be enough to make any director swear off Westerns for evermore but fortunately Sturges came back to the genre in 1967 and with a tidy little oater too, another go at the Earp myth, Hour of the Gun. It had a very solid Wyatt/Doc pairing in James Garner and Jason Robards, and it was (as most Sturges Westerns were) nicely shot, this time in Panavision by the talented Lucien Ballard. It featured the great Robert Ryan as Ike Clanton. It is interesting too in that it starts with the OK Corral fight rather than ending with it. Sturges himself liked the picture, and indeed it has many good points.

Its principal weakness is that it falls heavily into the trap of claiming to be historically factual. It needlessly shows a block-capital introduction reading THIS PICTURE IS BASED ON FACT. THIS IS THE WAY IT HAPPENED. The movie may have been slightly more accurate than previous versions in a few respects but as it has some preposterous hokum about Wyatt and Doc going down to Nogales and having a showdown with Clanton, leaving him dead in the dust, it shouldn’t really have claimed so much. Nobody blames Western movies for a lack of veracity. Except when they claim veracity. Still, it was quite a good little picture, even if it has never had the acclaim meted out to Gunfight at the OK Corral.

Good Wyatt-Doc casting
Five years passed. But in 1972, when he was into his sixties, Sturges collaborated with Clint Eastwood on Joe Kidd. I rather admire this picture. For one thing it was based on a story by the master, Elmore Leonard. For another, it’s visually stunning, with Bruce Surtees (son of the Fort Bravo Surtees) shooting truly beautiful Lone Pine and Old Tucson locations. Eastwood was now emerging from his spaghetti-grunting phase and he was well supported by the excellent Robert Duvall as the bad guy. Though an early-70s Western, there are few signs of revisionism or cynicism. It’s pretty ‘straight’. Not everyone likes it, but I do.

Clint was Joe Kidd
It was nearly the end of John Sturges’s Western career. It probably would have been better if had been. But his last official credit as director of a Western was on the 1973 spaghetti Chino, filmed in Spain and starring Charles Bronson. When Sturges fell ill, producer De Laurentis called in Italian director Duilio Coletti to stand in and in most versions Sturges and Coletti were both credited. It’s rather doubtful how much we can consider this a Sturges Western at all but it was nominally (he is also billed as producer) so we have to count it (unlike Saddle the Wind, which we don’t count). Chino is very bad, whoever was to blame. 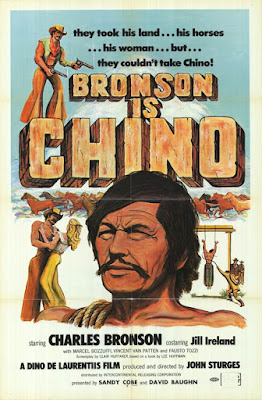 Sturges credited on poster
So there we are, the Western career of John Sturges. With a few (glaring) exceptions, his Westerns were at least watchable and sometimes very good indeed.


He is probably not now residing at the very peak of the Western Mount Parnassus (probably somewhere in the Rockies) but he’s definitely ridin’ around the lower slopes.


And if you’re wondering which Westerns were which, back there in the first paragraph, this is my categorization: 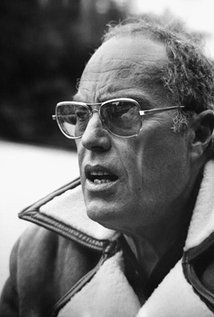