Fred MacMurray was quite good in Westerns (though he didn't care for them much) but this one was mediocre at best. 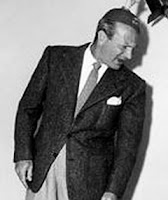 It was directed by Mr. Average, Roy Rowland (left), an MGM script clerk who married the boss’s daughter and suddenly was a director. Rowland did B-movies and, later, Italian Westerns. The pacing of The Moonlighter is iffy and had the picture had, say, Raoul Walsh at the helm it might have been good.


Probably not, though, because it suffered from a great handicap in the shape of Barbara Stanwyck. What people saw in her, I don’t know. She had many fans, and her husbands presumably were attracted to her, but not me. An ugly woman who preferred roles as bossy harridans, she was hardly my idea of a glamorous star. And she would do Westerns, dammit. Starting as a very improbable Annie Oakley in 1935, she was an unsuitable love interest for Joel McCrea in Union Pacific in 1939 and went on from there. She was just about credible (though unsympathetic) as a domineering cattle baroness (The Violent Men, Cattle Queen of Montana) and of course continued bossing around in The Big Valley on TV but in any other Western part except her excellent role in Trooper Hook she was just hopeless. She was risible as bandit chief in the trashy Forty Guns. In this one she is completely ridiculous as a woman deputy in 1950s pants, hair and cosmetics hunting down rustler Fred MacMurray. Dreadful. 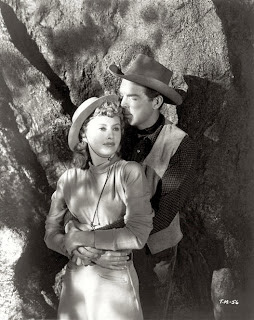 Not good
Fred and she teamed up quite often, notably in Double Indemnity in 1944. This was their only Western together, though. Phew.


It was 1953 so it was shot in trendy 3D, as can be seen immediately from the laughable opening titles. It was a ‘small’ Western largely set in town and very unsuitable to 3D, especially in black & white. As with all these pictures, this one was seen in 2D by 99% of the movie-going public, and still is, of course. 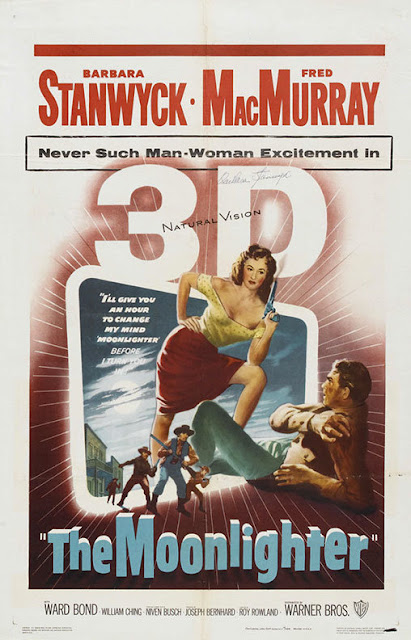 Hilariously bad poster
The first part isn’t bad, with rustler Fred in a cell awaiting trial but expecting to be lynched. It’s quite dark and it’s a stinging indictment of the lynch culture. Of course the mob gets the wrong man and strings up a harmless hobo. Jack Elam is a leading lyncher and prepares the noose with glee. Always good to see Jack. But Fred comes back to get his revenge, and Jack is the first to go, hoist by his own rope – One-Reel Jack strikes again. 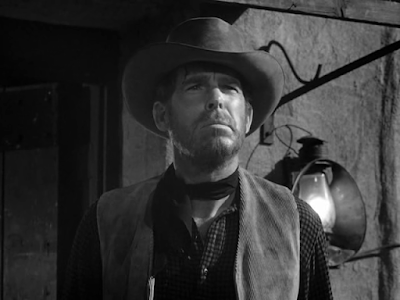 Fred good in Westerns but deserved better than this
But this first reel is OK because Stanwyck hasn’t appeared yet. Plus, we get Sheriff John Dierkes and good old Burt Mustin as the turnkey (in quite a big part, but strangely uncredited). Once la Stanwyck arrives – she seems to be some kind of detective – it all goes downhill because the story becomes a rather weak love triangle. It turns out that before going off rustlin’, Fred used to love her but now she is going with Fred’s younger and rather weaker brother, bank teller Tom (William Ching). While getting his revenge on the lynchers (he was lynching them, essentially) Fred got wounded, and he returns home to his saintly ma (Myra Marsh) for medical attention. And of course that’s where Barbara lives, and the old passion rekindles, and that brings conflict between the brothers. Yawn. 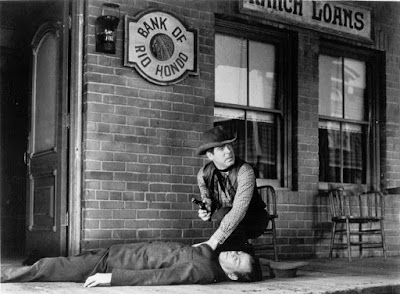 Some of the action is OK, such as when brother Tom is killed with the bank president's derringer
Amazingly, this trite stuff was written by Niven Busch. Now Mr. Busch had penned such classy Westerns as The Westerner, Pursued, and The Man from the Alamo. I don’t know how he churned out this one. Not his usual style at all. 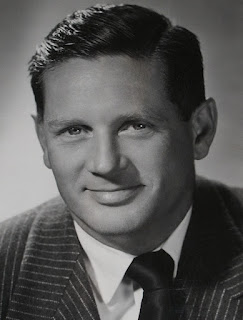 Niven. Really?
Now Ward Bond turns up. Tom thinks he’s law or a Pinkerton looking for Fred but in fact he’s an old partner-in-crime of Fred, and together they plan a bank heist at Tom’s bank, with Tom, who has just been fired, coming in on it. This turns Barbara against Fred and she gets sworn in as a deputy in order to hunt him down. Probable, huh. 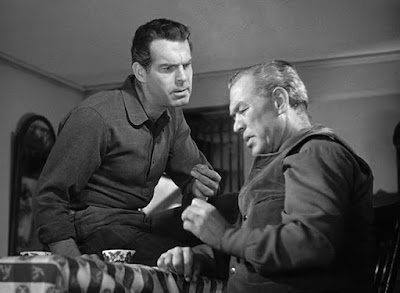 Fred and Ward plan the bank job
The good bit is that they do rob the bank and then getaway in an early automobile (the bank president’s car, in fact). Cars in Westerns are usually a symbol of the new age and a sign that the Old West is dying (think Ride the High Country, The Wild Bunch, The Ballad of Cable Hogue, The Shootist). Sometimes they are shown to be new-fangled, unreliable and no good against the good old horse (The Last Hard Men, the second Monte Walsh, In Old Oklahoma). In this picture, though, it’s just a good getaway vehicle, even if once clear of town they abandon it and take to their horses. 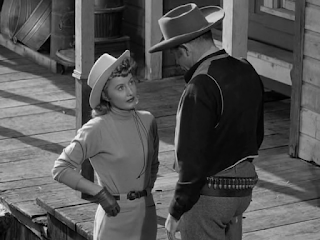 She is sworn in as a deputy. Dig the authentic Western clothes.
There’s another good bit with a waterfall. Bert Glennon was at the camera. And yet another good bit with the dog Hank. But a few good bits do not a great Western make. It has a rather contrived happy ending. All in all, dear e-pards, I fear it isn’t a top Western. And certainly not up to the standard of some other Fred oaters, like At Gunpoint or Day of the Badman. Nor was it a patch on other Westerns of that great year 1953 such as Shane, Hondo or The Naked Spur. 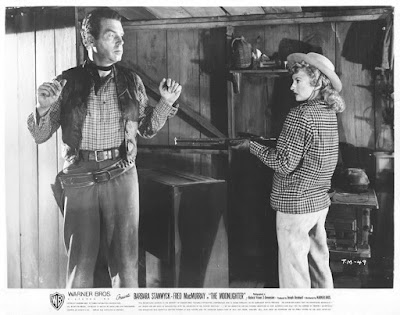 The deputy makes her arrest
You could watch it, I guess, but don’t expect too much.