This is a Western classic. It’s a must-see for any self-respecting amateur of the genre.

Gordon Douglas (left) was famous for turning out bread-and-butter oaters when required but every now and then he did something a bit more special. In the second category I would put The Nevadan, Only the Valiant, Rio Conchos, Fort Dobbs and this one. OK, yes, there was also The Great Missouri Raid, The Big Land and the 1966 remake of Stagecoach. There were some plodders. But overall he was an interesting director.


Fox gave it budget and did it in CinemaScope. But the name of the picture, the black & white, the lurid titles and publicity and the X-certificate combined to present it as a schlock-horror B-movie. It was, of course, nothing of the kind. Viewers expecting a vampire or werewolf prowling the West (and there might be more of those viewers these days) or maybe even an alien from outer space were to be sorely disappointed. It’s a straight crime/thriller, a remake of Fox’s 1949 Henry Hathaway-directed Kiss of Death. 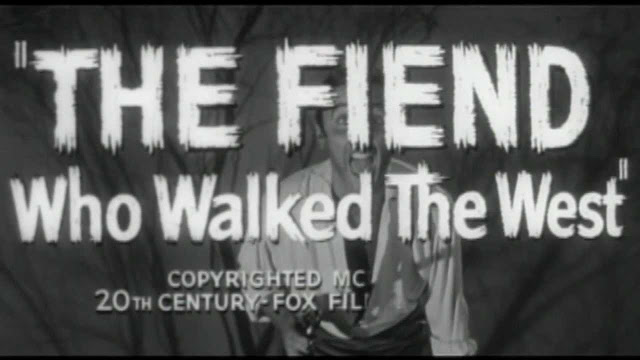 Love the face under the title
There was quite a trend of remaking noirs as Westerns. One thinks of Raoul Walsh remaking his High Sierra as Colorado Territory in 1949, House of Strangers becoming Broken Lance in 1954, or Delmer Daves transposing John Huston’s The Asphalt Jungle to the West in The Badlanders, released the month after Fiend in '58.


But this one is brilliantly done. Douglas went for low-key cheap interior sets to enhance the horror vibe. He played it straight – there isn’t a hint of self-parody or send up. And while he had a solid, even stolid lead in Hugh O’Brian (a big-name draw in ’58 because of Wyatt Earp on TV) he had a stunningly good villain in Robert Evans. In fact Evans stole the whole picture. He is best known to us now as a big-shot producer (Rosemary’s Baby, The Godfather, The Cotton Club, etc.) but he started as an actor. He said he gave up the acting game. "I was sure of one thing: I was a half-assed actor." What? He must be crazy. He was a stunningly good actor. He reminds me a bit of Grant Williams’s smiling blond sadist in Red Sundown two years before. Come to think about it, Jack Arnold would also have directed The Fiend very well.

O'Brian solid but Evans seriously creepy
It starts with fabulous titles and then a good night-time bank raid, with one of the robbers, Dan Hardy (O’Brian) being locked suffocatingly in the vault and thus later captured. We then get scenes in the pen as Hardy begins a ten-year stretch handed down to him by Judge Isaac Parker (Edward Andrews) at Fort Smith (Parker was a favorite judge in Westerns). His cellmate is Felix Griffin (Evans) to whom Hardy recounts the details of his crime. Griffin soon shows himself to be a psychopath: after getting into a fight with another prisoner (Mickey Finn) he feeds the man ground glass to kill him. 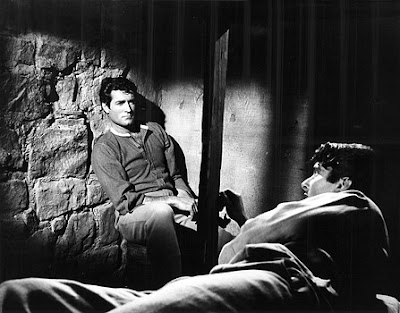 The cellmates bond. But Hugh will soon regret that...
(Great lighting, by the way)
Soon released, Griffin heads for Hardy’s town, murders the elderly infirm mother (Georgia Simmons) of one of Hardy’s accomplices with a bow and arrow (the Western equivalent of Richard Widmark in Kiss of Death pushing the little old lady in a wheelchair down the stairs) and then takes the bank-raid booty and shoots the accomplice (Ken Scott) in the back with a shotgun. Then he burns down the house with the bodies in it. Furthermore, he visits Hardy’s wife and with sheer fear provokes a miscarriage of the baby she is carrying. We have now seen more than enough to know this one is a real wrong ‘un. 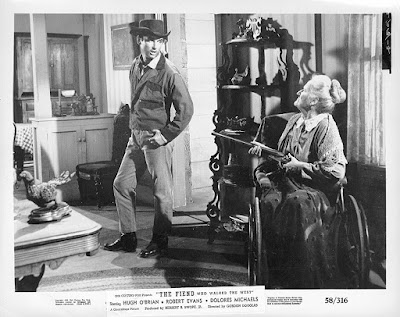 Little old lady may have a shotgun but it won't save her
Well, the authorities decide to release Hardy to track the maniac down, and they arrange an escape by providing Hardy with a derringer with which he can get the drop on Warder Meyer. Excellent. I love derringer Westerns.


The plot pans out fast thenceforth and we come to the showdown in a saloon. All good stuff. 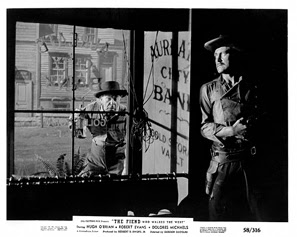 The bank raid is well handled
The writers were top hands. Novelist, poet and screenwriter Harry Brown had done the dark Gregory Peck picture Only the Valiant for Douglas. Philip Yordan had worked on Johnny Guitar, Broken Lance and The Man from Laramie. They had Ben Hecht’s screenplay for Kiss of Death as a starting point. Clearly they understood the vibe Douglas was going for and they managed creepy-crime with aplomb.

Casting was very well done because the plot depends on the ‘hero’ being ever so slightly slow to comprehend. He has to be a rather ‘straight’ fellow to contrast with the intense and perverted villain. In fact the French title of the movie was Le tueur au visage d’ange, the killer with the face of an angel. (But the American title was of course far more cool). Among the cast you’ve got Stephen McNally as the tough but clever marshal (looking rather John Dehnerish, I thought)and Emile Meyer as the prison warder. There are two women, Hardy’s wife Ellen (whom he calls Elena), Linda Cristal, and the poor abused May (Dolores Michaels) whom the villain dominates brutally with both physical and mental cruelty.


Visually the film is fine, with Joseph MacDonald at the camera working the black & white masterfully, especially good on shadows.

He looks forlorn as well he might. Good Joe MacDonald photography, though.
At the time, movie musicians were on strike and Fox re-used the Robert Wise/Bernard Herrmann score from The Day the Earth Stood Still. It works really well.


Now, I should tell you that not everyone likes The Fiend who Walked the West. Brian Garfield, in his fine guide Western Films, calls it “nauseating flapdoodle”. Others have been equally dismissive. But I think it is absolutely splendid. 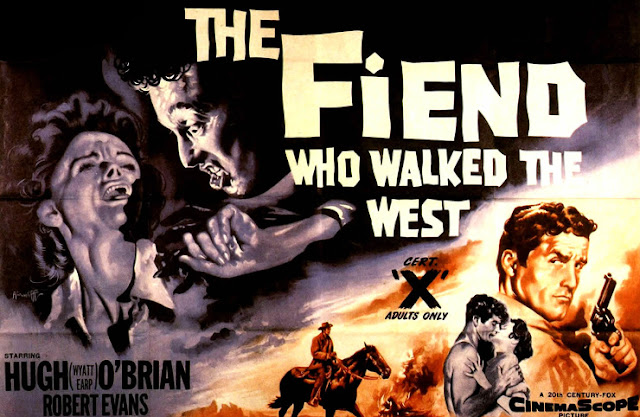