Southwest Passage is a curious Western in some ways in that it centers on a bold explorer/pioneer, Edward Fitzpatrick Beale (Rod Cameron), trying to find a way into California by traversing what looks sometimes like the Sahara with a train of camels. It’s not every day you get camels in Westerns (though it has been known). 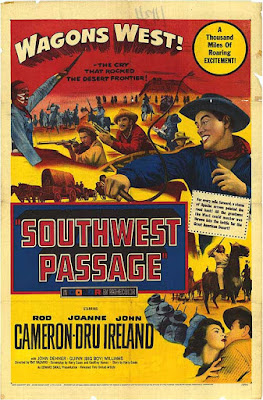 In other ways, the movie is a classic mid-50s B-Western. It was produced by Edward Small’s company Eclipse, which had been going, under different names, since the early days of talkies and had produced the 1936 Last of the Mohicans (the Randolph Scott one), the 1940 Kit Carson, and the 1951 Texas Rangers (the George Montgomery one), among other Westerns. 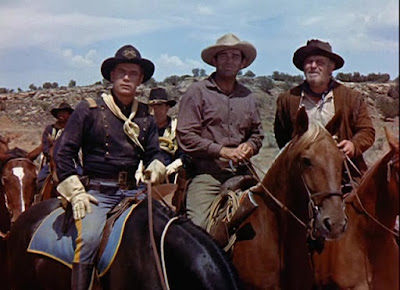 Rod Cameron leads the camel train. That's a bearded Big Boy on his left as scout.
Small got Ray Nazarro to direct. Nazarro had started directing shorts on Poverty Row in the 30s and was then an assistant director on Columbia Westerns for years, directing himself from 1945. He made a lot of those Durango Kid ones starring Charles Starrett. Later he did TV work (especially Annie Oakley and Fury) but for the big screen he did quite a few Rory Calhoun, George Montgomery and Sterling Hayden oaters. One of my favorites was The Lone Gun, the same year as Southwest Passage. B-Westerns, maybe, but he knew his job and his pictures were solid and reliable. 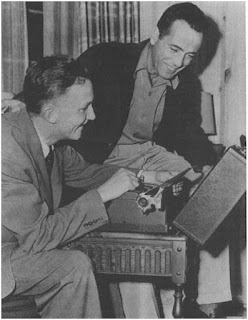 Ray Nazarro, right
One good thing about Southwest Passage is the cast. Cameron was OK, as always, tall and solid if a touch uninspired, but backing him up were Mr. & Mrs. Ireland (John Ireland and Joanne Dru), Guinn ‘Big Boy’ Williams as the scout Tall Tale, Douglas Fowley as an outlaw gunman, Morris Ankrum as an alcoholic charlatan doctor and a perfectly splendid John Dehner as the really nasty bad guy. It was an excellent line-up.

I always liked John Ireland (left) in Westerns. He was one of those who tended to get small parts in A-pictures or the lead in Bs but that’s OK. He had a stunning start as Billy Clanton in My Darling Clementine and Cherry Valance in Red River (you can’t ask for better beginnings than that) and of course Joanne was in Red River too. He would return to Tombstone later as Johnny Ringo in Gunfight at the OK Corral. He shot Jesse James for Samuel Fuller in Fuller’s trash-B in 1949, was Bitter Creek in Gordon Douglas’s Doolins tale the same year, and was often the bad guy – try, for example, the excellent Vengeance Valley in ’51. I thought he was outstanding in the Lippert B Little Big Horn that year too. He was director, producer and one of the stars of the interesting Hannah Lee: An American Primitive, a Tom Horn-ish story, in 1953. It was a good Western career. In Southwest Passage he plays a bank robber on the run who buys the drunken vet’s frock coat and doctoring bag in the first reel and joins Rod’s camel expedition posing as a doctor to get to California.

And Joanne Dru (right, in She Wore a Yellow Ribbon) was great, I thought. She plays Ireland’s inamorata (so the lovey-dovey scenes are realistic) who stands by her man though she disapproves of bank robbin’. “You can’t start a clean life on dirty money,” she tells him gravely. She catches up with the train and is allowed by Cameron to join. She finds Rod noble and bold and John starts to get a bit jealous. Joanne too had a stellar start in Westerns, as Tess in Howard Hawks’s Red River and then as the ribbon-wearing Olivia in John Ford’s She Wore a Yellow Ribbon, then back with Ford in ’50 as Denver in Wagonmaster. Wow. Vengeance Valley and Hannah Lee followed, and this was her sixth oater. She was beautiful and strong. She did do some weaker Westerns later but really, after that start there was nowhere else but down.


Apaches and thirst beset the train, as was usual in such Westerns. This one was made towards the end of the brief early-50s 3D craze, so there are barrels thrown into the camera, Big Boy lunging at us with a pitchfork, and so on, all to give the audience a thrill, but of course 99% of viewers saw it in 2D, and we all do now. It was shot by Sam Leavitt, an Oscar winner who, however, did few Westerns (he was DP on Major Dundee, though). The Kanab, Utah locations are well photographed, I must say, in good color.


The train’s mule skinner (Dehner) is very unpleasant. He thinks it’s amusing to force pork into the mouth of one of the Arab camel drivers, and he lusts after Joanne, especially when Joanne is bathing in one of those convenient pools that they often just happen upon in Westerns when the heroine wants a bath. He overhears Joanne and John talking about the gold and determines to get it for himself. He’s not too bright though (in fact Big Boy tells him, “When they gave out brains in Tennessee you musta been in New Orleans”) so he comes to a sticky end. 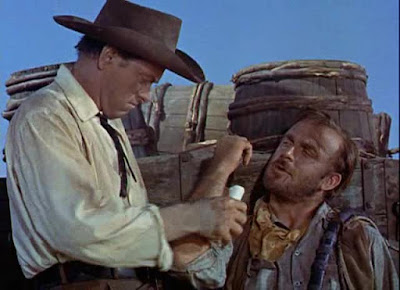 'Doc' Ireland patches Dehner up - but will eventually do the reverse
Well, the Apaches mount a big attack at the end, Ireland is heroic and saves the day, then gives up the gold, thus securing Joanne, and they all (except John Dehner) live happily ever after. 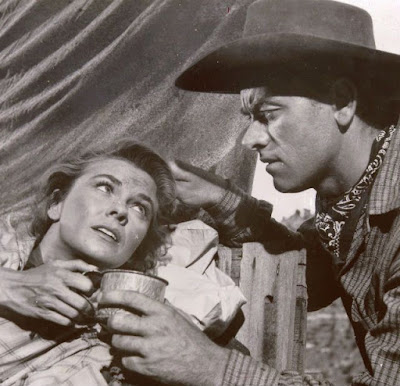