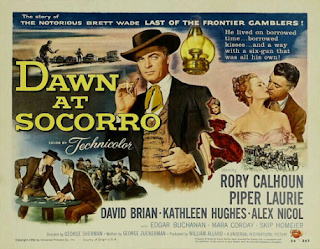 Dawn at Socorro, a Rory Calhoun Western of 1954, is a real corker, absolutely outstanding.


If you like 50s B-Westerns, you’ll really go for this one. As in most Universal offerings of the period you get high productions values, with good photography of attractive Western locations (in this case Apple Valley, California, shot by DP Carl Guthrie). You get professional directors who may not be John Ford or Anthony Mann but who really know their business – in this case ultra-experienced George Sherman, and I think it may have been Sherman's best ever Western. You get a well-crafted script, this time by novelist/screenwriter George Zuckerman, famous for The Tarnished Angels (Faulkner’s favorite adaptation of any of his novels). And you get really good Western actors, not top Hollywood stars necessarily but more-than-competent folk who do a fine job.


It was Rory Calhoun’s ninth Western and, since debuting in the genre with Guy Madison in Massacre River in 1949, he had really established himself in the saddle (or in this case the gambler’s chair). He’d been in A-pictures too: Fox’s fun A Ticket to Tomahawk in 1950 (slated for John Ford though in the end it was yanked from him) and the same studio’s Otto Preminger-directed River of No Return earlier in ’54. But he was really a B-Western lead, and, I’d say, one of the best of them too. In Dawn at Socorro he is a consumptive Southern gambler, and if that suggests to you Doc Holliday, that’s no surprise because the first half of the movie is distinctly OK Corralish. 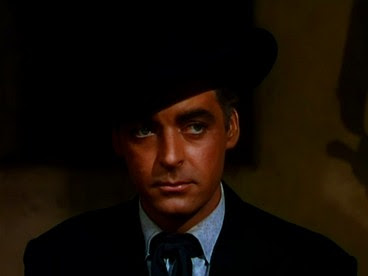 Doc Calhoun
June 1871. Lordsburg. We are introduced to the characters by a narrator, the town doc (Roy Roberts). We meet Old Man – no, not Clanton but Ferris (Stanley Andrews, very Clantonesque) with his three lowlife sons Earl (Lee Van Cleef), Tom (Richard Garland) and Buddy (Skip Homeier). It’s a great line-up of bad guys. Homeier, you will certainly know, specialized in punk-kid roles and had done ever since he shot Gregory Peck in the back in The Gunfighter. Here he excels himself as a nasty, spoiled brat, drunkenly forcing his unwelcome attentions on a saloon gal. 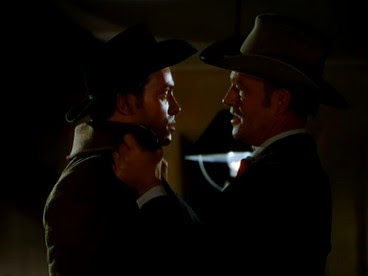 Marshal Millican gets tough with punk Skip
In the saloon we also meet very Wyatt Earpish Marshal McNair (James Millican looking splendid in frock coat and mustache) and his Morgan Earpish brother Vince (Scott Lee). They are playing poker with smooth (and equally frock-coated) Rory, who is of course winning, while coughing into a handkerchief. He is very cultured and plays Beethoven on the piano for the saloon gal (Kathleen Hughes). The other card player is the smarmy Dick Braden, saloon owner in Socorro, a couple of hundred miles to the north, played by habitual blond smoothie-villain David Brian – it could just as well have been Lyle Bettger.

Brian excellent
Well, Rory and the marshal are eventually obliged to gun down the punk Buddy after he tried to shoot the marshal in the back (he seemed to have the habit) and so of course the other Ferrises swear vengeance and issue a challenge to meet at dawn in Keane’s Stockyards. We therefore have the Gunfight at the Keane’s Corral. Old Man Ferris and Tom are shot dead but Earl escapes and swears blood for blood. 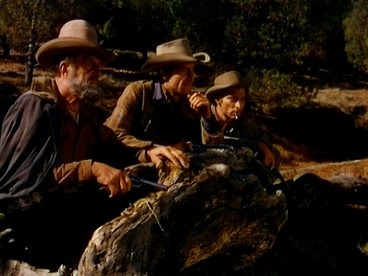 The Clantonish Ferrises wait for dawn... 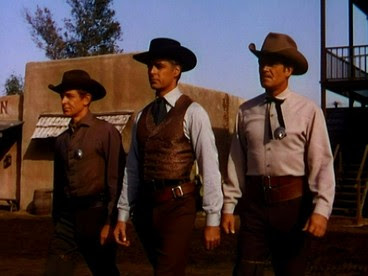 ...and sure enough, here they (Earpishly) come
This is all really classic Western stuff, and it’s very well handled too.


We now also meet the main girl, Old Man Ferris’s daughter Rannah, cast out by her tyrannical pa and destined to become a saloon girl (50s euphemism for prostitution). She is played by the gorgeous Piper Laurie, rather too refined and elegant to be a white-trash rancher’s daughter but never mind. She is taken up by the oily Braden who will entice her to his den of iniquity in Socorro. 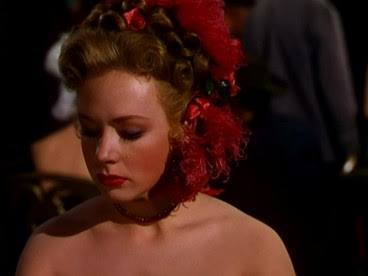 Piper stunning as Rannah
In smaller parts you can also spot Paul Brinegar and Forrest Taylor. Rory, revolted by the death in the stockyards, wants to hang up his guns and get out of this dead-end life. He decides to take the doc’s advice and relocate to Colorado for his health. He will go by stage to Socorro where he can take the train. 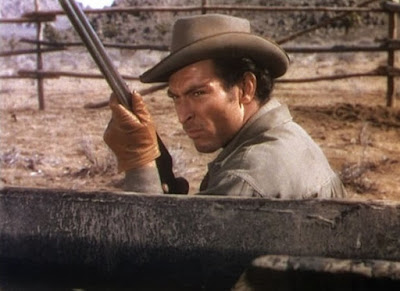 Lee waits in ambush
So the action now shifts from Lorsdburg to Socorro (Rory has to dispatch Van Cleef with his rather fine Henry who ambushes him on the way) and, oh joy, who is the plump and cynical marshal of Socorro? Why, Edgar Buchanan! Splendid. 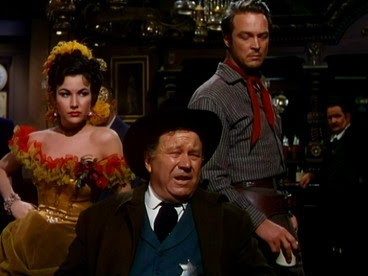 Marshal Buchanan is a bit out-classed
Marshal Buchanan has a bit of a problem with all these fast guns in town. The former Ferris henchman, who was too drunk to take part in the shootout at the Keane’s corral back in Lordsburg, is Jimmy Rapp (Alex Nicol, excellent) who now pursues Rory, bent on gunning him down (if he can stay sober long enough, for he is clearly drinking to deaden some sense of failure or guilt or both). He has a visceral hatred for Rory and a murky past for the two is hinted at. Rapp is the Ringo figure, of course. 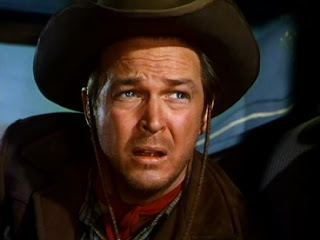 The Johnny Ringo figure
Rory met Rannah on the stage and was taken with her. Now he wants to free her from the clutches of evil smoothie Braden, who, like Rapp, wants Rory dead. It all builds up to a climax. The scenes in Braden’s saloon are brilliantly handled by Sherman, and the tension really mounts. 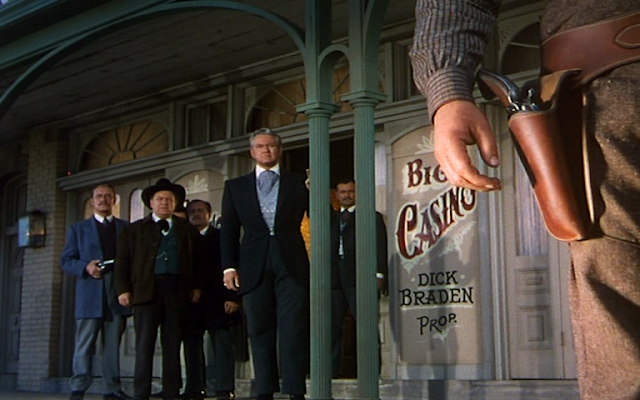 There will be blood
There’s even a classy suggestion that the antagonists know that they have wasted their lives and might just as well die a dusty death in a squalid gunfight as anything else. “Who’s coming after you?” Rory is asked. “My past,” he answers, “every dark, miserable day of it.” The Socorro saloon girl (Mara Corday) asks “How do you turn back the clock?” but of course no one can answer. It’s all actually rather thought-provoking and melancholy. 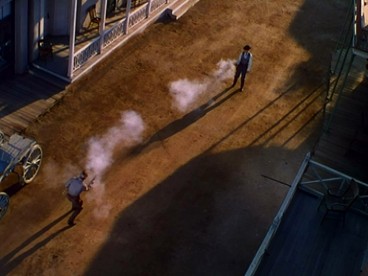 Superb
The final Main Street showdown is as classic a Western mise-en-scène as you will ever see. 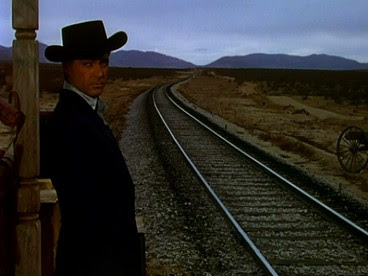 Will he take the train to nowhere?
All this is absolutely first class. My only regret is that Braden didn’t pull a derringer when confronted by Rory. The director and writer slipped up there, for Brian was the perfect candidate for the sneaky hideout gun. Still, you can’t have everything. And all in all, quite frankly, Dawn at Socorro is a top-drawer B-Western of impeccable credentials and merit. Four revolvers, e-pards, and B-Westerns don't get that accolade every day of the week! 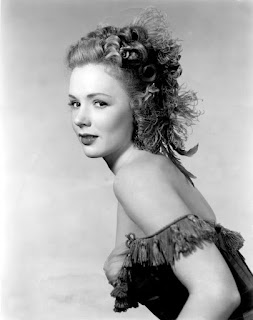