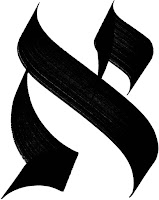 Oh, I know I bang on endlessly about exclamation points. Both regular readers will know of the ALEPH, the Arnold Ludicrous Exclamation Point Hypothesis, which, well, hypothesizes that any Western which has an exclamation point in the title is, ipso facto, weak. They had to add the punctuation mark to make a dull plodder seem exciting. Think of McLintock!, Bandolero! or The Jayhawkers! QED.


As if to prove the rule, there are even Westerns which need exclamation points but which don’t have them. If ever a title merited the emphatic '!', it was Republic’s mid-30s John Wayne oater Westward Ho, for surely, Ho is a cry, a yell, a holler. Yet, nay, here is one Western in which the producers and studio restrained themselves admirably. A discreet Westward Ho is the title.


But enough foolishness. What of the movie? 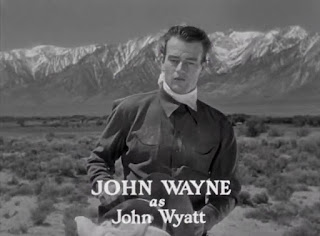 Westward Ho was one of eight oaters the (still relatively) young Wayne (right) made in 1935, and it was the first of the many B-Westerns he would make for Republic all through the 1930s and 40s, right into the early 50s. Indeed, it was the newly-founded Republic’s first picture. Studio boss Herb Yates had acquired several Poverty Row outfits, including Monogram, and merged them to found the new enterprise. Wayne brought with him from Monogram his essential back-up team of Paul Malvern, producer; RN Bradbury, director; Archie Stout at the camera; Yakima Canutt doing the stunts (and often appearing as a henchman); and Lindsley Parsons at the typewriter, tapping out predictable (note, I do not say corny) yet lovable ‘plots’. It was a winning team. The cowboy flicks they churned out at a rate of four or five a year were, yes, juvenile B-Westerns for the mid-West masses, but they were also, in their under-an-hour, black & white way, quite watchable, even, dare I say, verging on the classy, certainly way better than comparable Poverty Row offerings of the period. Westward Ho had double the budget of the Lone Star flicks – a princely $24,000.

The team: Archie Stout, cinematographer, director RN Bradbury (with his son Bob Steele), Lindlsey Parsons, writer, and Paul Malvern, Producer
Westward Ho has the distinction and honor of being one of Dickie Jones’s very first Westerns. He plays the young Jim Wyatt, pluckily going West (toting a Winchester) with his brother John (who would grow up to be John Wayne) on a wagon train with his parents, who are brutally murdered by a gang of outlaws led by the evil Ballard (Jack Curtis, alternately a marshal or badman in all these Wayne Westerns). The bandits also steal away Jim, who later grows up to be Frank McGlynn Jr., habitual bad guy, and indeed, being ‘adopted’ by the villains, he turns out to be villainous too, despite being John Wayne’s brother. 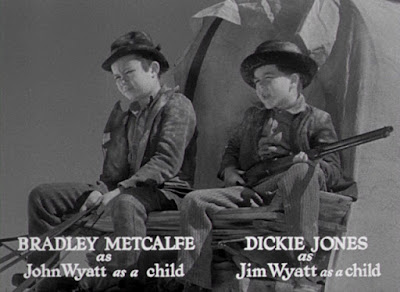 Dickie Jones would of course become the archetypal plucky lad in Westerns, rivaling Jim Hawkins of Treasure Island as daring youth, with whom the majority of the audience of these films (average age, 10) could most happily identify. 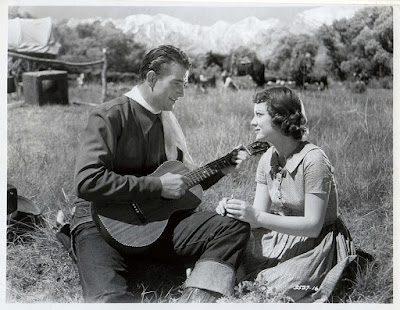 He serenades her. But fortunately it's dubbed (by a rich and fruity baritone)
Amusingly, this film opens with the portentous text:


This picture is dedicated to the Vigilantes, builders of the New Empire of the West … Men who gave their lives to purge the new frontier of lawlessness.


Ah, those innocent days of yore (the 1930s) when audiences could actually believe that vigilantes were goodies. 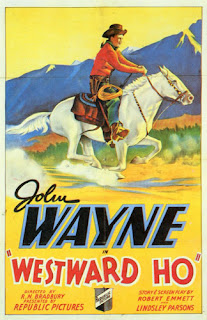 We open with a wagon train moving West to the strains of a rather dirge-like title song crooned by cowpokes softly strumming their guitars. It’s 1849. After the outlaw raid we move to 1866 (though obviously all the costumes and guns are 1880s) when John Wyatt is grown and determined to bring to justice the perpetrators of the murderous raid which robbed him of his ma ‘n’ pa and little bro. The pusillanimous authorities won’t pay for his projected force of law ‘n’ order, so he raises a band anyway, and decks them all out with white horses, black duds and white bandanas. The Vigilantes are born.


Thenceforth action is the rule as the vigilantes chase down and round up (though never hang) outlaws, including ‘Black Bart’s gang’. Their leader, bold John Wyatt, will not cease until he brings in the gang that murdered pater and mater. There’s mucho gallopin’ and shootin’.

Good news: John’s second-in-command in the vigilantes is Carter – none other than Glenn Strange the Great (left). Glenn Strange (along with Leo Gordon) is my fave henchman. He henched better than almost anyone. Six foot-six, thin-mustached Glenn, who was reputed to be an eighth generation grandson of Pocahontas (believe that if you will), is perhaps best remembered for being Frankenstein's monster in those Universal films of the 1940s, but for us Westernistas he is Sam Noonan, bartender on Gunsmoke, and baddy-henchman on countless B-Westerns. Any oater with Glenn in it is worth watching.


At one point John goes undercover, as John Allen (an alias he used in others of these Westerns) and joins up with a cattle drive, hired by Lafe Gordon (Jim Farley, another regular of these pictures) who, naturally, has a glam daughter (Sheila Bromley) who falls for Duke (and vice versa, natch). This drive is joined by sneaky Jim, casing the rustlin’ job for his boss Ballard. Of course he doesn’t know he’s John’s bro, nor does John suspect fraternity with this dubious type. 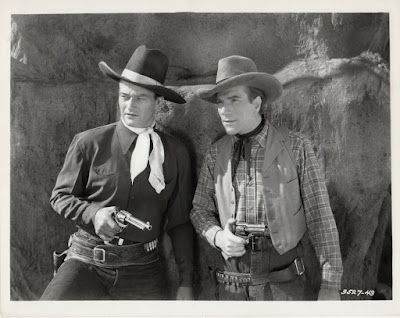 Brothers, did they but know it
Well, it all pans out well in the end, as if you had any doubts. Ballard’s henchman Red (Canutt) spills the beans and the villain is thwarted. It must be said, though, that Ballard perishes in a wagon crash that, I fear, was a horrendously cruel stunt involving the death or maiming (and thus probably death) of the two lead wagon horses. Gosh, I hate those horse falls they did so routinely. 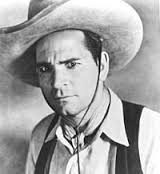 Henchman Yak
The print is good quality on this one (on many other similar pictures it’s pretty poor) and it’s available on YouTube. There are some surprisingly good Lone Pine locations. You could certainly give it a go. 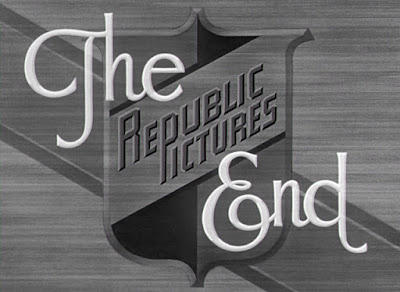