My late lamented Pa always told me that Tom Mix was the greatest screen cowboy of them all, and you know how fathers have an annoying way of turning out to be right? After a lifetime of watching Westerns of every hue and era I have a sneaking suspicion that howsoever flashy, over-the-top, vulgar even, that Tom Mix might have been, he nevertheless had more pzazz, more élan, more silver-screen star-power than any celluloid cowboy before or since. 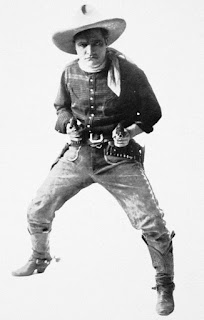 The great Tom Mix
One surviving movie that allows us to appreciate that, and with Tom at the height of his powers, is The Great K & A Train Robbery of 1926. Tom was then 46, with make-up applied with a trowel, and in some ways perhaps his glory days were behind him but he was still doing all his own stunts. The movie is a classic Mix Western. At Fox, where he earned an astonishingly high salary, he had made nine Westerns in 1922, seven in ’23, eight in 1924 and seven in 1925. He had had big hits with Sky High in 1922 and Riders of the Purple Sage in 1925, and these are still quality movies today. If you really want to appreciate Tom Mix, don’t just watch The Miracle Rider, a talkie serial of 1935 when comeback Tom was in his mid-fifties and uncomfortable with sound; view some of the great silent Westerns that are still extant, like The Great K & A Train Robbery. 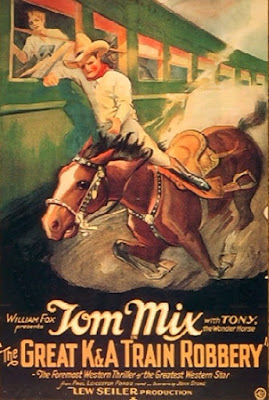 Tony does his stuff
Of course the idea at the heart of the plot of a train robbery harks right back to what many regard as the first Western movie of them all, The Great Train Robbery of 1903. Train robberies were a standard plot element and always would be. Westerns featuring Jesse James in particular would focus on this aspect and as late as 1973 John Wayne was making The Train Robbers. Wayne may have had a special fondness for the plot device because aged nineteen he was an uncredited extra on The Great K & A Train Robbery as well as prop boy.


One great thing about The Great K & A is that the exterior scenes are filmed at the Royal Gorge. Now, if, like me, you have visited that great Colorado location and ridden the railroad (now, sadly, no longer steam driven) from Durango to Silverton, you will revel in any movie that features it, and many do. Denver & Rio Grande, Wayne’s The Sons of Katie Elder, Randolph Scott in Santa Fe, Joel McCrea in The Lone Hand, The Maverick Queen, A Ticket to Tomahawk, Colorado Territory and Night Passage, to name but a few, no matter how good or bad the Western was, it’s always good to see the Royal Gorge, and indeed as you know one of my own novels (for of course you have read them all) features the Royal Gorge railroad war of 1879. 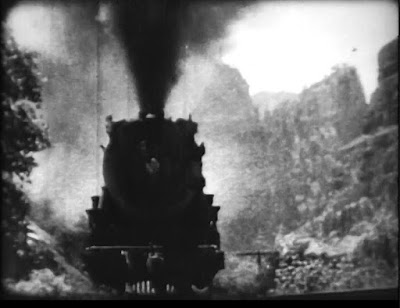 Royal Gorge, very nice
The Great K & A opens with some classy aerial, then rooftop shots of the train, ‘The Westerner’, a crack locomotive, we are told. The cinematography was by Daniel B Clark, a Fox Western specialist who worked on a lot of Tom Mix oaters, and the direction/production was by Lewis Seiler, who again worked closely with Tom at Fox in the 1920s and in the 30s moved to Warners to direct gritty gangster flicks.


The print isn’t that good, I’m afraid, and it really needs (and would merit) a restoration, but it’s still more than watchable.


It is to us a very predictable plot but perhaps it wasn’t quite so obvious to mid-20s viewers. A railroad magnate, Cullen (Will Walling) is frustrated that his trains are being held up so often by a gang of train robbers who always seem to know when bullion is being carried. We take one look at his oily secretary Holt (Carl Miller) and deduce from his caddish mustache that he must be in cahoots with the bandits and tipping them off, and sure enough we are soon proved right. 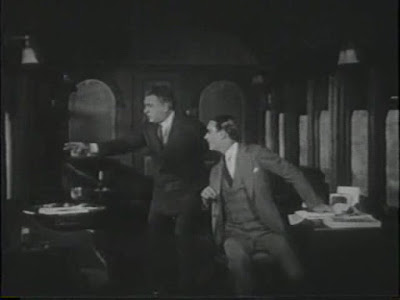 Railroad boss Cullen (standing) with crooked sec Holt
A detective has been sent from Texas but hasn’t arrived yet (or so they think) but of course it is Tom and he’s already on the job, under-cover and pretending to be an outlaw. He’s Tom Gordon (he was always Tom Something) and because the railroad boss has a glam daughter, Madge (Dorothy Dwan, Dorothy in the silent Wizard of Oz the year before) – for it was compulsory in them days to have a glam daughter – naturally Tom Gordon falls head over heels for her, and, it must be said, vice versa. 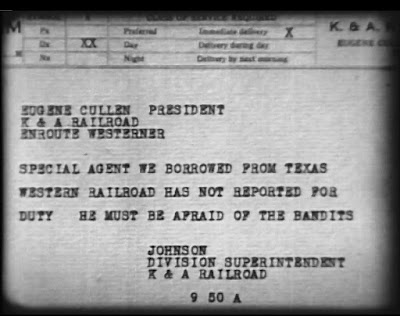 As if...
Of course Tom, greatly aided by his second-billed horse Tony, who has, we are told, human intelligence, foils the bad guys, unmasks the crooked secretary and wins both the undying gratitude of Mr. Cullen as well as his fair daughter’s hand. No spoilers here – you knew that was going to happen. 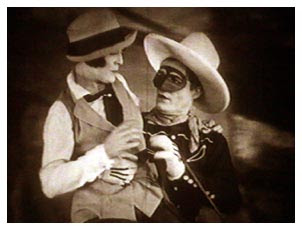 He's masked at first, pretending to be a robber
There are some pretty spectacular stunts, with Tom shimmying up and down various wires and so forth. At one point he receives a bullet hole in his Stetson (and in those days it was a real marksman shooting real bullets, very likely Tom's pal Sid Jordan). The story rattles along at the pace of The Westerner at full steam and there is plenty of action, though I could have done without the stunt where Tony has to be ridden from a second-story window into a pool. I could also have done without the ‘comic’ scared Negro Snowball (Curtis McHenry) that they felt obliged to have in those days, but I guess standards of what is funny and appropriate change with the times. 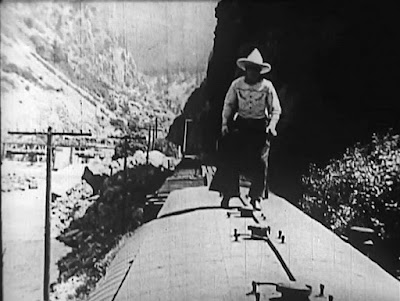 A walk in the park for Tom
There’s a tramp, DeLuxe Harry (Harry Gripp) who has earned his soubriquet by only riding under the cars of railroad magnates, and Tom saves him when his hammock gives way. He turns out to be a former Army colleague; they were in the Signals Corps together at Verdun - so we can date the story to being a present-day (1920s) one. This comes in handy when DeLuxe overhears the fiendish plot and is able to signal Tom across the torrent by flag semaphore, which of course Tom readily understands.


Many Westerns of the era were set in this time-warp period when most characters wore modern clothes and had contemporary gadgets yet cowboys with six-shooters on their hips roamed the West on their horses at the same time, robbing trains (or foiling robberies). 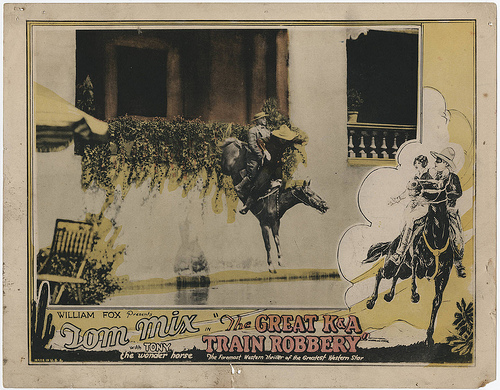 A must-see
The bandits have an excellent cave lair which you have to swim to get into, and this provides a good setting for the showdown shoot-out.


The last shot is of the receding train with Tom and Madge riding on the cow-catcher and Tony trotting with them, ignorant of the dictum about three being a crowd. The End.


Seriously classy stuff, this, 53 minutes of merry mayhem, and definitely a must-see for all Westernistas.