The heroes and their horses

A fiery horse with the speed of light, a cloud of dust and a hearty "Hi-yo Silver" - the Lone Ranger! 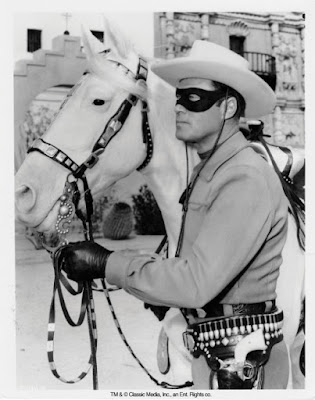 Speed of light, eh?
Yup, horses were far more than the basic means of transport in the West and in the Western. There is a whole myth attached to them.


In many movies, certain Western actors used the same horse again and again and they became part of the mystique. Everyone knows that Roy Rogers’s horse was Trigger (who was so ‘intelligent’ that he could rescue Roy from scrapes), and The Lone Ranger’s horse was Silver and Tonto rode Scout – as did Johnny Mack Brown, for a while. Buck Jones had a Silver, too (the animal died in a tragic fire in 1942). 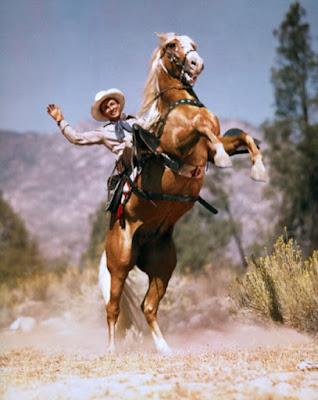 The smartest horse in the movies
William S Hart started it all. He had his pinto Fritz, right back in the 1910s, so it’s a long tradition. Tom Mix’s steed was Tony (though in fact he used Blue for many of his Westerns and Tony Jr. or Tony II for the later ones). There’s a good in-joke in Django Unchained (2012) when Schulz introduces himself and his partner, as well as their horses, Fritz and Tony. 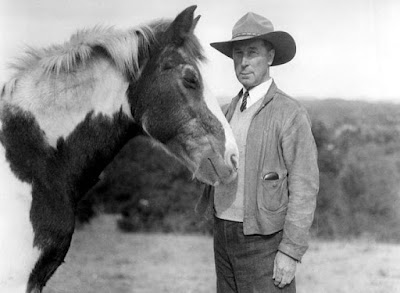 They both aged, sadly
Matt Dillon and his alter ego James Arness rode Buck, not just on Gunsmoke but in big-screen outings like Gun the Man Down in 1956. John Wayne had Duke – and Tim Holt had a Duke too - and in fact most of the cowboys of the silver screen had a named horse, often a flashy white one, whose names the juvenile audiences all knew - Tex Ritter’s White Flash, for example, or Fred Scott’s White King. 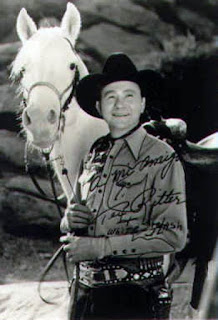 White Flash (left)
Hopalong Cassidy may have dressed all in black, unusually for a goody, but Topper was bright white. These mounts were characters, and enormously popular, in their own right. There were spin-off comics for the beasts and some, like Gene Autry’s Champion the Wonder Horse, even got their own shows – though Autry had several different horses with that name. No wonder Westerns are sometimes called horse operas. 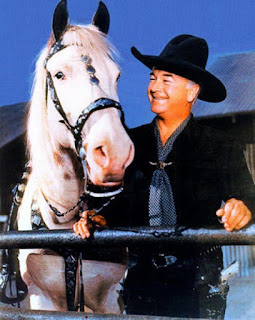 Hoppy (right)
There were even talking and singing horses - unfortunately.


One of the best mounts was Pie, James Stewart ’s horse. Pie appears again and again and even gets a mention in The Far Country (1954) where he wears a little bell on the saddle horn. Pie was a beautiful sorrel, intelligent, perky and adorable. In fact Pie didn’t belong to Stewart at all but the relationship was so close that the director of many fine Westerns with Stewart, Anthony Mann, said, “I swear the horse looks back at him and smiles.” Stewart’s friend Henry Fonda, who was a talented amateur artist, did a water color of Pie, treasured by Stewart, on the set of The Cheyenne Social Club (1970), just before Pie died. 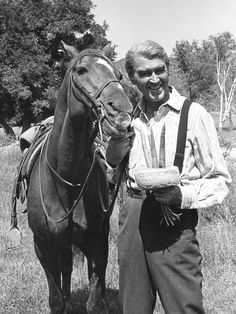 Real pals
Randolph Scott’s Palomino Starlight was also a gorgeous looking horse. Many of the horses, like Starlight, were lovely creatures. Some Westerns concentrate on the sheer beauty of running horses with scenes of running herds, swirling and galloping. Try The Violent Men (1955) or Broken Trail (2006), for example. It’s a joy to watch the horses run. 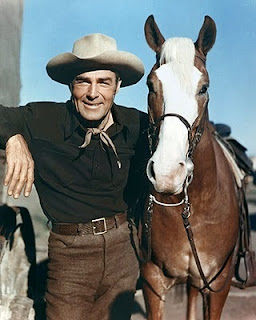 Pardners in Western after Western
But they weren’t all oil paintings, these cowboy horses. In the Audie Murphy Western Tumbleweed (1953) Audie acquires the sorriest looking nag you’ve ever seen. But Tumbleweed saves the day in the last reel by being the fastest horse in the West. 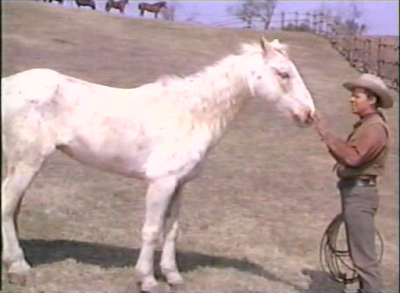 Beauty isn't everything (luckily)
It is amusing to compare actors in their horsemanship. Just watch Ben Johnson, say, or Glenn Ford riding: it’s poetry in motion. Others actors were hopeless. Jack Palance in Shane was famously so bad he had to lead his horse on his first entry; he couldn’t ride it. Stuart Whitman, riding in the title sequence of Cimarron Strip (1967), all arms and elbows, is such a bad rider it’s hilarious. An amusing story is told of Ernest Borgnine, on the set of the André De Toth-directed The Stranger Wore a Gun (1953). One day De Toth asked Borgnine if he could ride.
‘Can I ride? Like the wind!’ the actor replied.
Borgnine mounted a horse and with a band of other riders, did a scene in which they had to come galloping down a hill. According to De Toth, Randolph Scott’s double, who was riding next to Borgnine, missed his mark.
‘Once more, please,’ De Toth said.
‘Why? Didn’t I ride like the wind?’
‘You did great. Ride like the wind again.’
‘Yeah?’ Borgnine replied incredulously. ‘Well, I have no idea what I did that was great. This is the first time in my life that I was on a damned horse.’


An illuminating treatment of horses and their importance and the way people treated them is in the book Lonesome Dove by Larry McMurtry and the wonderful TV movie made from it, Lonesome Dove (1989). Captain Call’s mount, the Hellbitch, or Newt’s, Mouse, become essential characters of the story. When Call gives the Hellbitch to Newt it is a pivotal moment of the story. 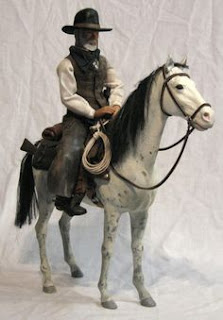 You can even get a Hellbitch miniature
In The Misfits (1961) horses are a tragic symbol of the end of the West as mustangs are rounded up for slaughter.


Many Westerns center round the catching of a wild stallion, which the heroes track and do everything they can to lasso. Look at Black Horse Canyon (1954) as just one of many examples. Watching, though, you might hope they don’t catch the splendid beast. You want the wild horse to stay free. They rarely do.


How many Westerns have you seen that featured a bronc-busting scene? There are hundreds and hundreds of such movies. In Western Union (1941), The Unforgiven (1960), The Electric Horseman (1979) and countless others horse-taming scenes are a key moment in the picture. In cheaper pictures this scene was fudged with the actor riding a fake horse but in better movies they used a stuntman and it looked real. Busting a bronc was a symbol of taming the wild frontier, which was a central theme to so many Westerns, and it also proved the prowess and skill of the hero. Sometimes bronc busters are the heroes, as in Monte Walsh (1970, 2003), for example. Just occasionally there is a mythic horse that cannot be broken. And talking of broken horses, The Horse Whisperer (1998) cured psychologically damaged beasts as they gradually responded to his gentleness and care. 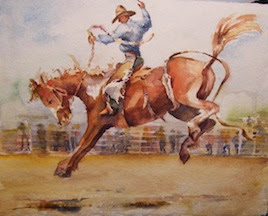 Ride 'im, cowboy!
Of course in the real West horse stealing was a hangin’ matter. Many films have more or less (usually less) official stringings-up because of horse theft. The most violent vigilante campaign in Western history, in Montana in 1882-3, happened when men rounded up over a hundred bandits for horse theft. It was a capital offence alright, far worse than stealing a car today. Of course leaving a person afoot in much of the West was likely to kill him. Still, they do seem to have over-reacted…


One major problem for any horse lover, or indeed anyone with any sensitivity to the plight of animals, is the brutal abuse of horses in so many Westerns. Early Westerns had no compunction at all about killing horses for a more dramatic scene. Cecil B DeMille was especially guilty. Horses were spurred over cliffs or through shop windows. They were brought crashing down with trip wires. Some of the wranglers were very expert and managed to give the appearance of horses being killed or maimed without harming the animals. But so many horses died.

'Acceptable'
William S Hart was an exception. In Singer Jim McKee (1924) there was a scene in which Hart rode Fritz off a cliff into a river. But Hart didn’t want to hurt Fritz, or another stunt horse, so a fake Fritz was constructed. Hart was filmed galloping to the edge on Fritz, but then, on cue, the horse did a fall to one side. The mount was led away and replaced by the fake Fritz, held up with wire. When the wires were cut, both ‘horse’ and rider fell into the gorge. Hart was badly shaken by the fall, but the footage, once edited, was frighteningly realistic – so much so that the Hays Office called Hart in to explain why he had been so cruel to Fritz.


But Hart was a rare exception. Countless horses died or were maimed in filming early Westerns. It came to a crisis in the filming of Fox’s Jesse James (1939) when director Henry King allowed horses to wear blinkers with eyes painted on them and then they were ridden over a cliff, 75 feet into white water. They were killed, of course. There was an outcry and the Hays Office worked with the American Humane Association to produce rules for future animal performances. So while the Hays Office was notorious for its over-fussiness (insisting, for example, that Betty Boop be dressed more modestly) they did a great service in the case of Hollywood horses. Since the 1940s Western movies have been monitored by the AHA or SPCA and carry the statement that “No animal was harmed in the making of this film”. Thank goodness. 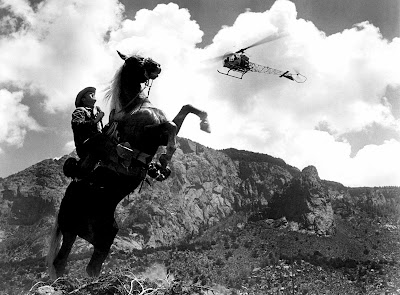 Times change. But not a cowboy's love for his horse.
Kirk Douglas in Lonely Are the Brave (1962) could have escaped the law but to do that he’d have to desert his capricious mare, Whiskey. That ain’t gonna happen! The cowboy and his horse were often pals and the relationship was closer than that with any durned gal. In Son of Paleface (1952) Roy Rogers spurns the ladies in favor of his horse. After all, he croons, the four-legged friend with two honest eyes will ask no questions and tell you no lies. I’m afraid the singing cowboys of those days weren’t militant feminists…


But the horse was more than a mount, much more.


Bob Allen rode Pal. The name said it all.