It is really astonishing that John Ford (below) not only made three great Westerns in three years, with what we now call the cavalry trilogy (Fort Apache in 1948, She Wore a Yellow Ribbon in ’49 and Rio Grande in ’50) but in between them he made two other oaters, 3 Godfathers between Fort Apache and Yellow Ribbon, and Wagonmaster between Yellow Ribbon and Rio Grande. He made five Westerns in three years – not just any Westerns, either – as well as a non-Western comedy When Willie Comes Marching Home (1950). Talk about prolific. 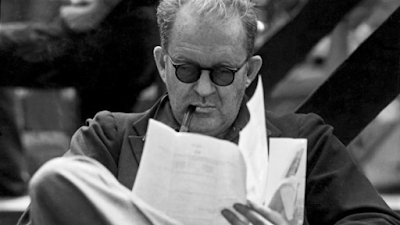 It was a deliberate policy. He and his partner in Argosy Productions, Meriam Cooper, had had a disastrous failure with The Fugitive in 1947, an expensive, arty but bad film which was a commercial and critical flop, and Westerns in the late 40s and early 50s were a bankable product which would help to refill the coffers.


Ford also liked Westerns. He may not have just been making the best of it when he said that making Westerns “gives me a chance to get away from the smog, … to get away from this town [LA], to get away from people who would like to tell me how to make pictures. You’re working with nice people – cowboys, stuntmen, that kind of person. … It’s a great life, just like a paid vacation. I love to make westerns. If I had my choice, that’s all I would make.” It was an exaggeration, certainly, but you feel that deep down it was sincere.


At any rate, after Yellow Ribbon and a short break on his yacht Araner, Ford started work on a wagon-train picture. Ford’s son Patrick had read a book about the Great Trek by the Boers and discussed it with his father as a project. John felt that making racist Boers sympathetic to American audiences wouldn’t be easy but thought the story could be transposed to an historical Western setting, the Mormons seeking new lands and freedom to practice their religion. He put Pat and tame screenplay writer Frank Nugent (who had done both Fort Apache and Yellow Ribbon) to work on a treatment.


Ford got the idea of making the film in the terrain where the real wagon trains went, and wanted to set up locations near Mexican Hat in Utah but it was too inaccessible even for Ford and he settled for the area round Moab. There were great similarities to Monument Valley in the landscape.


Casting was Ford’s forte. John Wayne, for once, was not available, working on his Republic contract after Yellow Ribbon with The Fighting Kentuckian and The Sands of Iwo Jima (he would return to Ford later in the year for Rio Grande). So Ford ‘promoted’ others of his regulars to play the lead parts, notably Ward Bond who was splendid as the eponymous train boss (though billed only fourth, he was paid the most - $20,000), Ben Johnson and Harry Carey Jr. as the happy-go-lucky horse-trading scouts and Joanne Dru as leading lady. It was more of an ‘ensemble’ cast, like Stagecoach, than a star vehicle, but it was none the worse for that. 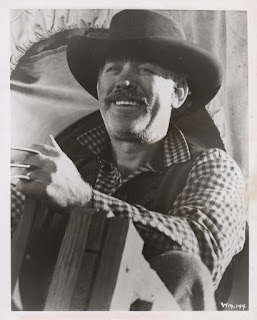 Ward Bond splendid
Ben Johnson is yet again ‘Travis’ and all these Ford Westerns could almost be seen as the further adventures of Travis. He and Carey are very likeable as the wagon train guides and of course they save the day finally. Travis is like Ringo in Stagecoach or York in Fort Apache, the brave leader outside the social unit. Johnson was already a fine Western actor and in many ways he is the star of this picture, even more than the wagonmaster. 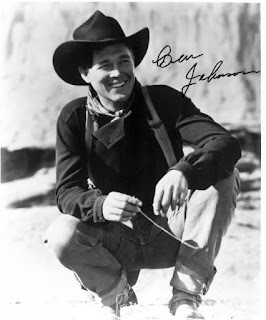 Ben Johnson fine
Ward Bond is wonderful too, though. Pity he didn’t keep on the frock coat he appears in at the start. He looks splendid in it. But he has power and force and is just dandy as the Elder. Bond went on, of course, to be the wagon master on TV in Wagon Train, one episode of which was directed by Ford, and make the role his own. 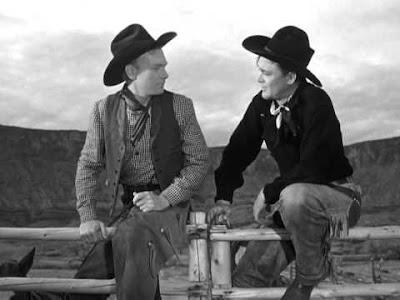 Carey and Johnson, a great team
Of the smaller parts, Ford got Charles Kemper, a B-Western regular and a friend, to be the patriarchal villain, Uncle Shiloh, a sort of Old Man Clanton figure, with James Arness, Hank Worden, Fred Libby and Mickey Simpson (a corporal in Yellow Ribbon) to be his white-trash family. They made a memorable gang of loathsome low-lifes, one which would be the model for Donald Pleasance and his sons in Will Penny in the following decade. In fact Wagonmaster is the only Ford film to start with a scene rather than credits, and that scene is the robbery which establishes the nasty ruthlessness of the Cleggs. Unlike most wagon train Westerns, in this one the Indian threat is fairly low-key, and thirst doesn’t trouble them that much either. It’s outlaws who make difficulties. Everything changes when, quite late in the story, they arrive, including the lighting, which becomes sinister. 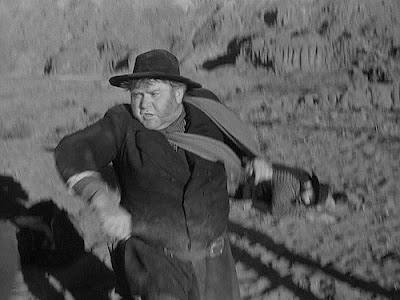 Kemper memorably malevolent as patriarchal villain
Alan Mowbray would reprise his part from My Darling Clementine as an endearing ham. Mowbray is Dr. “Locksley Hall”, no relation to Tennyson I think, but manager of a traveling “hootchy-cootchy show”. It is my dream to work in a traveling hootchy-cootchy show. Joanne Dru plays Denver, a member of Hall’s troupe, a character similar to Dallas in Stagecoach. When girls were named after towns it was a sure sign that they were disreputable. Ben Johnson's character falls for her. 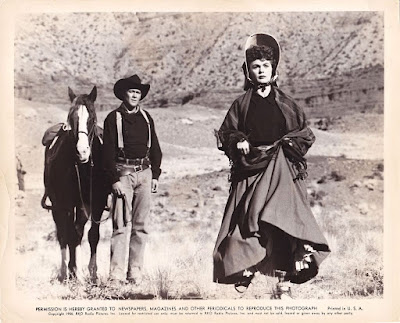 After Red River and Yellow Ribbon, it was Dru again in the lead
Russell Simpson, so often a religious elder of some kind, was ideal as the leading Mormon, keeping feisty train boss Ward Bond on the straight and narrow, and Jane Darwell was given a colorful role as a plump Mormon matron with a twinkling eye and a rather vacant expression. And a horn. The director’s brother Francis Ford was allotted a small part, as usual (Ford usually kept him on the payroll longer than needed as a charitable act, though that kindness did not stop him mistreating his brother). 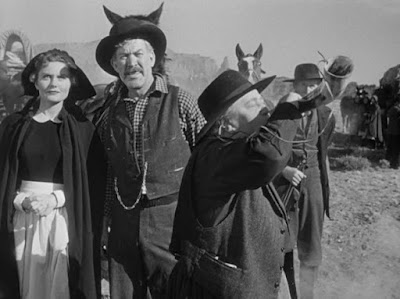 Jane Darwell blows her own trumpet
This time Ford had Bert Glennon as cameraman and after the brief excursion into Technicolor with Yellow Ribbon it was back to black & white. But both Glennon and Ford were masters of monochrome and the picture is visually very fine.


Ford got Stan Jones, who had written Ghost Riders in the Sky, to produce a series of songs for the picture, so much so that it threatened to become a musical. They were mid-twentieth century country songs, hardly suitable for mid-nineteenth century Mormons but Ford didn’t care. Nowadays the songs are obtrusive and constitute one of the weaknesses of the picture. Bert Glennon behind the camera


The production was one of the most relaxed and enjoyable of all Ford’s films. Moab was beautiful and often looked as wild as Monument Valley but it had far more creature comforts. Danny Borzage was there with his accordion. There were impromptu shows in the evenings. Ford seemed in an unusually benevolent mood. He was patient and considerate. Some of the cast must have looked askance, waiting for the poisonous spite to emerge, but this time it didn’t.


The whole picture has a folksy charm and a relaxed, low-key feel to it. The Mormons seem to stop nightly for dances (even once with the Indians) and they appear a benign, cheerful and tolerant bunch. It’s an unusually positive view of Mormonism for Hollywood. No September Dawn or ‘Riders of the Purple Sage’ Mormons these).  But in a way the settlers only happen to be Mormons: they symbolize all those wagon-train hopefuls moving out West. They are rather idealized, salt-of-the-earth pioneers. In his biography of Ford, Scott Eyman wrote, “The motivation of most Ford heroes is social, not personal; journeys and wanderings, not vengeful quests for retribution – group odysseys.” And he adds that “Ford’s Westerns are more about the West itself than they are about Western heroes. Ford’s West is a West you can believe in, a West of splintered floors and ragged, resolute people. Westerns were really Ford’s vision of an idealized America – a democratic community of equals unified by a shared purpose.” 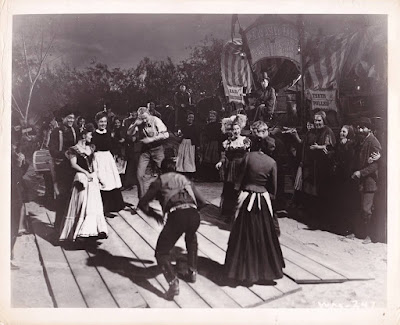 They have dances with great frequency
Later Ford Westerns would be harder, more savage. Wagonmaster is as far away from The Searchers as you could possibly get.


Pat Ford remembered that all his life Ford retained a nostalgic affection for Wagonmaster. “I remember how he loved making it, and how he loved the people up there, and loved the scenery. Wagon Master was pure of heart, and simple, and good, and Frank Nugent and I were pure of heart and simple and good when we wrote it, and maybe John Ford was too.”