It is never quite clear who the trio of the title are. There are so many violent people in the story. But it’s a Charlton Heston movie and most Heston-Westerns are not very good. In fact I would go so far as to say Chuck was only ever good in one oater, Will Penny in 1968. The others he did were poor affairs, or he was poor in them. Strange, really. You’d think gung-ho gun-lover Heston would zoom in on Westerns and shine in them. But he didn’t do that many, not even in their 1950s heyday. He only starred in ten altogether, which wasn’t many over such a long career. He started in 1952 with the rather plodding The Savage. In 1953 Pony Express was pretty well junk and Arrowhead the same year was plain nasty. He was a rather unconvincing Clark to Fred MacMurray’s Lewis in The Far Horizons in ’55, if you call that a Western, and Three Violent People was his fifth in a leading role. He always seemed sour and even sadistic in them. I never warmed to Mr. Heston, I’m afraid. I'm sure he was a nice fellow and all. 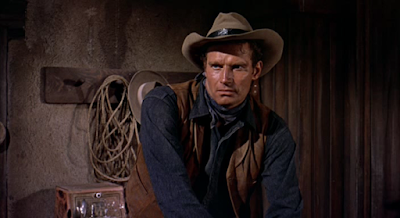 Chuck not good in Westerns, except Will Penny
It’s a Reconstruction story. In Westerns Reconstruction was an unmitigated disaster with no saving graces. Such Westerns always feature evil carpetbaggers crookedly doing honest, decent Confederate ranchers out of their livelihoods. Doubtless that went on but some mention of the positive aspects of the period might have added a little verisimilitude. But then verisimilitude isn’t really what Westerns do, or what they are for. 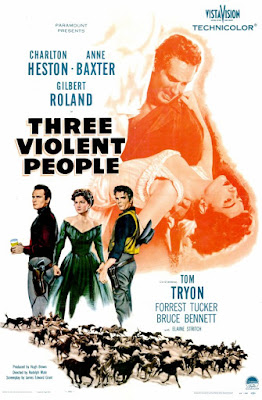 She's very unviolent so I don't get the title
Anyway, we open with Capt. Colt Saunders (I kid you not) as played by Charlton, in a Texas town, being suckered into marriage by the comely saloon gal Anne Baxter (who had just finished co-starring with Charlton’s Moses on The Ten Commandments) as Lorna Hunter, posing as a Southern lady. Elaine Stritch is very good as the saucy madam Ruby La Salle who is Lorna’s friend and who warns her against the marriage idea. The New York Times reviewer wrote “But in about ten minutes, it is Miss Stritch, the hoydenish blonde warbler who immortalized the "Zip" number in "Pal Joey," who provides what little zip this picture has. Welcome to the prairie, lady. And watch out.” Well put, sir. 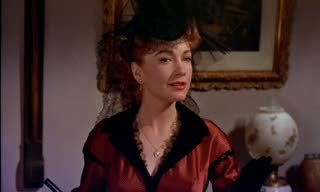 I must say though that for me Ms. Baxter (left) was the best thing about this rather clunky picture. She was always good in Westerns and was the personification of the word feisty, if that isn’t sexist (I hope not, a man can be feisty too, n’est-ce pas?) She does the saloon gal on the make transforming into loving wife and mother with aplomb, in fact much better than the script deserves. The Times again: “Miss Baxter looks lovely, intelligent and uneasy throughout the whole business.” OK. Anne had first been leading lady in a Western in Yellow Sky with Gregory Peck in 1948, and top class she was too, then A Ticket to Tomahawk, The Outcasts of Poker Flat and The Spoilers followed, and she was good in all of them. After that it was just TV shows, more’s the pity, though she did appear in the 1960 version of Cimarron (another soap masquerading as a Western).


Anyway, where were we? Oh yes, Colt has just wed Lorna. He hauls her off in a buckboard back to his rancho. There we discover his one-armed younger brother, Beauregard ‘Cinch’ Saunders (Tom Tryon, Texas John Slaughter for Disney, whom Heston didn’t want cast as his brother but, The Ten Commandments not having come out yet, he didn’t have the clout to say nay) and a bitter sibling rivalry is revealed, rather like MGM’s Saddle the Wind a couple of years later. In fact Colt is so stiff, priggish and unpleasant and Cinch is so warm and human that inevitably, a love triangle looms. 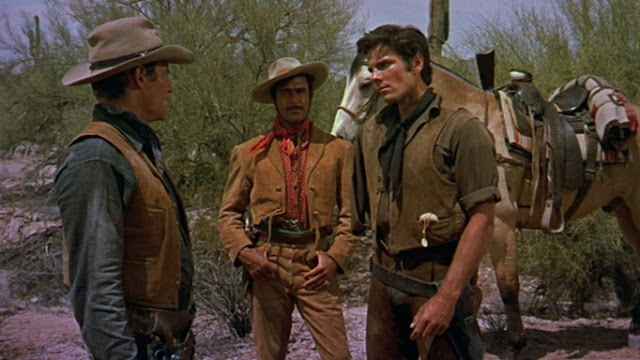 Roland tries to mediate the sibling rivalry
Colt’s conscience is his ranch foreman Innocencio, played by Gilbert Roland, never less than excellent in Westerns. The trouble is, Colt's humorless, cold and unsympathetic nature (Charlton was well cast) means that it’s a tough job.


Of course the wicked carpetbaggers have designs on the Saunders spread. They are Commissioner Bruce Bennett, a former Tarzan who is far too bland to be the truly evil character the plot demanded, and his deputy commissioner (aka henchman) our old friend Forrest Tucker, Wild Bill Hickok to Heston’s Buffalo Bill Cody in Pony Express three years before. Forrest doesn’t have the lines to show his true worth, the James Edward Grant screenplay and Rudolph Maté direction being so stodgy. Still, it’s good to see him. Good old Barton McLane is there too. 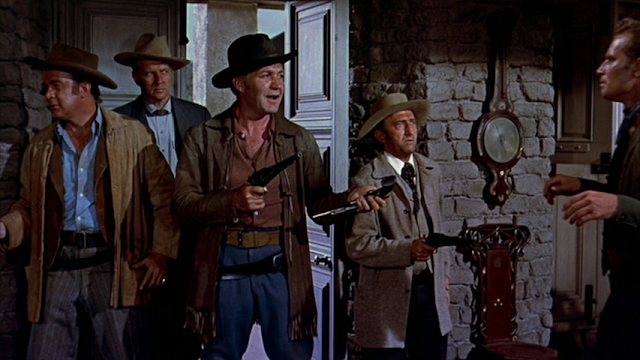 The bad guys
Maté was a talented cinematographer who turned his hand to directing. He helmed seven Westerns (this was the last) but I fear that none of them was very distinguished. Grant was of course one of John Wayne’s preferred writers, and he also turned his hand to directing now and then. But if Three Violent People was typical of their output I regret to say it wasn’t saying much. 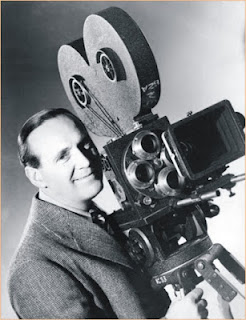 Shoulda stayed behind the camera
Visually, it’s all quite fine. Shot in VistaVision and Technicolor by Loyal Griggs (Osacred for Shane) in pleasant Old Tucson locations (and on the Paramount Western town lot), the picture is a good looker. Pity the direction, acting and writing weren’t better.


The Walter Scharf music is insipid and seems more suited to a gangster noir. 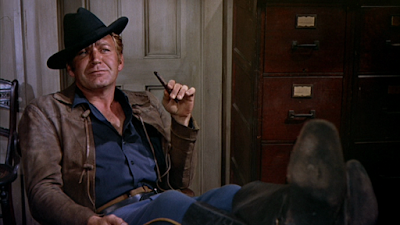 Forrest always entertaining
Like all one-armed characters in these pictures, Tryon so obviously has his arm tucked into his shirt that it’s laughable. The least he could have done was get it amputated for the role. 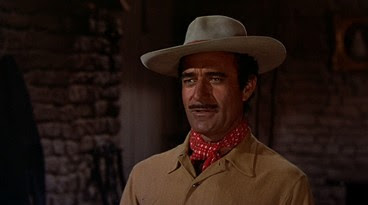 Gilbert too
Only joking.


There’s quite a good ending with an upturned decanter (if you watch it you’ll understand) and a snappy shoot-out.


But all in all I fear this one is a bit of a dud. 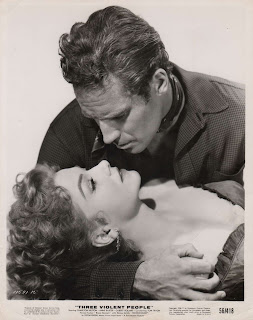