The greatest Western of all time? 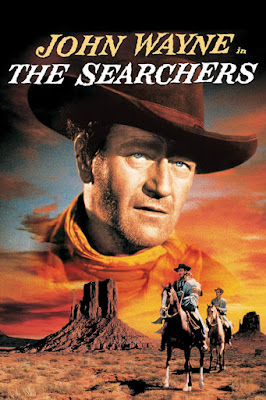 Many regard John Ford's The Searchers as the greatest Western of them all. Western buffs, certainly, will often put this film at the very top of their lists, and sane human beings too rate it very highly. In 1989, it was deemed "culturally, historically, or aesthetically significant" by the Library of Congress. The American Film Institute rates it as the twelfth greatest American film ever made and the best Western. Many opinion polls and surveys put it at the top.


Its influence was huge. Later film makers were moved to imitate or cite it. It is said, for example, that David Lean watched it repeatedly to learn how to shoot landscape, and desert scenes in Lawrence of Arabia illustrate that. Sam Peckinpah, Martin Scorsese, Steven Spielberg, Wim Wenders, Jean-Luc Godard and George Lucas have all spoken about how it influenced them. Buddy Holly used Ethan’s catchphrase That’ll be The Day for a song and a British rock band called themselves The Searchers. Brian Garfield (praise be to him) in his outstanding guide Western Films wrote of it, “The Searchers is undeniably, and wonderfully, a masterpiece.”


Perhaps curiously, although it did well at the box-office, it didn’t win prizes at the time and was ignored by the Academy Awards. Critics, too were lukewarm rather than full of praise. Bosley Crowther, the hugely influential New York Times critic, called it only “the honest achievement of a well-knit team”. Variety said that it was handsomely done in the manner of Shane and "The John Ford directorial stamp is unmistakable. It concentrates on the characters and establishes a definite mood.” But the review added, “It's not sufficient, however, to overcome many of the weaknesses of the story." 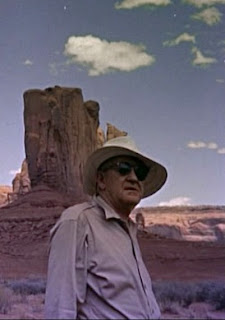 But nowadays The Searchers is regarded as John Ford's masterpiece and John Wayne's too.


From the famous (and very beautiful) opening scene of Monument Valley framed by the doorway of the homesteaders’ cabin to the similar final view, we, on the inside looking out, see Ethan Edwards (Wayne) as the outsider, the man excluded from family and society. And indeed throughout this powerful film, he is exactly that. In his finest performance, Wayne shows us a complex character. He is the true Westerner: he is strong, individualistic and self-sufficient. Yet he is brutally racist, probably criminal (his illegal activities after the war are hinted at), and seeks an almost crazed revenge. He is one of the most savage Western heroes in any film. He is capable of slaying wild animals just so that Indians starve or shooting out the eyes of an Indian corpse so that “his spirit wanders forever between the winds” and he finally scalps his quarry. His aim is not really to recapture the white girls (one has been killed; the other ‘contaminated’) but to get his mad revenge. 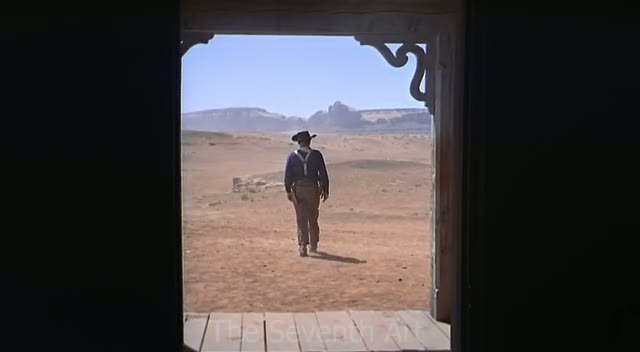 He is actually very like Scar, his Indian enemy (Henry Brandon). When they face off and trade insults they are alike. They speak each other’s languages and have suffered from each other’s brutality. 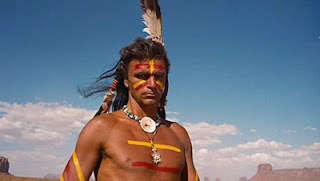 And yet, and yet... Ethan Edwards is also an enormously sympathetic character, full of courage, ability and even nobility. He is implacable yet curiously vulnerable.


There is, too, the theme of repressed sexuality. When Ethan finally comes back three years after the war it is clear that he loved and loves his brother’s wife Martha (Dorothy Jordan). He can't break up the marriage any more than Shane could with Marian. This too keeps him out of the home. Has he even cuckolded his brother in the past and might Debbie (Natalie Wood) even be his own daughter? There are only hints in the film but enough to make you wonder.


Ethan invades the social rituals of which Ford was so fond. He interrupts the wedding and brutally cuts short the funeral (“Put an Amen to it”) so that praying can give way to vengeance. On both occasions he turns “the reverend” (Ward Bond in one of his finest ever roles) back into the Captain of Texas Rangers.


But it is Martin (Jeffrey Hunter), an eighth Cherokee, who is the most civilized of all the men and who kills Scar in legitimate defense of himself and Debbie, not, finally, Ethan, and not for blood revenge. 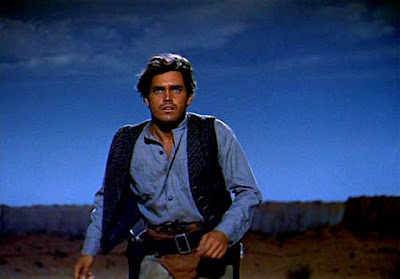 At the end Ethan excludes himself and it is he who is condemned to wander forever between the winds.


The story is thus subtly woven and interesting. The characters are immensely strong. The Frank S Nugent screenplay (his sixth for Ford) from the 1954 Alan Le May novel is powerful, memorable and carries the action along skillfully - no easy feat to telescope years of pursuit into 120 minutes. You can read the Nugent screenplay here. The novel was said to have been inspired by real events: in 1836 the Comanches abducted one Cynthia Ann Parker, who became the mother of Quanah Parker. 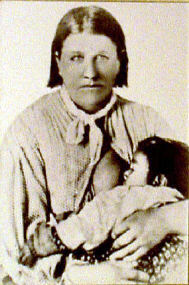 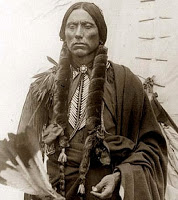 One interesting change that Nugent and Ford made, and a key one for the motion picture, is that Le May’s central character and hero was Martin Pawley, who had no Indian blood. Le May’s Amos Edwards is ‘softer’, much less dark and driven. Ford and Nugent invented the idea of Ethan wanting to kill the ‘defiled’ Debbie, and Le May’s Debbie is Scar’s adopted daughter, not his wife.


Ford was captivated by the novel and very eager to make another Western. After a prolific period of five Westerns in three years, 1948 – 50, he had concentrated on his beloved project of The Quiet Man and a series of less-than-wonderful pictures like Mogambo. But he loved Westerns: “I’ve been longing to do a Western for quite some time,” he wrote to a friend. “It’s good for my health, spirit, and morale.”


It may have been John Wayne’s finest performance. “When I looked up at Duke during rehearsal,” remembered Harry Carey Jr., “it was into the meanest and coldest eyes I have ever seen. I don’t know how he molded that character. Perhaps he’d known someone like Ethan Edwards as a kid. … He was even Ethan at dinner time. He didn’t kid around on The Searchers like he had done on other shows. Ethan was always in his eyes.” We don’t think of Wayne as a method actor but in The Searchers he came close to that. 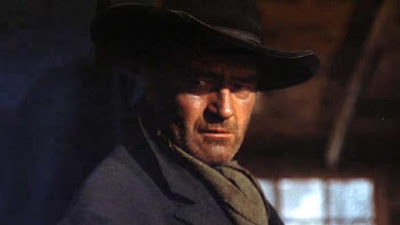 At one point Ford was stung by a scorpion and there was a panic that he might die. Duke checked on him and emerged saying, “John’s fine, it’s the scorpion that died.” A good line. Ford was at his most professional, concentrated, single-minded, subtracting dialogue, doing fifteen to twenty set-ups a day, often single takes, and with an eagle-eye that took in every detail, no matter how small.


Camera movement is limited and there is nothing flashy about the shooting. Ford preferred to put a camera in the right place and leave it there. So when he tracks rapidly in to Ethan’s face, for example, we really notice it. And there we see the face contorted with hatred. It was the obverse of the famous shot which introduced a boyish and optimistic Wayne in Stagecoach back before the war.


Visually, this film is majestic. Its wide screen VitaVision epic grandeur must be seen at the cinema. Even our new big-screen TVs don’t do it justice. Every frame designed by Ford and Winton C Hoch (who had won an Oscar for She Wore a Yellow Ribbon) is flawlessly created and full of subtle imagery. The decision to shoot a West Texas story in Monument Valley was thoroughly vindicated. 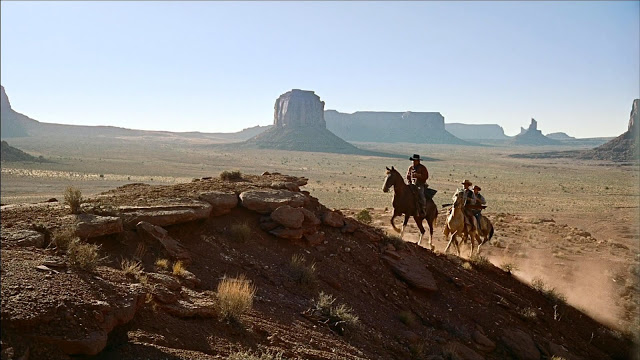 The original music by Max Steiner swirls and rolls around the buttes. IMDb tells us that the melody behind the opening credits is Lorena, written in 1857, a song best known for being favored by Confederate soldiers during the Civil War, while the tune playing as Wayne approaches at the beginning of the film is a slow version of The Bonnie Blue Flag, which, along with ‘Dixie’, was an ‘anthem’ of the Confederacy. These establish Ethan as a Confederate finally coming back from the war.


There are weaknesses to the movie, such as Ford's usual low and rather clumsy comedy interludes, which do detract from the quality of the picture. Ken Curtis’s part is irritatingly gauche and overdone. The fight between the rivals is slapstick. The treatment of Martin’s Indian wife Look is coarse, unfunny and unpleasant. The performances of Vera Miles as Laurie and Natalie Wood as Debbie are pretty banal. Director and critic Lindsay Anderson, in many ways a great admirer of Ford, had a long list of objections to The Searchers and he summed up his views by calling it “a handsome film … self-conscious and unconvincing,” which rather damned it with faint praise. So not everyone thinks the film a masterpiece. 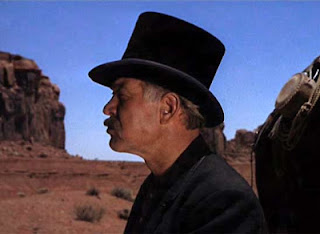 But certainly nowadays most agree that the frailties can’t seriously damage the sustained power and fury that carries the film along. Ford gave us the conflict between wildness and settlement like never before, and this is so often the central theme of the Western movie. Ethan Edwards is a character far more complex than we are used to in Western heroes. The Searchers is a grown-up Western, and it’s a film rather than a movie. You can watch it again and again (I have!) and see something new and wonderful each time. John Ford made some perfectly splendid Westerns, pictures as good as the cavalry trilogy or My Darling Clementine, but he never made one better than The Searchers, and maybe no one else did either.