Not a dud but hardly recognizable as a John Ford Western

The Horse Soldiers was difficult from the start. Producers John Lee Mahin and Martin Rackin also wrote the screenplay and John Ford’s reaction to it was to say, “If you think I’m going to photograph that goddam script, you’re mistaken.” He also told the producer-writers, “You know where we ought to make this picture?”
“No, where?”
“Lourdes, because it’s going to take a miracle to pull it off.”


The actual locations, in Mississippi and Louisiana rather than Lourdes, were unpopular with Ford and in the still-segregated South, African-American members of the cast would not even be allowed to share accommodation with white cast members. Casting was problematic. John Wayne was preoccupied with setting up his mega-project The Alamo and William Holden, fine actor that he was, was a red rag to the bull John Ford. Holden was fond of the bottle and either didn’t know or ignored Ford’s rule about no booze on the set. Altogether it was unhappy project. 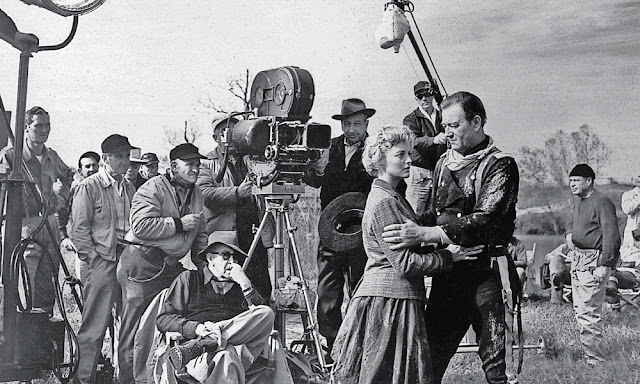 On the set
And whatever feel-good there was on the set was dashed one day when stuntman Fred Kennedy was killed. Kennedy hadn’t worked for some time, after breaking his neck, but Ford kindly hired him for The Horse Soldiers because he needed the pay. It was a relatively simple fall from a horse but it went wrong. Ford was devastated and blamed himself. Scott Eyman, in his fine biography of Ford, says that “there are those who believe that Kennedy’s death drained the last ounce of joy Ford found in the filmmaking process.” 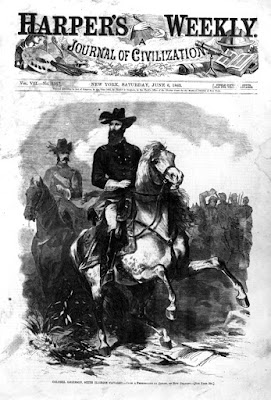 The original
It is a Civil War story, loosely based on Grierson's Raid (1863), the Battle of Newton's Station (1863) and the Battle of New Market (1864). Union troops go behind Confederate lines during the siege of Vicksburg. Colonel Marlowe (Wayne) leads the force and Duke gives us his by now habitual gritty cavalry commander act. He stands for no nonsense and barks at his men, though of course beneath the crusty outer shell beats a heart of Jell-O. Holden is an army surgeon who falls out with the commander. Thanks to Wayne and Holden, the interaction of the commander and doctor is sparky. The film comes across as a sort of anti-buddy movie. They eventually come to mutual respect, of course. 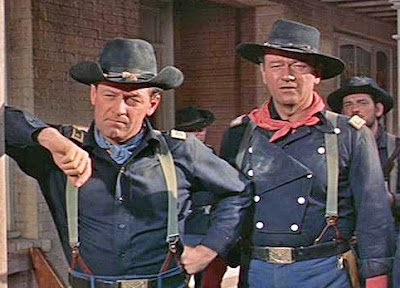 They eventually respect each other
Constance Towers is southern belle Hannah Hunter who comes across as Marie Antoinette but coarse. Offering Wayne chicken and showing her cleavage, she asks, “What was your preference, the leg or the breast?" Quite daring dialogue for the 1950s. Wayne’s character falls for her (difficult to see why) when she is obliged to accompany them on the raid – this is one of the more improbable parts of the story. 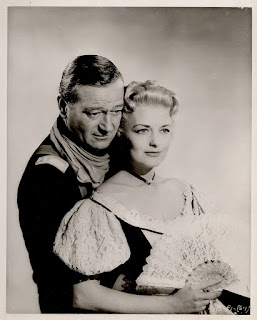 A cheesy still of Wayne and Towers
Various members of the Ford stock company accompany Wayne on his raid, including Hank Worden and Ken Curtis, although Victor McLaglen’s role (he died that year) as comic drunken sergeant-major was taken by Judson Pratt. No Ben Johnson or Harry Carey either, sadly. Denver Pyle and Strother Martin, colorful as ever, get bit parts. Good old Russell Simpson is Acting-Sheriff Goodbody. Veteran screen cowboy Hoot Gibson is a sergeant too, in his last picture. Ford had made silent Westerns with Hoot in the old days and generously gave him the part aged 66. 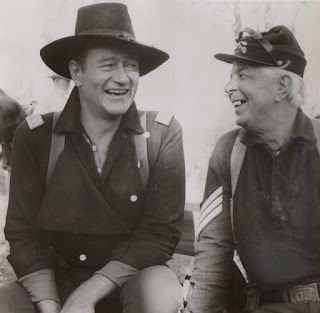 Duke jokes with Hoot
Some of the Ford ingredients are there: pugnacious patriotism, low comedy, cavalry songs, symbolic moments (a white Union soldier dies while a Negro child is born into freedom with the help of the Army doctor), drunken Irish sergeant. In some ways it’s quite formulaic. A reprise. 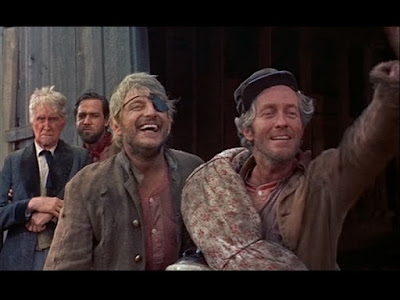 Russell, Denver and Strother
But there is little of the old Ford magic. There is no Monument Valley and there are no Indians. It is extraordinary how different this rather ordinary (and rather old-fashioned for 1959) Western was compared with The Searchers only three years before. Some would say it was sad how far Ford had sunk.


The movie is mealy-mouthed about the slave issue, as most Westerns were. Maybe we had to wait till Django Unchained addressed that. 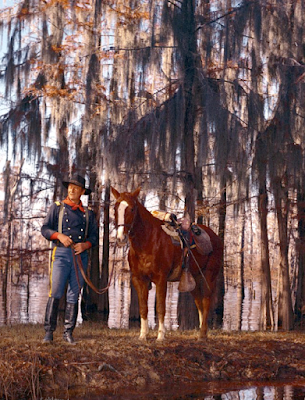 The film is well photographed, as any Ford movie had to be, by William Clothier, who became Ford’s stand-by cameraman and almost assistant director. But Ford himself seemed to have lost interest and it was often Clothier who had the creative input.


The best scene in the picture was not in the rather second-rate script but was improvised by Ford, namely when the boy pupils of a Confederate military academy, led by an elderly parson, march into battle against the Union troops, and a mother (Ford’s old friend Anna Lee) grabs her young drummer-boy son and drags him back home. It was genuinely moving. 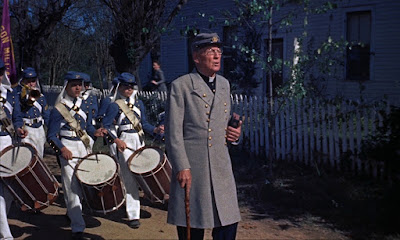 Child soldiers
The Horse Soldiers was not a dud but it was nowhere near the quality of Ford’s previous cavalry Westerns. All of Ford’s late Westerns were weaker than those of the glory days that started with Stagecoach in 1939 and ended with The Searchers in 1956.