Ford at his majestic best.

The so-called ‘cavalry trilogy’ of John Ford was not conceived as such at the outset. Ford and his partner Meriam Cooper wanted to recoup the fortunes of their company Argosy Productions after the disastrous failure of The Fugitive in 1947 and Westerns were a good, bankable way to do that. Fort Apache with John Wayne and Henry Fonda in 1948 was a great start, being a fine film, and a critical and box-office success. After Fort Apache Ford moved straight on the same year with another oater, this time for MGM, a Technicolor remake of a sentimental tale, 3 Godfathers, again with Wayne. But then, immediately, even before 3 Godfathers was released, he returned to the cavalry theme for RKO, yet again with Duke in the lead, and went into production with a picture shot by the highly talented Winton C Hoch, whom he had used on 3 Godfathers, which was given the title She Wore a Yellow Ribbon. 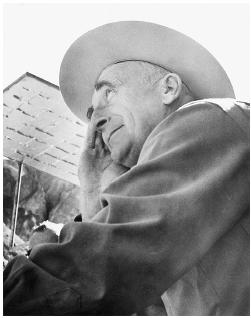 Winton Hoch
The last part of the trilogy, Rio Grande in 1950, would be a return to black & white, so Yellow Ribbon was unique in being a color picture. Although black & white photography could be truly beautiful, and Ford was a master of it, Yellow Ribbon hugely benefits from the color for we get the same splendid scenery we saw in Stagecoach, My Darling Clementine and Fort Apache, but in all its oranges and pinks and ochres, photographed by Hoch - and he won an Oscar for it. In fact Yellow Ribbon was one of only three Westerns (four if you count Hud a Western) ever to win an Academy Award for Cinematography, and it is the color and the setting that give the film its epic quality. 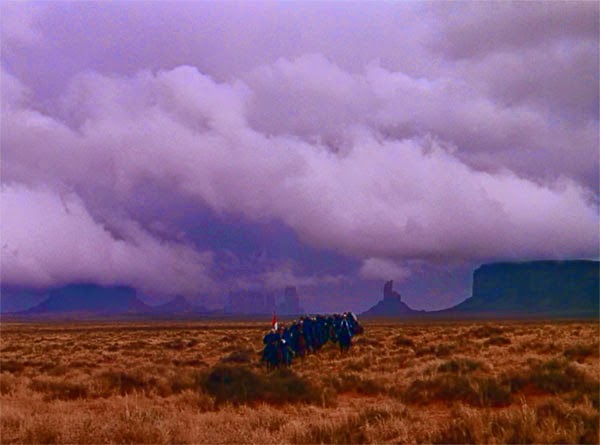 Epic quality
Naturally, that setting was Monument Valley, which contributed so much to so many Ford Westerns. Wayne later wrote, “We lived in a tent city [Wayne was slightly stretching the we there: he and Ford were the only ones to have private cabins] and at night we played cards. … Sometimes the Sons of the Pioneers were there, and they sang too. It was kind of captured companionship and we made the most of it. And most of it was delightful because it was different from the way we lived at home.” This nostalgic view was not, however, the way most of the cast and crew remembered the location shooting; it was pretty basic out there in the valley. 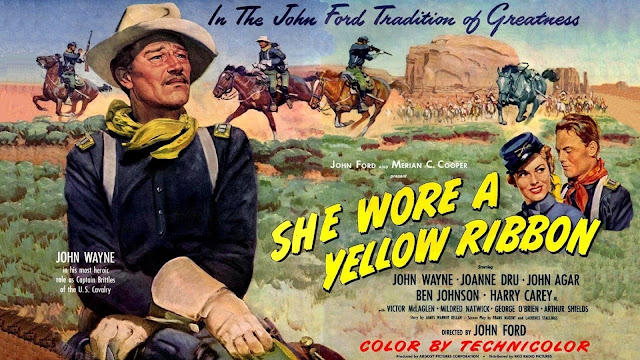 This time John Wayne is crusty Captain Nathan Brittles, in his last week of service before retirement. Wayne’s performance is stunningly good. He is totally convincing as an elderly officer, twenty years older than his real age; the way he walks and looks and talks are just right. The business with the spectacles as he examines the inscription on the farewell watch could have been saccharine but it is in fact very moving. Wayne said that this was his favorite role ever. “I think it’s the best thing I’ve ever done.” What Wayne had, in spades, was an ability to suggest an essential nobility of character beneath rough Western manners. This ability suited the parts he played in Ford’s cavalry Westerns right down to the dusty ground. 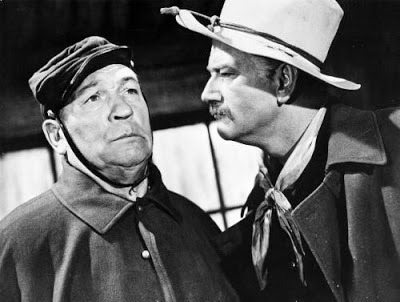 McLaglen back as comic Irish sergeant

The rest of the Ford stock company is there too. Victor McLaglen repeats his act as an Irish sergeant fond of a drop. John Agar returns as the young man who gets the girl (he got Shirley Temple, who was in fact his wife, in the first movie). Lt. Harry Carey Jr., first used by Ford in 3 Godfathers, is Agar's rival. We also have an outstanding Ben Johnson, one of the finest Western actors of them all, splendid as Sergeant Tyree, former Confederate captain. Like Brittles, all he has is a lost past. The director’s brother Francis Ford is the barman. George O’Brien is back, and Paul Fix is there, as a villain. And many of this cast were to reappear in Rio Grande. It is the cast and the setting, more than the tone or theme, which make these pictures a trilogy. 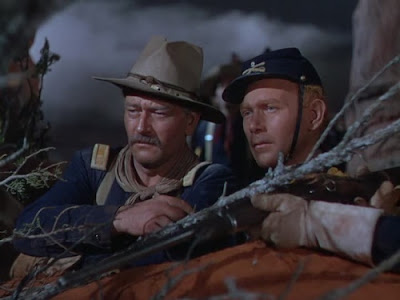 Dobe's second picture for Ford
The female lead this time, though, was Joanne Dru. Ms. Dru had made a stuttering start to her career in the early 1940s but had been chosen by Howard Hawks to play opposite Wayne in Red River (filmed before Fort Apache but released just before Yellow Ribbon). She rather got typecast in Western roles from then on (she was in Ford’s Wagonmaster in 1950, Vengeance Valley in ’51, then many B-Westerns, and in 1960 starred in Guestward Ho! on TV. Painful for a woman who hated horses. But she was good in Yellow Ribbon, and very beautiful. 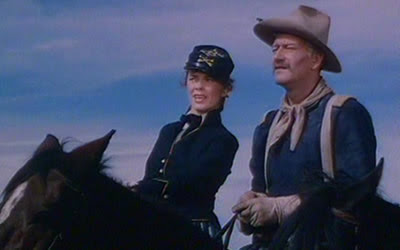 The film is frequently sentimental and nostalgic, and Ford’s penchant for low (and, it must be said, also rather clumsy) humor is probably regrettable too but you can forgive the weaknesses for the undeniable strengths. And the sugariness is counterbalanced by the power and rawness of life on the frontier. It’s a galloping, bugle-blowing, roustabout cavalry picture.


It is 1876. Remote Fort Starke. As he sits beside the grave of his departed wife, Brittles says, “We had sad news today, Mary. George Custer was killed with his entire command. Myles Keogh - you remember Myles?” Now there is a post-Custer rising of the tribes. The Indians have united and are on the warpath. Brittles is given one last assignment by post commander Major Allshard (O'Brien): he must escort an attractive single lady (Dru) and the slightly less attractive and rather hard-bitten commander's wife (Mildred Natwick) out of harm's way. That’s the basic plot. Of course, Indians are a threat, and equally inevitably, two young lieutenants (Agar and Carey) vie for the hand of la Dru, even though it is she who wears the eponymous ribbon, a sign that he has chosen a beloved among the soldiers. She flirts with both but eventually opts for her true love.


There’s a subplot of a sutler (Harry Woods, with Fix as henchman) selling rifles to the Indians. In Western movies that was a crime of such heinousness that it could never be forgiven. Selling your grandmother into slavery was a minor misdemeanor by comparison.

Like the other two cavalry pictures, Yellow Ribbon was based on the writing of James Warner Bellah, and some of the credit for the story and strong characterizations must go to him, but Ford and his screenplay writer Frank S Nugent (as in Fort Apache) did a lot of adding and subtracting – and a lot of softening. Bellah was an overt racist who also had a crude pulp literary style. Nugent and Ford turned Bellah's Saturday Evening Post stories, to which Ford had bought the rights (two, Big Hunt and War Party, were cobbled together to make Yellow Ribbon), into a far subtler, and far more powerful tale. 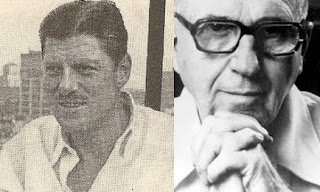 Bellah (left) and Nugent
Ford ‘saw’ the story rather than heard it. He wrote Bellah, “Jim, I think we can make a Remington canvas … broad shoulders … wide hats … narrow hips … yellow strips down the pants leg … war bonnets and eagle feathers trailing in the dust … the brassy sound of bugles in the morning … the long reaches of the prairie … the buttes and mesas in the distance and the buffalo.” (Ford’s punctuation). And indeed Yellow Ribbon is, supremely, a visual Western.

There is a dramatic thunderstorm – Ford insisted on keeping on shooting while the crew cringed from lightning strikes. Bosley Crowther, in The New York Times review, wrote, “No one could make a troop of soldiers riding across the western plains look more exciting and romantic than this great director does. No one could get more emotion out of a thundering cavalry charge or an old soldier's farewell departure from the ranks of his comrades than he.” 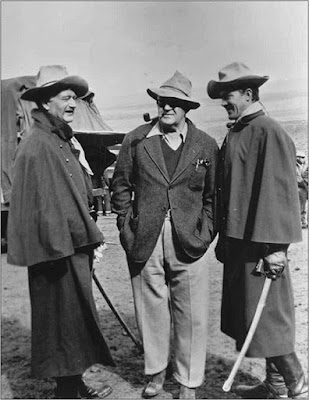 On the set
Ford had so much of the picture mapped out in his head before he even began shooting. He was at this time a supreme professional. In his fine biography of Ford, Scott Eyman wrote of him during production of Yellow Ribbon, “This is not the shambling Ford of the public image, an aw-sucks working stiff, a shit-kicking, directorial version of Will Rogers. This is the ferociously focused artist the world outside of Hollywood never glimpsed.” 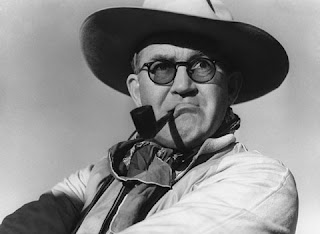 John Ford
But of course sound – dialogue and music – is still very important. There is, naturally, the lusty cavalry singing, chief among the tunes the title song:

In fact, though, Yellow Ribbon is actually quite a dark film, despite all the luminous color. It’s about old men about to lose their only community. Brittles is alone, his family all dead, and he relates to no one unless it be Sergeant Quincannon (McLaglen), but even that only because they share the pain of oncoming retirement and have nowhere to go except “the West”. Brittles is saved at the end by being brought back into the community but you feel it’s only out of pity, and was even rather a weak ending. I don’t think Ford could bear it, having Brittles ride off from Army life to nowhere. 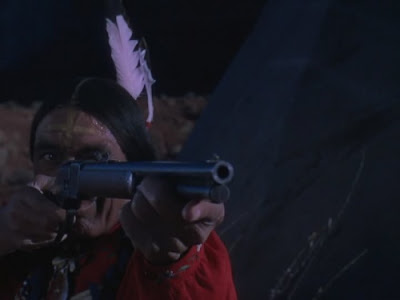 Fort Apache and Rio Grande were classic ‘progressive’ Westerns about the future, making the frontier safe and bringing civilization to the Wild West. She Wore a Yellow Ribbon is about the past, and the future is black and pointless.

But it’s Ford at his majestic best.