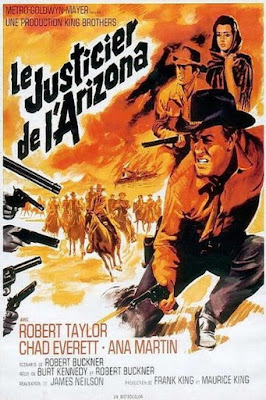 Robert Taylor’s last big-screen Western was a very far cry from his first, nearly thirty years before, Stand Up and Fight, which we reviewed the other day. In Stand Up he had been a handsome young hero who bested the bad guys and won the fair maid. Three years after that he had been young Billy Bonney in the 1941 version of Billy the Kid. Now, in Return of the Gunfighter, he was 56 and looked older. He was obliged to have a father-daughter relationship with the female lead (she calls him Tio Ben, then Padre) and he plays an aging gunfighter, free after five years in Yuma, tired of fighting and even tired of life.


It was a Return in more ways than one because for his last Western Taylor was back at MGM. And in some ways it harked back to some of Taylor’s earlier Westerns, as he played a man in black, a man ‘with a past’, a rather somber figure hinting at inner hurt.


Return was directed by James Neilson, not, I fear, the most outstanding of Western directors. Known mostly as a director of TV shows, he did some feature films with Disney but he only made three big-screen Westerns, Disney production The Adventures of Bullwhip Griffin the same year as Return, and, earlier, he had taken over on Night Passage when Anthony Mann and James Stewart had a bust-up, the result being one of Stewart’s weakest Westerns. 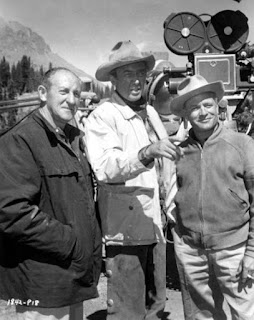 That's Neilson, right, on the set of Night Passage
Still, Return of the Gunfighter isn’t bad. Taylor was good as the grizzled gunman longing to hang up his irons (but there’s always some punk wanting to take him on) and his by now craggy face somehow suited the part. And it was co-written by Burt Kennedy so that was a definite plus. It benefits from Lyle Bettger as the smoothie/tough bad guy, and Michael Pate as a gun-thug, though neither was any longer in his first flush of youth. In a way it reminds me of an Audie Murphy Western, or, if it had been a decade earlier, a Budd Boetticher/Randolph Scott one. That's not a bad thing!


There had to be a handsome young co-star, who could pair off with the girl (Taylor being too old for that) and they cast Chad Everett, not an actor I knew well but he had been a deputy in ABC’s short-lived The Dakotas in 1962 and had played with Taylor in the non-Western Johnny Tiger the year before Return. He’s OK, I guess. 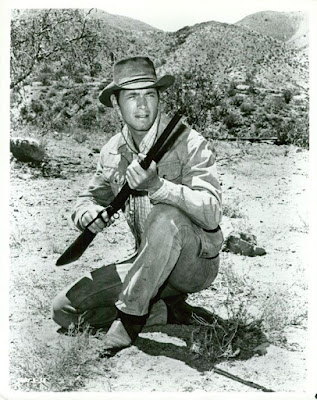 Everett gets the girl
It opens with garish spaghetti-influenced titles and jangly music (interesting to see the reverse-engineering process going on as Italian Westerns started influencing proper ones). We see Buck Wyatt (Taylor) in a saloon, playing cards in a crooked game, with his opponents' accomplice signaling what cards Wyatt has, just as had happened in his first Western  -was it perhaps a deliberate reference? What was certainly a deliberate reference is Taylor's character's name; he had been Buck Wyatt in the great Westward the Women in 1951. 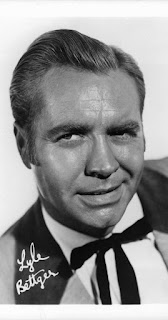 Rich rancher villain Bettger
After he is obliged to shoot the crooked gambler, an uncredited young Mexican gunfighter arrives (classic spaghetti close-up of his eyes over the batwing doors) to ask Wyatt’s help for his cousins, the Domingos, a New Mexico family about to be illegally evicted from their home. Wyatt and Luis Domingo (Rodolfo Hoyos Jr.) had fought together for Juarez back in the day. Sadly, this young Mexican is then written out; dramatically, he should have helped in the fight. Anyway, Wyatt rides off to the farm near Lordsburg but finds only two graves. He is too late. Evil Clay Sutton (Bettger) and his henchmen Butch Cassidy (John Crawford) and Sundance (John Davis Chandler) have murdered them. But their daughter, the fair Anisa (Ana Martín, in a 60s bouffant hairdo) has escaped. 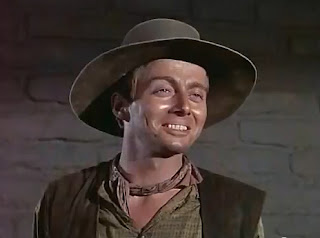 Chandler is psychotic killer
Blond Chandler specialized in playing psychotic villains like Sundance and you may remember his evil bounty hunter in The Outlaw Josey Wales, his Norris in Pat Garrett & Billy the Kid or his Jimmy Hammond in Ride the High Country. Here he is an evil thug who takes pleasure in killing, and is rather the boss of Butch. As it’s 1878 and he is killed in a quick-draw showdown by Wyatt, it does rather play fast and loose with history but that’s Hollywood Westerns for you. Butch and Sundance have featured in many Westerns, set in all sorts of periods, and have met many deaths.


There’s a crooked marshal in Lordsburg (Mort Mills) who is in rancher Sutton’s pocket. He is also blond. In fact all the villains are Nazi-blond and contrast with hero Taylor’s dark mien and the good-guy Mexicans. 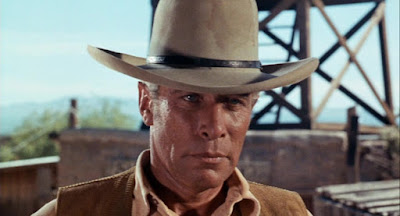 Crooked lawman in rancher's pay
There’s a sub-plot of three Boone brothers who are gunning for Lee Sutton (Everett) because he shot a fourth, over a girl. They are Boyd ‘Red’ Morgan, Henry Mills and Michael Pate, but they are soon dispatched by Wyatt and Lee working in tandem, and again, dramatically, one wonders even what they were doing in the plot. Australian Pate usually played Indian chiefs but occasionally he moonlighted as a gunfighter, as, for example, in A Lawless Street where he was gunning for Marshal Randolph Scott. 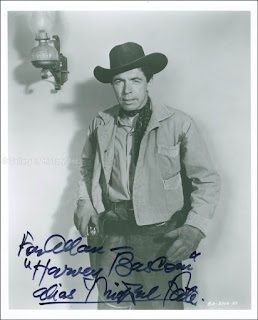 Pate not always an Indian
It was set in New Mexico but shot in Arizona, around Old Tucson, and in fact Lordsburg looks really nice, a convincing New Mexico town. We also see the stage to Lordsburg rolling along a couple of times. 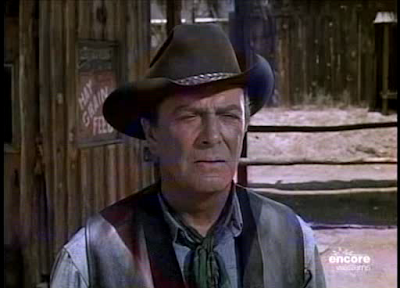 Taylor rides again but for the last time
The final shoot-out is quite well done, after which young Lee gets the girl and Wyatt walks off sadly, alone. It was the last time Robert Taylor did so. He would appear on the small screen, in two episodes of Hondo later the same year which were then cobbled together to form a TV movie, Hondo and the Apaches, and of course for the last three years of his life (he died from lung cancer aged only 57) as host of Death Valley Days, also appearing in a couple of episodes. But Return of the Gunfighter was his big-screen Western swansong. I always liked Taylor as Western lead, and Return of the Gunfighter, though pretty well a B-Western of no huge merit, was by no means his worst. The late 60s ‘end-of-the-West’ tone suited his older self and an aging dinosaur gunfighter was a suitable role for him.