A Texas Cowboy by Charles A Siringo


Low on credibility but a lot of fun 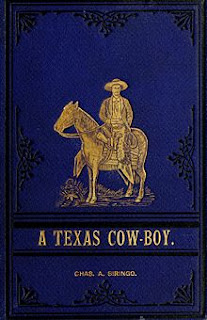 Charlie Siringo was a colorful character of the old West. I mentioned him recently when reviewing the movie Siringo (a picture which, by the way, has nothing to do with the real Charlie). Best known as a Pinkerton detective, he also wrote a memoir of his youth as a cowpoke, A Texas Cowboy, or, Fifteen Years on the Hurricane Deck of a Spanish Pony, first published in 1885 when Charlie was only 30. Later we’ll be reviewing other books by or about Siringo but today let’s have a look at his years as a cowboy.


Siringo was a great self-publicist. He states his object in writing the book bluntly in the very first line:


My excuse for writing this book is money – and lots of it.


History does not record if his ambition was realized and the cash came flooding in from royalties. I doubt it, somehow.


Siringo had a very meager grasp of the rules of English grammar, punctuation and spelling, and no editor seems to have been engaged, so the read will make any passing English teacher blanch. But in fact I found it rather endearing, and the prose underlines the youth and naivety of the author. In fact his last paragraph raises a smile:


Now, dear reader in bidding you adieu, will say: should you not be pleased with the substance of this book, I’ve got nothing to say in defence, as I gave you the best I had in my little shop, but before you criticise it from a literary standpoint, bear in mind that the writer had fits until he was ten years of age, and hasn’t fully recovered from the effects.


It also smacks of tall tales, and Siringo is free with mentions of personages of the West whom he claims (though often without details or corroboration) to have met. This is especially true of Billy the Kid, to whom he devotes chapters – and in fact he later expanded this part of the memoir into a full book on the famous outlaw. But ‘historical facts’ are given without any evidence or citations and you are left with a definite impression that his whole account is based on hearsay. He does state at one point that one of his sources was Bonney himself, but as he never recounts in the text their meeting (which he certainly would have done had it been real) the readers remains skeptical. 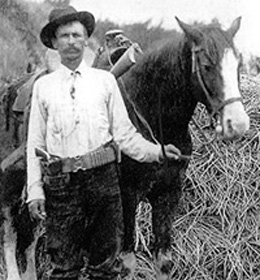 Charlie in his detective days
Siringo starts, logically enough, with his boyhood days. He gives his birth date as 1856, whereas it appears in reality to have been 1855. He was born “at the extreme southern part of the Lone Star State, on the Peninsula of Matagorda”. His father died when he was only a year old and evidently his mother had trouble bringing him up. He was by his own account a very naughty boy. As a young lad he found the fighting of the Civil War in the area exciting.


“About a year after the war broke out the rebels gathered up all the cattle on the Peninsula and drove them to the mainland, where they were turned loose with thousands upon thousands of wild cattle already over there.” When the war ended “all of the men and boys who were large enough” went to recover the cattle but it appears that Charlie was not large enough (he was nine or ten) for he was not allowed to go. But later a certain Mr. Faldien, a cattleman, rented part of the family home and persuaded Mrs. Siringo to let Charlie go with him to Matagorda “to learn to run cattle”. A mere child, Charlie was now a cowboy. 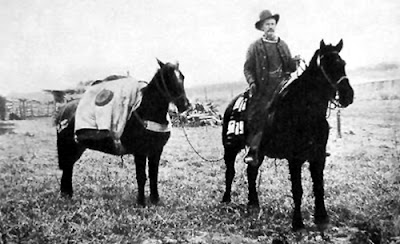 He covered thousands of miles
His adventures as a cowpuncher – and, to hear him tell it, soon to be a trail boss – took Charlie all over the South and South-west.


One of the ranches he worked for was owned by ‘Shanghai’ Pierce and his brother Jonathan who had “come out there from Yankeedom a few years before poorer than skimmed milk”. They sold out “for the snug little sum of one hundred and ten thousand dollars.” Charlie adds, “That shows what could be done in those days, with no capital but lots of cheek and a branding iron.”


Siringo often shows evidence of a then-common but today unpalatable attitude to those he calls “colored” or “negroes”. Sometimes he mocks the language they used and paints a ‘comic’ picture of such folk. At others he is guilty of a casual brutality. When a ranch manager leaves Siringo says, “Some of the boys hated to part with Mr. Nie but I was glad of the change, for he wouldn’t allow me to rope large steers nor fight when I got on the war-path. I remember one time he gave me fits for laying a negro out with a four-year old club.”


Often Siringo worked for apparently good wages only to have so many deductions made for board that the entire pay disappeared. It was certainly not an easy life and young boys were clearly exploited by unscrupulous bosses. Charlie started to brand “Mavricks”, as he calls them, on his own account, building up a small herd “which began to make me feel like a little cattle king”. But he adds, “The only trouble was that they were scattered over too much wild territory and mixed up with so many other cattle. When a fellow branded a Mavrick it was a question whether he would ever see or realize a nickel for it.” But he was working “on my own hook”, branding mavericks and also skinning dead cattle. “To give you an idea how badly cattle died that winter will state that, at times, right after a sleet, a man could walk on dead animals for miles without stepping on the ground.”


“That spring,” says Charlie, without naming the year, “there was a law passed prohibiting the carrying of pistols and I was the first man to break the law, for which they socked a heavier fine to me than I was able to pay.”


Of course like all cowboys of the time Charlie tells of wild goings-on in the trail towns. Chapter XIV, for example, is entitled “On a Tare [sic] in Wichita, Kansas”. He says that in Dodge City while “whooping ‘em up” he ran into “an old friend by the name of Wess Adams and we both had a gay time, until towards morning when he got severely stabbed in a free-for-all fight.” He also often brags of the girls he wooed. In Indian Territory he tells of a big horse race after which “the whole mob were gloriously drunk, your humble servant included. There were several fights and fusses took place.” Charlie says, “It being against the laws of the United States to sell, or have whiskey in the Indian territory, you might wonder where it came from: a man by the name of Bill Anderson – said to have been one of Quantrell’s men during the war – did the selling.” As Bloody Bill was killed in an ambush on October 26, 1864 it was unlikely that he was selling liquor in Indian Territory in the 1870s, but that’s Charlie for you.


But just as often he describes the loneliness of the cowboy life as he was sent on long missions to round up strays, for example. Chapter XV’s heading is “A Lonely Trip Down the Cimeron [sic]”. On these journeys he shows signs of being either singularly accident-prone or very improvident, being without matches to light a camp fire, for example.


According to Siringo’s account, rancher Moore was disappointed by the cowardliness of Frank Stuart, who had been hired by the Panhandle cattlemen to put a stop to the rustling of their cattle by Billy the Kid, among others, who were running them over to the Fort Stanton area, and so Moore put Siringo in charge of a party to do the job properly. This group included Big-Foot Wallace, the celebrated Mexican war soldier and Texas Ranger. This seems a very tall tale.


“From Roswell we went to John Chisholm’s ranch [he must mean John Chisum] on the head of South Spring River; and got there just in time as he was rigging up his outfit for spring work. They were going to start down the Reo Pecos to the Texas line, next day, to begin work and I concluded we had better work with them, in search of Panhandle cattle which might have drifted across the Plains.” Of course Charlie would have to work with John Chisum. He also ran into Ash Upson, the bibulous journalist friend of Pat Garrett.


The story comes to an abrupt end when on the very last page Siringo gives up cowpunching to run a store. He doesn’t really say why beyond the fact that he “fell head over heels in love with a pretty little fifteen-year-old black-eyed miss, whom I accidently met.”


If you read this short book you’ll probably enjoy it. A certain infectious youthful enthusiasm shines through it and you do get interesting detail on cowboying in the 1870s and 80s. But you would be wise to take it with a large pinch of salt.