Amusing, very skillfully directed, artfully photographed and with a strong cast, Westward the Women is a fine movie. 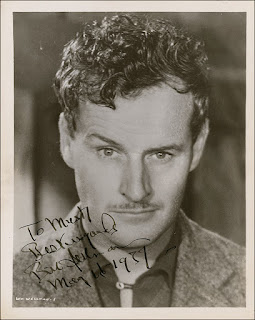 William A Wellman (left in 1937) was in many ways the director John Ford wanted to be. A dashing air ace of World War I, a bully on the set who held actors in contempt, a man who made Hollywood movies into art, he was Ford’s kind of guy. Wellman had pretty well started in Westerns, appearing with his mentor Douglas Fairbanks in The Knickerbocker Buckaroo in 1919 and later directing Dustin Farnum and Buck Jones silent movies for Sam Goldwyn. He worked (with others) on the Wallace Beery Viva Villa! in 1934, made a version of Call of the Wild with Clark Gable in ’35, and had fun with Warner Baxter as Robin Hood of El Dorado in ’36. The 1940s saw Wellman direct some fine Westerns, especially The Ox-Bow Incident in 1943 with Henry Fonda. His Buffalo Bill with Joel McCrea in 1944 was not perhaps the greatest of portrayals but Yellow Sky with Gregory Peck in 1948 was a taut noir with real quality. In the 1950s, earlier the same year as Westward the Women would come Across the Wide Missouri, again with Clark Gable (Wellman blamed studio cuts for the lack of success of the picture), and in 1954 Wellman directed the superb Track of the Cat, with Robert Mitchum. It was a pretty damn good Western CV. 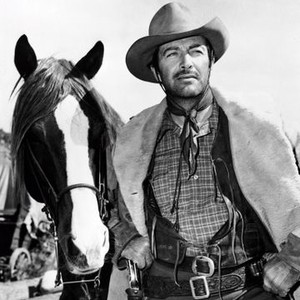 Robert Taylor (right) was more usually thought of as a romantic lead but he loved Westerns, had been Billy the Kid for King Vidor in 1941 and his career coincided with the high-water mark of the genre in the late 1940s and 1950s. The year before Westward he had starred in two outstandingly good Westerns, the gripping Sam Wood-directed Ambush, released in January, and the fine Devil’s Doorway, directed by Anthony Mann, in September. In Westward the Women he plays ruthless, rude, unshaven wagon-train boss Buck Wyatt (a classic Western hero name, which Taylor was to re-use in his last Western, Return of the Gunfighter) who, though highly skeptical of the scheme, accompanies his friend Roy Whitman (a superb John McIntire) from Whitman’s valley in California to Chicago to recruit wives for the valley’s exclusively male settlers. Whitman is determined and visionary but Buck is very doubtful. He says, “Two things in this world scare me. And a good woman is both.” 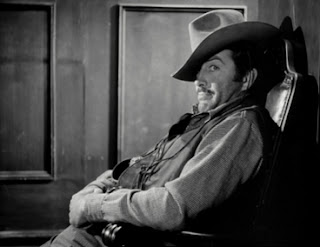 More than a little skeptical
The idea was that of Frank Capra and it would have been interesting to see what he himself would have made of it as director (especially as he intended to cast Gary Cooper in the lead) but in the event Columbia wouldn’t play and he sold the project to Wellman, who would make a superb job of it. The genius director of It’s a Wonderful Life tragically never made a Western. 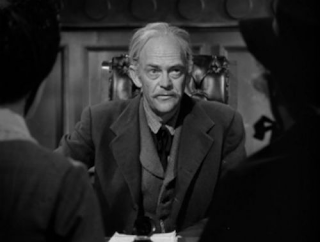 John McIntire (left), who had also been in Ambush, raised any Western he was in – not that this one needed much raising as it was already top drawer stuff. That crusty grit and rugged face ideally suited the noble genre and in Western after Western he took really memorable parts, so much so that he sometimes stole the show. Think of his sinister gambler/arms salesman in Winchester ’73, his villainous judge in The Far Country or his patriarchal doctor in The Tin Star. And he himself would eventually take over from Ward Bond bossing his own Wagon Train from 1961 onwards, so Westward must have been good practice. 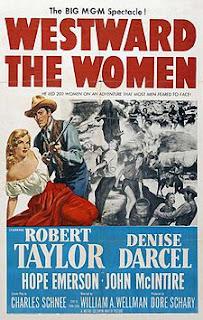 Of course wagon train stories were far from new; indeed they were a staple of the genre, and there are scenes in Westward the Women that are very reminiscent of The Covered Wagon (1923), The Big Trail (1930), Wagonmaster (1950) and countless others. The wagons toil their laborious way across from Independence, Missouri, facing hostile terrain, illness, accidents, desertions, attacks by Indians, romances, births and deaths, thirst, and all the rest, punctuated by the occasional dance. Nevertheless, Wellman manages to make it all fresh. He pulls off quite a trick in that regard.


It’s quite a feminist movie for the early 50s in the sense that most of the protagonists are women, strong women, and they do everything the men can do and sometimes better. True, the instigator and leader of the train are dominant men but these men come gradually to appreciate and admire the women’s grit. The film is a sort of hymn to the virtues of frontier women, their heroism and endurance, their courage and their desire for freedom. 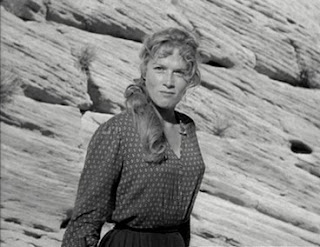 Fifi Danon, the French lady of uncertain virtue whom Whitman, in a scene of great subtlety, allows on the trip as a redemptive move for her, and who falls for Buck, gets the most attention, played by second-billed Denise Darcel (left), who would later star as the countess in the tawdry pot-boiler/farrago Vera Cruz. Ms. Darcel often appeared more of a buxom foreign siren in the Hollywood tradition but here she is vivacious and sparkling and she manages well the transformation from detestation of Buck to love. Of course young John Wayne had fallen for glam French Marguerite while on The Big Trail and sultry blondes were necessary equipment on all Hollywood wagon trains. 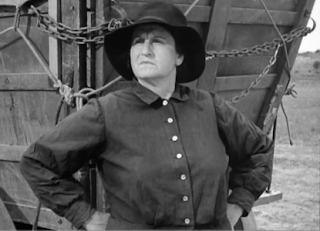 But the other women moving westward are superb. Hope Emerson (right) in particular has a glorious part as the imposing Patience Hawley from Massachusetts with her nautical lingo. She becomes pretty well the matriarch of the train. Then Julie Bishop as Fifi’s friend Laurie is brilliant as the ultimately tragic figure who falls for one of the cowboys (Pat Conway in his film debut). Renata Vanni is also very fine as the Italian mother who loses her young son in an accident and blames herself, suffers a temporary madness but eventually emerges as a woman of strength and integrity. Lenore Lonergan is Maggie, the woman who can ride, skin mules and shoot as well if not better than any man. Rose (Beverly Dennis) is pregnant and gives birth along the trail; she will find happiness with a young settler in the valley who will be a father to the baby and a loving husband to Rose. In fact the final scenes of the arrival and matchmaking are tender and moving, as well as sober and dignified.


The scene where Taylor smiles ruefully at the women with a mixture of pride, happiness and huge respect is truly memorable. It needed no words.


Wellman and his DP William Mellor often adopt low camera angles to show the women as grander figures, standing on a crest, for example. It adds to their stature, physical and moral. 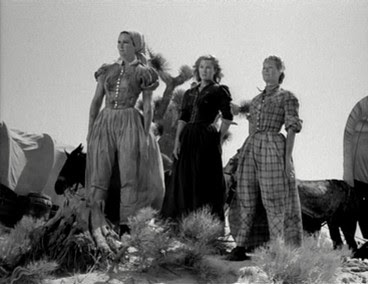 We look up to the women
Henry Nakamura as Ito is the diminutive Japanese-American who is, finally, the only male survivor of the trek apart from Buck, and he is outstanding. The part could so easily have been overplayed as comic relief but Wellman and Nakamura crafted a touching performance as Ito becomes the conscience of Buck and softens him, making him more human and forgiving. It was quite soon after World War II to be portraying Japanese-Americans in such a sympathetic way, and full credit to Wellman for that. 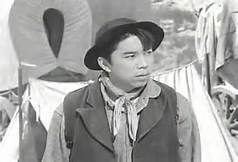 No mere comic relief
There is, though, a fair bit of humor, but far more subtle than Ford’s broad attempts, not only with Ito. My favorite part is when the Indians attack, the Italian mamma shoves the head of her young son down below the wagon, then the boy’s little dog pops up and is in his turn shoved down by the boy. It’s a delightfully funny moment. When the boy dies, the dog wants to remain lying on the lad’s grave. It is Ito who returns to the tomb to recover the mutt and then adopts it. It is a moment of pathos and power.
There are other parts which could have been mawkish or sentimental but which are instead moving and memorable, such as the moment when the wagon carrying the girl giving birth loses a wheel and the women together lift it level again until the baby is born. 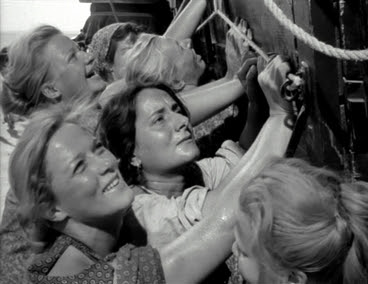 They raise the wagon


The frequent lack of music and the simplicity and lack of glamor in the sets and costumes give almost a documentary feel to the picture and add to its realism and grittiness.


What should have been the climactic and long-threatened Indian attack is handled in a masterly way: by not showing it. In the story Taylor is away pursuing runaway Darcel and they return to find the aftermath of the attack – dead women, burning wagons and McIntire mortally wounded. Rarely can non-action have been so powerfully used. 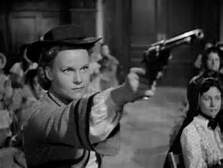 She shoots out the eye of the sheriff in an election poster and you wonder why
There’s quite a lot of untranslated Italian and French from the women concerned. I speak both and I can tell you that the Hays Office evidently didn’t because they say things that would never have got by the office in English…


William Mellor photographed the movie in luminous black & white in Kanab, Utah and Death Valley, California locations in the summer of ‘51, and there are some stunning shots. He did not aim for the picturesque, as such, in the way that, say, John Ford and his cameramen did, but for scenery that highlighted the aridity and harshness of the terrain traversed. It is said that the two hundred women engaged for eleven weeks to make the movie had almost as hard a time of it on location as the people they were playing would have had going west. MGM produced a short, Challenge the Wilderness, about the making of the film. 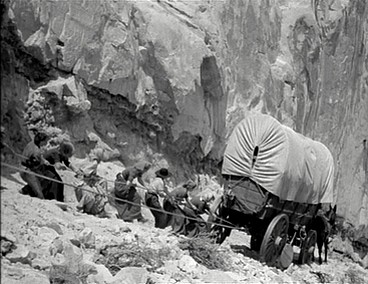 Hostile terrain
It’s set in 1851 though the firearms are modern (Buck has a Peacemaker). That was normal for Westerns at the time.


The movie was budgeted at $2.2m and grossed $8m so MGM must have been pleased. Though it’s one of the very few of the studio’s movies in which Leo the Lion does not roar at the start. 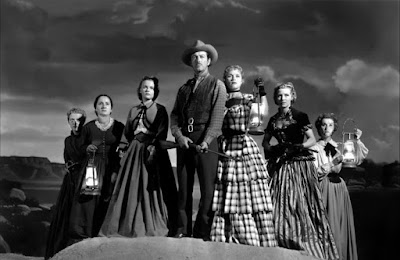 Admirable
Really the early 50s were an astonishingly good time for the Western. When you think that in 1950 and ’51 alone Wellman, Ford, Henry King, Jacques Tourneur, Henry Hathaway, Delmer Daves and Anthony Mann all directed Westerns of real and lasting quality, you envy those times. These days a really good Western comes out once a decade.


Westward the Women is a must-see for all lovers of the Western. 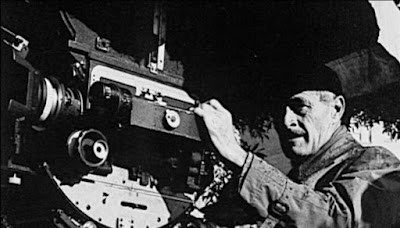 One of the greats