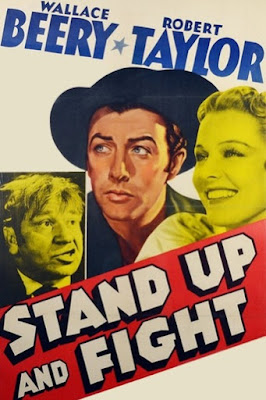 Robert Taylor’s first Western movie is generally thought to be Billy the Kid in 1941 but there is an earlier claimant to that title, a film of three years before which merits that status, Stand Up and Fight.


True, it starts unpromisingly (i.e. in an unWestern way) with a foxhunt by posh people in Maryland, 1844. But very soon it becomes a straight oater with Taylor in range duds, with sixguns, horses, and a plot about the rivalry between a stage line and the railroad.


Young and dashing Taylor, five years into his contract with MGM and with hits such as Magnificent Obsession and A Yank at Oxford already behind him, got second billing to that great ham Wallace Beery. Hard-drinking, larger than life Beery, Noah’s brother, had done silent Westerns, including James Cruze’s follow-up to The Covered Wagon, the 1925 version of The Pony Express, but had gone to MGM at the start of talkies (he was Pat Garrett in the King Vidor-directed 1930 version of Billy the Kid) and scored big hits and a best-actor Oscar in the 30s. Probably his biggest successes were as Long John Silver and Pancho Villa, both in 1934. In Stand Up he plays the morally and legally dubious manager of a stage line fighting off competition from the railroad. 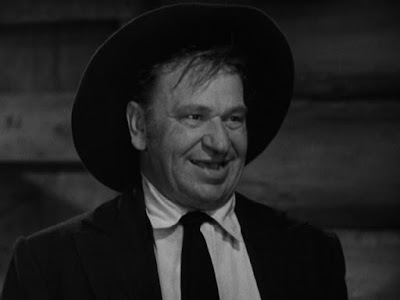 Hamming it up
There is an unpleasant sub-plot about slavery. Taylor is Blake Cantrell, a Maryland aristo obliged to sell his estate because of debts. He includes his slaves in the auction rather than freeing them, weakly arguing that like his horses they will be better looked after that way. By insisting that the slave family be not broken up he is shown as noble. Later we discover that Captain ‘Boss’ Starkey (Beery) is using his stage line’s wagons to run slaves at the behest of the sinister Arnold (Charles Bickford), later to be revealed as the even more sinister slaver Morgan. Arnold/Morgan is perfectly ready to murder slaves he can’t sell. When Cantrell, now obliged to work, arrives, he discovers that one of the slaves is none other than his own Enoch (Clinton Rosemond), whom he had sold. 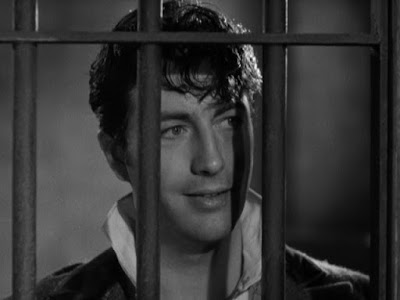 Taylor as 1930s MGM star
The train is great, a replica of a really early one. It can barely make gradients and it is beaten by the stagecoach in a race – a classic scene in many a Western. Jonathan Hale is the railroad boss Colonel Webb. He offers Cantrell a job as a detective but Cantrell turns it down (at first) as beneath him. 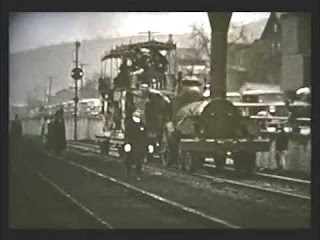 I'm afraid it's not a very good picture but it's a great train
There is love interest, of course. Cantrell falls for glam Susan Griffith (Florence Rice, often Robert Young’s co-star), though he is slightly less taken with Susan’s severe guardian, Aunt Amanda (Helen Broderick). Susan is at first rather dismissive (he is a ruined aristo after all) but it turns out that she and her aunt are owners of the stage line, and Cantrell is obliged to work for the line for three months when Capt. Starkey pays his fine after a fight over a crooked card game in the saloon. Gradually true love blossoms, as we know from the get-go it will, Aunt Amanda notwithstanding. 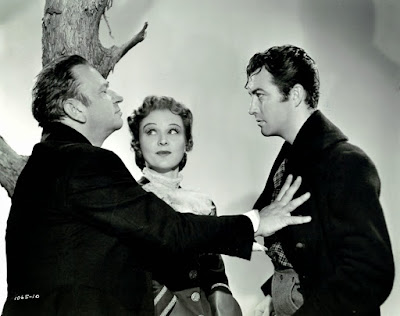 Predictable romance
There are two fistfights between Capt. Starkey and Cantrell, with differing outcomes. Arnold/Morgan gets the better of Cantrell by using a derringer (typically sneaky). Barton MacLane is the slave runner’s henchman. There’s another stage/train race, also with a different result. And there’s rather a weak happy ending; the story would have been better served with Capt. Starkey dead or behind bars. 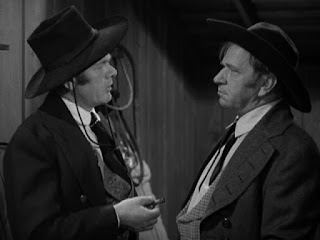 Bickford excellently villainous
The movie was helmed by WS Van Dyke, one of Louis B Mayer’s favorite directors, who had made quite a lot of silent Westerns. Madge Evans said of him, “A lot of people found Woody Van Dyke difficult, but I didn't. I liked him very much, and I liked making films with him because he had been a cutter and his great position at the studio came about because he brought in his pictures so fast. He never took ten shots of anything. He never let a scene run over, because he could cut with the camera.” Certainly Stand Up and Fight is well paced and it rattles along. 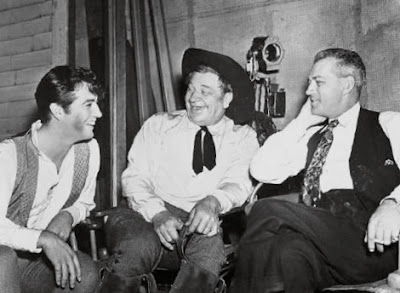 Taylor and Beery on the set with director Van Dyke
No one’s going to pretend that Stand Up and Fight is a great Western, or a great film at all. But all in all it’s in fact quite a lot of fun. I enjoyed it.