Not the real Charlie Siringo 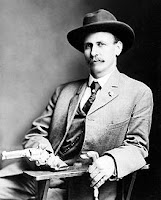 The career of Charlie Siringo (left, c. 1890) is a very interesting one for Westernistas, and we shall examine it more closely another day. Charles A Siringo (1855 – 1928) was a cowboy and later Pinkerton detective. He knew personally many of the great figures of the West, such as Wyatt Earp, Pat Garrett and Tom Horn, and took part in key operations against Butch Cassidy’s Wild Bunch. He wrote a popular book about his life as a young cowboy, and an autobiography which told of his detective work. In 2005 a biography of Siringo by Howard R Lamar was published. So there’s no shortage of material for those interested. As I say, when I get round to reading those I’ll post something more on Charlie. 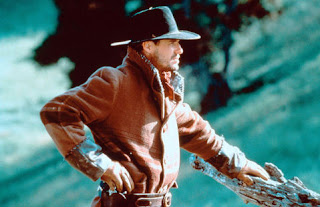 Meanwhile, though, popular culture has been rather taken with him. In Larry McMurtry's novel Streets of Laredo, Call reads Siringo's first book and tells Charles Goodnight that it's mostly yarns. Played by Dennis Farina, Siringo made an appearance in Bonanza: Under Attack in 1995. LQ Jones, Steve Railsback, William Berger and Steve Forrest have all played Charlie on TV. Siringo even made an unlikely appearance in the Elvis Western Love Me Tender in 1956, played by portly Robert Middleton. These Siringos, especially, the last, were pretty far from the historical one, but that’s Westerns for you. It’s the name more than anything which seems to have captured the imagination. And in 1994 Brad Johnson (above right) starred as Siringo in the TV movie of the same name: Brad’s Siringo wasn’t Italian (the name is of Piedmontese origin) but was supposed to be an Apache one. This Siringo is a tough deputy with a Kiowa grandma. Whatever.


The movie is very ordinary, I fear, though I suppose no worse than many a B-Western of yore. It is family-friendly (dread phrase) and politically correct, and you could watch it with your children, though they’d probably be bored. The characters all have modern teeth, hair and diction and are clearly wearing costumes. Nothing looks real. It all has the, er, hallmark of blandness. 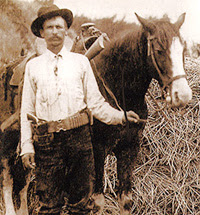 Another photo of Charlie
The big plus it has is that Barry Corbin is the marshal. Then in his mid-fifties, Mr. Corbin had, ahem, gained a little avoirdupois but never mind (and anyway, who am I to talk?) It’s always good to see him. William Sanderson has a small part too so if you want to see EB Farnum before he got to Deadwood, this is your chance. 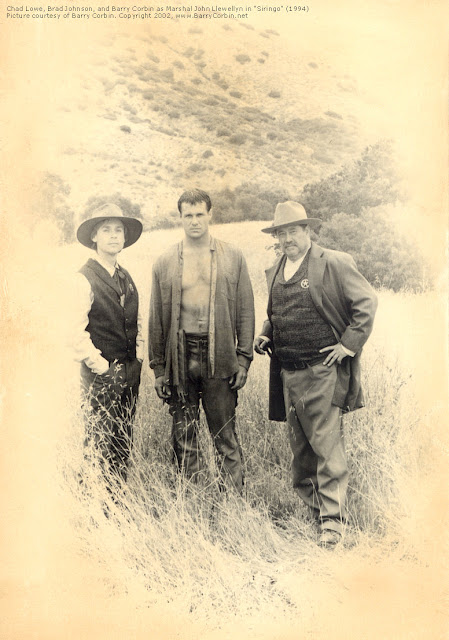 There's Barry, on the right
Talking of modern hair, above, that is in fact one of the funniest parts. Though made in the mid-90s some characters have hilariously 1980s hair, enough to put Dynasty in the shade.


Mr. Johnson is OK, I guess. Born on a ranch near Tucson, ex-rodeo man, a three-year run as the Marlboro Man, now living on a ranch in Colorado, he has the CV. He was Col. Tom Soult in Comanche Moon and Beau Dorn in Crossfire Trail (with Corbin and Sanderson again). As Siringo he has to track down an evil bad guy, but is encumbered by a gabby deputy (Chad Lowe). “Don’t have time to be training that boy,” he says.


You could watch it, at a push. Better than going to the dentist.
But I think you’d be better off reading about the real Charlie Siringo.