Right after the Second World War we got the Ur-Trigger story. Republic showed us how the smartest horse in the movies was born and raised by Roy and how he became such an equine genius. It must have been a relief after all that unpleasantness overseas. 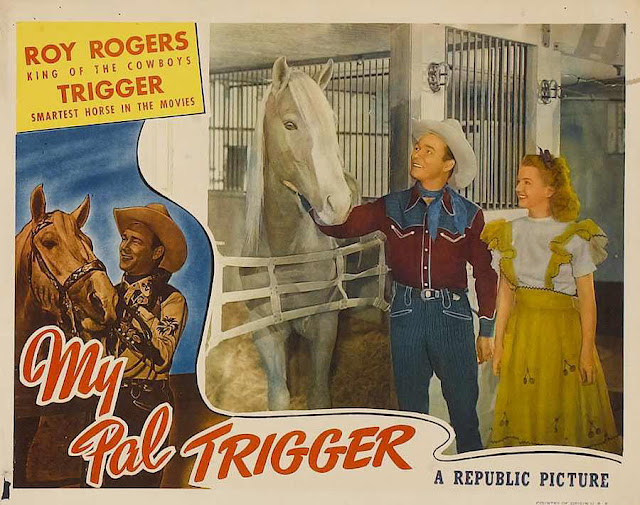 Actually, My Pal Trigger is one of the better Roy Rogers pictures. I agree that isn’t saying too much, and Rogers Westerns were unlikely to be jockeying for Academy awards. But I can’t help it; I still have a soft spot for them. We oldies were all so much younger and more innocent then and while the movies come across now as patronizing and bourgeois, cheesy even, we thought they were great at the time, and secretly in my heart of hearts I still do.


All the classic ingredients are there: Trigger, Dale, Gabby Hayes, the Sons of the Pioneers; but this one is rather more somber in tone. Gabby (he’s Dale’s dad) keeps his antics in check and plays it (for him anyway) pretty straight. There aren’t even that many songs. Some of the story is quite tough. 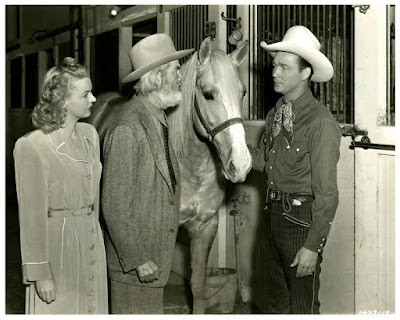 Roy and Gabby don't hit it off at all at first
Gabby and his daughter Dale own and run The Golden Horse, a successful ranch raising palominos. Roy turns up on his mare Lady hoping Gabby will agree to a love-match between Lady and the prize stallion Golden Sovereign. “Golden horses,” Roy tells us in a voiceover intro, “that's what they call the palominos. And palominos have quite a history. You know, the history of my own palomino began right here at this ranch. If I hadn't-a gone through that gate a few years back, I'd never have gotten my pal, Trigger.”


But though welcomed by his chums the Sons of the Pioneers, who are the ranch hands, he gets short shrift from owner Gabby. Worse, when Golden Sovereign is killed, Roy gets the blame (highly implausible, I know) and is run out of the county. However, Golden Sovereign and Lady did get it together (obviously we are not shown the nuptials) before Sovereign’s sad demise and Lady falls pregnant. 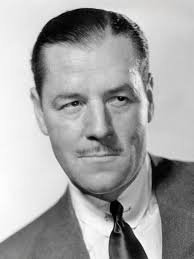 After the death of his prize nag Gabby goes downhill, losing interest in the ranch and gambling (and losing) too much at shady neighbor Jack Holt’s casino. Always good to see stocky Jack Holt (left), Tim’s dad, and he looks particularly smarmy and villainous here in that sleek suit and caddish mustache. Jack is casting covetous eyes over Gabby’s ranch and horses, and of course it was he who killed poor Golden Sovereign, not Roy at all.


Roy rides the West, through snow and ice, and eventually the foal is born. “Time to be here and there he is,” says Roy. “You're kind of quick on the trigger, son.” A man asks, “What are you going to name him, Roy?” and Roy answers, “I just did. It's Trigger!” So now you know.


Well, now young Trigger grows up and there are good lessons for the kiddies in the audience when disaster strikes, Roy has to shoot Lady after a mountain lion gores her, and Roy tells Trigger (really he’s telling us all) “It's like I told you, Trigger. Sometimes it's fun and sometimes it's tough. You got to take the breaks the way they come. Life is sort of like gambling. You can't always win.” Not sure the gambling metaphor was entirely suitable for the juvenile 1940s audience, but still. 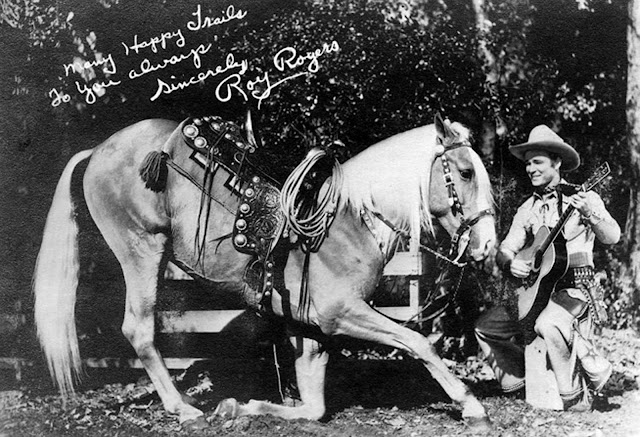 There’s a climactic horse race with Gabby’s ranch riding on the result. Dale is racing for The Golden Horse and Roy is riding Trigger for Jack Holt. But Roy is conflicted. He wants to win, of course. But if he beats Dale (and he’s soft on her) her pa goes under. And villainous Jack Holt has got his henchmen jockeys to box Dale in and unfairly prevent her from getting ahead. Roy can’t stand that.


Well, you’ll have to watch it to see the outcome. Though I think you may have a shrewd idea even before you do.


It was directed by Frank McDonald, who did a lot of Roy Rogers and Gene Autry oaters for Republic, with 2nd Unit director Yakima Canutt also apparently contributing a lot, uncredited. It’s 79 minutes of acceptable black & white, though the movie now being in the public domain means that there are several shorter and less good quality versions out there.


Enjoyable in a nostalgic way.