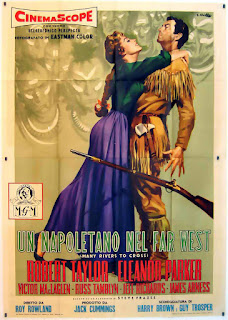 Coming so soon after the studio’s splendid Westward the Women (1951), this labored frontier comedy with the same star, Robert Taylor, was a huge disappointment. Though the intro card raises our hopes by saying, “We respectfully dedicate our story to the frontier women of America” and goes on to say that “they were gallant and courageous”, in fact what we get is a trite romance.


It reminds us very much of the studio’s Seven Brides for Seven Brothers of the previous year, and the similarity is reinforced by the presence in Many Rivers of Russ Tamblyn and Jeff Richards. Not that Many Rivers is a musical; we are spared that anyway. There is only one song, crooned over the titles, though it is endlessly sung by characters, hummed and reworked orchestrally throughout the movie until we are heartily sick of it. But the two pictures look alike, with typical expensive but cheap-looking MGM studio work, garish colors, phony sets and slapstick ‘humor’.


Neither Seven Brides nor Many Rivers is a Western in any real sense. They just use ‘the West’ (in this case 1798 Kentucky) as a backdrop for foolishness. Robert Taylor as hero Bushrod Gentry has a fair go at the comedy and doesn’t look too silly in his buckskins and coonskin cap. His nemesis, the faithless, untrustworthy and untruthful Mary Stuart Cherne (Eleanor Parker) is nothing short of maddening and you much regret Bushrod’s final capitulation to her.

Much of it is frankly boring
She has four brothers ready to believe her lies (e.g. that Bushrod has got her pregnant) and her father is Victor McLaglen, looking old and ill but still trying for the broad comedy he provided for John Ford. Alan Hale Jr. as clodhopper Luke is Mary’s suitor and thus rival to Bushrod, though Bushrod does everything he can to get Luke and Mary to tie the knot. The trouble is that it just isn’t funny enough. The whole thing falls flat. 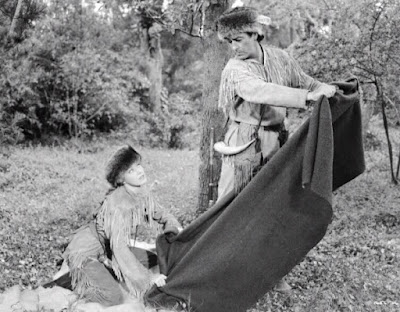 Doubtless some people found it funny
Then there’s an incongruous scene with James Arness when Bushrod saves his baby daughter from a fever. It jars and doesn’t fit.


Roy Rowland was a pretty well talentless director. He was a lowly script clerk who married Louis B Meyer’s daughter and then miraculously got work directing. He ended up directing spaghetti westerns in Italy, which was about his mark. Certainly he seems to have had little idea of how to turn out a successful comedy, regardless of the high budget. 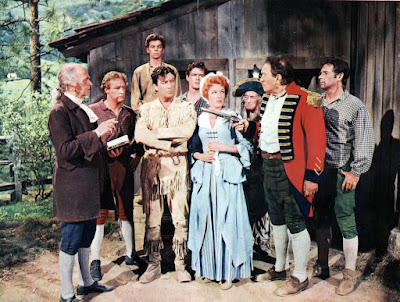 Shotgun wedding
The nearest the movie comes to being a Western is when the Shawnee attack. But they are only nameless Hollywood Indians who are fodder for Bushrod’s heroics.


Certainly the worst of Robert Taylor’s Westerns (if Western it be), this one can be safely skipped.