Low budget and it shows 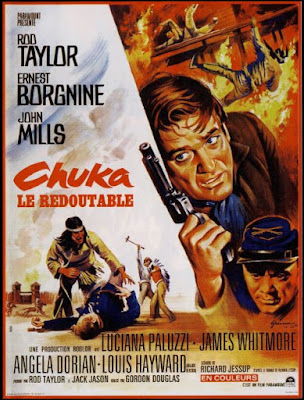 Chuka (pronounced with a short u, like the polo boot) is a man, one of those brave, savvy tough types, a man who knows Indians, smoldering you might say, taciturn but with deep passions beneath. Portrayed by Rod Taylor, who also produced the picture, he is a Shalako-like scout in buckskin, wise in the ways of the West. Mr. Taylor, who heads the cast, was an Australian, quite famous as George in The Time Machine and Mitch Brenner in The Birds, but he was in fact a good actor, as John Ford understood (he was Young Cassidy), and an intelligent and thoughtful person. He didn’t do a lot of big-screen Westerns but his rugged looks suited the roles. He started with a small part in Top Gun in 1955 and Chuka was his second (true) Western and first as lead. Later he would be the star of The Oregon Trail and Outlaws on TV. He is more than competent in Chuka, it must be said, and probably the best thing about the movie.


The rest of the casting is verging on the bizarre. A very isolated US Army fort lies in the middle of a plain in Spain, besieged by Arapahos, and its commandant is posh Brit Sir John Mills. South African Louis Hayward is an unpleasant and corrupt major who secretly keeps an Indian girl as a sex object. Italian actress Luciana Paluzzi is a Mexican countess (well, Italian, Mexican, it’s all the same; they’re both Latin, ain’t they?) and Ernest Borgnine is a German sergeant. Only James Whitmore as the post scout really convinces. 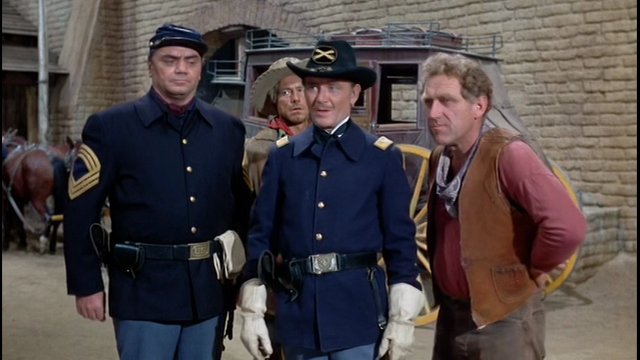 Whitmore's good anyway
It’s one of those traditional plots were the knowing Westerner comes up against the rigid by-the-book martinet commander from the East (in this case very far East), a bit like John Wayne and Henry Fonda in Fort Apache, except that Fort Apache was a good film. This commandant is impotent and a drunkard (they are related matters) and also pretty damn stupid. (It’s one of those Roger Ebert ‘Idiot Plots’ where the whole mess could have been avoided if only the characters hadn’t acted like complete imbeciles.) 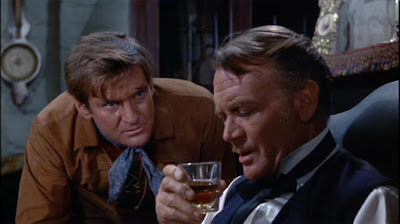 He tries in vain to convince idiotic by-the-book commandant to do the right thing
It’s a flashback movie which starts with an officer dictating a letter to his superiors recounting the mystery of the burned, empty and abandoned fort. Then the screen goes all blurry, you know how they do, and we get the events which caused the disaster. 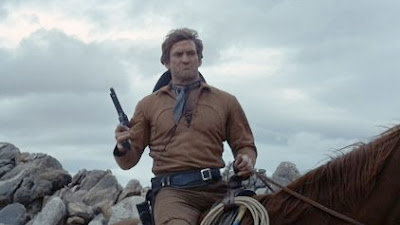 Rod as the Shalako-ish man-who-knows-Indians
The very improbable story was written by Richard Jessup from his own novel, his only big-screen Western screenplay. The budget was minimal and the fort looks like a papier maché toy. The director was Gordon Douglas, who did direct a few fun Westerns. I like Yellowstone Kelly, The Nevadan, Fort Dobbs and Rio Conchos, and of course his The Fiend who Walked the West was an epic. His Only the Valiant with Gregory Peck in 1951 had certain aspects in common with Chuka. But Douglas also churned out some pretty low-grade ore, and I fear this one belongs in the latter category.


You could watch it – well, you gotta – but probably only once. 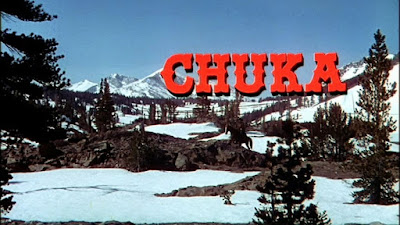 It ought to have two K's in it, I feel 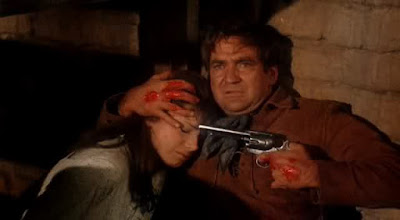 Saving her from a fate worse than death by, er, death. This scene was an oldie - used by Francis Ford in The Invaders, John Ford in Stagecoach, Cecil B DeMille in Union Pacific, and so on, ad infinitum.