Cheyenne Autumn was John Ford's swansong, his last Western, made when he was past his prime, had lost his touch and had even lost interest. It is really sad to give this film only a 2-revolver rating – it’s John Ford after all - but this and an earlier 60s picture, Two Rode Together (1961), were probably the least of Ford’s Westerns.

Cheyenne Autumn did not, however, deserve the “worst film of the year” award that it got from the Harvard Lampoon. It has major weaknesses, yes, but when it comes down to it, it is quite moving in parts and visually it is very fine with many artistic touches. Cinematographer William Clothier was himself a considerable artist and he had worked so much and so well with Ford that they understood each other without the need for words. The DP certainly made the most of the widescreen format. It was as well, for Ford seemed to have lost his gift for framing.

Furthermore, some of the performances are really quite good: one might mention the beautiful and noble Spanish Woman (Dolores Del Rio), the rival brother chiefs Little Wolf (Ricardo Montalban) and Dull Knife (Gilbert Roland) and even Sal Mineo as Red Shirt – we were still very much in the era when Native Americans were played by Mexican actors. And the Indians speak Indian to each other, and not ug-English. (Actually, the ‘Cheyennes’ are Navajo, telling dirty jokes in Navajo, but that’s OK).

Of the principal white characters, Richard Widmark leads, playing a soldier again, as he had for Ford in Two Rode Together, and he was always good in Westerns, but the Westerns he was in weren't always so good. The role would have suited other actors, John Wayne, most obviously, or Wayne’s co-star on The Horse Soldiers, William Holden. Carroll Baker is OK as the earnest Quaker schoolteacher Widmark falls for, though nothing special, I thought. Ben Johnson, Harry Carey Jr. and Denver Pyle are in it but totally wasted. Blink and you miss them. The worst performance of the cast, understandably because he was such a ham, is that of Karl Malden, here playing a drunken German officer on the edge of insanity; such a role gave him license to chew the scenery and boy, does he make the most of it. He almost sinks the picture single-handed.

The story goes a long way to redressing the wrong of Ford’s early treatment of Native Americans, whom he represented, for years, as savages to be shot down without compunction. Here we have the plight of a brutally mistreated Cheyenne people, sympathetically treated. Ford said, “I like Indians very much. They’re … a very moral people. They have a literature. Not written. But spoken. They’re very kindhearted. They love their children and their animals. And I wanted to show their point of view for a change.” But these schmaltzy generalizations come across, to me anyway, as paternalistic and patronizing.

Yellow Ribbon, but without the class
It is 1878/79. The Cheyenne leave the reserved lands in Oklahoma to return to their homeland on the Plains, pursued by the US Army. The story was “suggested” (read ‘much altered’) by the 1953 book of Mari Sandoz, writer of the famous biography of Crazy Horse. Her in-depth research and admiration of the Plains Indian culture shines through in her Cheyenne Autumn. Ford, who was a great reader, had been interested in the book when it came out and went so far as to get Dudley Nichols to do a treatment but the project raised no interest at all at that time. 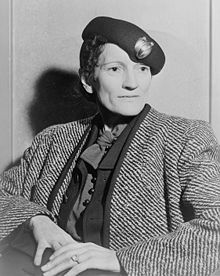 Sandoz
But in the mid-60s, astonishingly, Ford, aged 69, frail, with failing eyesight and with several loss-making movies in his recent past (including for Warner Brothers), got Warners to stump up $4.2m and to commit to Super Panavison 70.


For some bizarre reason Ford must have been impressed with James Webb’s script for the mega-turkey How the West Was Won two years before (of which Ford directed a segment) because he paid Webb $100,000 of the budget plus 20% of the producer’s profits. It was a mistake. There’s even the line, “There’s a train at seven this evening for the West. You be on it.” Oh dear.


A structural problem of the picture is that the Indians are there as remote victims, “reacting, never acting” as Scott Eyman has said in his biography of Ford. We don’t get sufficiently close to them or their motivations. Their plight is seen from a distant, and white perspective - reinforced by the voiceover by Widmark.

For an uncommercial ‘social issues’ picture Ford needed all the star power he could get and he called in markers to get the likes of James Stewart and Spencer Tracy, but Tracy backed out, claiming illness, and Ford had to be content with Edward G Robinson to play Secretary of State Schurz – who in fact did an excellent job (he’s one of the few good things about the picture).

EGR as Schurz. Ford was of course a lifelong admirer of Abraham Lincoln.
But Stewart had little more than a cameo part, and another major weakness of the film was his quarter of an hour interlude as Wyatt Earp with Doc Holliday in Dodge City. It is completely irrelevant to the action, out of tone with the rest of the picture and irritatingly unfunny. Ford could rarely resist low comedy (it was his principal flaw) and this is one of the worst examples. A singularly uncomic Stewart as Earp (in, however, a splendid hat) and a bourgeois-looking and rather dull Arthur Kennedy as Holliday in a derby have a routine that should certainly have been cut in its entirety had any editor worth his salt (this one was Otho Lovering) been able to stand up to Lord Ford.
. 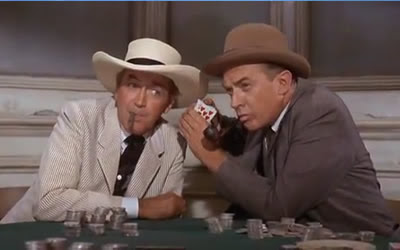 Should have been left on the cutting room floor
The Cheyenne leave Monument Valley (we wonder what they were doing there in the first place), travel 800 miles and end up in – Monument Valley. Never mind. It’s a spectacular location. Ford of course loved it there and on this, the last time that he used it as a setting, he lorded it as if he owned the valley. Still, Ford told George O’Brien (playing an Army major), “George, it’s not fun anymore.” O’Brien told his son that Ford had lost touch with his own gift, that he had a low attention span and had no real interest in making movies “but continued to work because of a lack of any real alternatives”.

Harry Carey watched day after day as the Indians marched across Monument Valley, stopping to deliver some dialogue, then marching some more. “I never knew what was going on, but I chalked it up to my being just plain dumb. I was to discover, however, that no one else did either. They did what the Old Man told them. Naturally, they trusted him – he was John Ford – so there must be some reason for what they are doing.”


There were delays and overruns. Ford had been famous for getting them in on time and on budget but he had lost his touch. The picture meandered. At one point Ford turned an ankle and got zoned on codeine pills. Widmark took over direction for a while. Clothier later said, “On Cheyenne Autumn, the same thing happened as happened on a number of the old man’s later films – he’d give up. Just get tired and lose interest.” 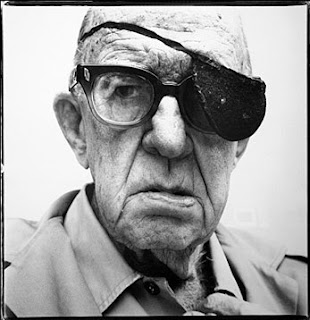 John Ford by Richard Avedon, 1972
When Ford wrapped the picture there were polite noises at Warners followed by throat-clearing. Eyman says, “Ford had turned in a sluggish, muffled picture.” But short of expensive re-shooting there was little the studio could do. With overruns they already had over $7m tied up in the movie. It launched at 154 minutes.


The reviews were, let us say, modest. Typical was The Cleveland Press, which said, “Cheyenne Autumn is a near miss, a motion picture with good intentions.” It was nominated for only one Oscar, for Clothier’s cinematography. Box-office was similarly disappointing: on a $7.3m outlay it grossed $3.1m domestically. Even with overseas sales, in September 1966 it was still heavily in the red.


The world was changing, but not John Ford. The year of Cheyenne Autumn was also the year of A Fistful of Dollars. The two ‘Westerns’ were hardly related.


The old expression last but not least does not apply here. Of Ford Westerns, this was the last and the least.

In more ways than one