It just gets up to two revolvers

Treasure of Ruby Hills is an ultra-low-budget black & white Allied Artists B-Western of the mid-50s, directed by Frank McDonald and with Zachary Scott as lead. These omens do not augur well… 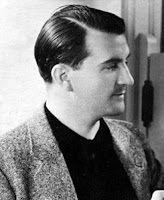 Mr. McDonald (left) worked for almost every studio there was at one time or another, as writer or director of B-movies, especially cranking out Gene Autry and Roy Rogers Westerns at Republic. He was not entirely comfortable as a director – Evelyn Keyes once said of him, "I've never seen anyone as terrified of directing as Frank McDonald". He had the experience, alright, but, well, John Ford he wasn’t.


As for Zachary Scott, he had been a reasonably successful, if rather weak-chinned, leading man at Warners, usually doing suave scoundrels, but Warners didn’t really promote him, he had personal problems and his career declined. He wasn’t a great Westernista, only appearing in seven (a low number for studio stars in the 50s) and only leading in two. I didn’t mind him as one of Joel McCrea’s sidekicks who goes over to the dark side in South of St Louis, and as the bad guy who stole Randy’s new Colts in Colt .45. He was also an excellently nasty convict in The Secret of Convict Lake and figured as bad guy opposite Sterling Hayden in Shotgun the same year as Ruby Hills. He would be the evil arms dealer in Bandido the following year. So he did few oaters but the ones he did weren’t bad and he had quite big parts in them. As a Western lead, though, he doesn’t really cut it. 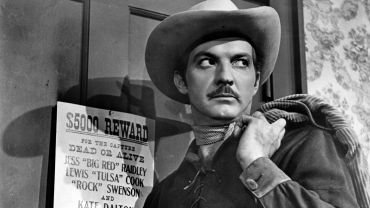 Zach does his tough guy act, as a goody for once
The movie has its saving graces, though. For one thing, Raymond Hatton is the elderly hotelier Westbrook Scott who allies with the hero Ross Haney (Scott), and it’s an entertaining and quite memorable performance. Lee Van Cleef is a hired gun, eventually shot down in a classic quick-draw in the saloon. Barton MacLane is the ruthless rancher who will stop at nothing, and good old Barton was always reliable. And I spotted Glenn Strange, ultra-briefly (he had one line) as a henchman. I always like Glenn as a thug. And occasionally there are some noirish touches. So it's not all bad. 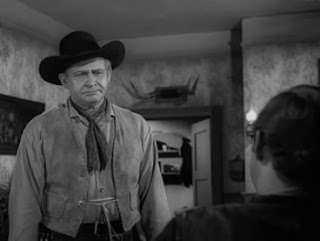 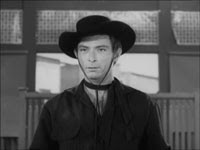 Hired gun Lee
It’s an Arizona story, 1877. The action flits between various towns, Arlington, Silvertown (not Silverton) and Soledad, they are called. One of them, Silvertown, is a ghost town and the action climax will take place there. The titular treasure is water, and Ross has cornered the springs in the valley, which puts him on the ranchers’ hit list. There are two ruthless ranchers (MacLane and Charles Fredericks) and also a third pipe-smoking bad guy (Dick Foran) cunningly working behind the scenes and Yojimboishly fomenting hatred between the two ranchers and their men. It’s actually an over-complicated plot and it isn’t always clear who is who and why they are shooting people. It was a Louis L’Amour story (Rider of the Ruby Hills) but there isn’t time to delineate all the characters, still less develop them, even if screenplayists Tom Hubbard and Fred Eggers and director McDonald had been able. The characters talk too much and there are too many cheap interiors. 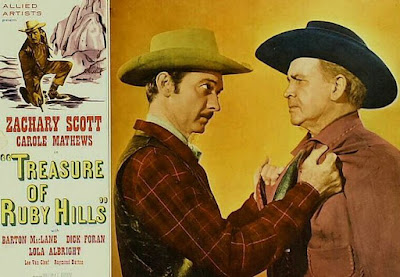 The hero braces rancher MacLane
There’s a gal, of course, Sherry (Carole Mathews, who lost out to Lauren Bacall for the big part in To Have and to Have Not), for whom hero Ross will inevitably fall. She challenges Ross to a horse race, $100 against his saddle, loses and welches on the bet. He later says to her brother that she may be a woman but she’s no lady. But they eventually get it together and it’s lerve.


You see very modern power lines for the 1870s but never mind.