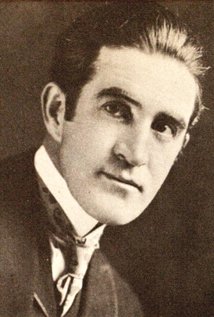 Francis Ford (1881 – 1953) was John Ford’s elder brother. In another, parallel universe, we might have explained who John Ford was by saying he was the younger brother of the great Francis, and John followed on the coat tails of Francis in many ways. But as it is, of course, it was Jack who would gather all the plaudits and Frank would be consigned to bit parts in his brother’s movies. Nevertheless, Francis Ford played an important part in the history of film, especially Westerns, and he does not deserve to be forgotten.


Francis Feeney was born in 1881, in Portland, Maine, twelve years before his brother Jack. Though his parents were saloon keepers in a dry town, the family was ‘respectable’, home-loving and steady. It was soon very clear, however, that the mercurial and hard-drinking Frank was anything but home-loving and steady. He dropped out of high school and went off to the Spanish-American war, and afterwards left home and worked as a tailor. Scott Eyman, in his excellent biography of John Ford calls Frank “the randy black sheep” of the family. He met a woman, Dell Cole, in Portland and got her pregnant; there was a shotgun wedding which barely preceded the birth of Frank Jr. The marriage did not last. Dell took the infant and went to Boston. Frank began a raffish existence cleaning gas lamps and working in vaudeville in New York. Somehow he got into the early movies as a journeyman actor, moving from one company to another, including Edison, mostly in New Jersey, the ‘Hollywood’ of the time.


Perhaps to avoid bringing shame on the family, Frank changed his surname, to Ford - for, he said, the automobile, though John had another version (but then John was an inveterate liar), that Frank stood in for an actor named Francis Ford and got stuck with the name. At any rate, Ford it was from then on.


Frank Ford developed a liking for and affinity to Westerns. In the latter part of 1911 Frank joined Thomas Ince, a step up, and he was soon doing other duties for Ince, scouting locations and placing the camera. He toured Texas, the South West and California, and soon Ince leased eighteen thousand acres near Santa Monica and started making Westerns. They quickly became so popular that he needed to expand production. In June 1912 Ince divided the company in two and put Frank in charge of the new unit.


Ince was a bit of a control freak, though. He gave Frank detailed shooting scripts with each shot carefully described, and Ince would view the rushes personally each evening and edit the negative. And of course it was Ince’s name credited as director.


Still, it was a great start. Thus did Francis Ford become one of the pioneers of the early Western. 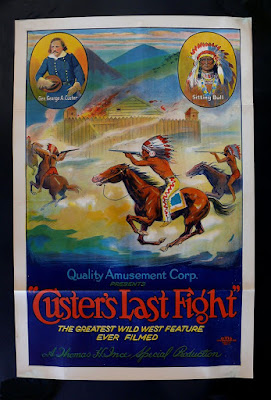 The poster for the 1920s re-release
One of the films, the 30-minute Custer’s Last Fight, with Frank as the first ever screen Custer, created a great stir and was so good that it was re-released in 1922 and again in 1925 (though movies had moved on enormously by then, it still stood up as a fine picture). It is a fascinating film, though of course heavily pro-Custer, who is a true hero and martyr. Another, The Invaders, released in January 1913, seems to have been pretty well Frank’s work, though of course Ince hogged the credit. Eyman says of it:


The acting is ordinary, as are the interiors, but Frank’s exteriors are superb, the full equal of the work his brother, not to mention William S Hart, would be doing in a few years.


Eyman also says that ”Some of Francis’s films for Ince were so good that DW Griffith followed dutifully in their footsteps.”


Frank delighted in leading journalists off on a false trail with made-up yarns, saying, “It will look awfully funny in print”. John was to adopt this habit, as indeed he emulated Frank in so many other ways. Frank loved far-away places and ocean voyages and would be off to the South Seas at the drop of a hat. On the set Frank was brusque, rough and often sarcastic. But a writer for Motion Picture Magazine said of him that underneath his bluff manner there was a deep seriousness and “one of the warmest hearts imaginable.” Either the two brothers were remarkably similar in character or John consciously modeled himself on Frank. 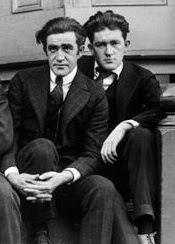 Frank with brother Jack
Frank had remarried, a woman named Elsie van Name, but now fell in love with the actress Grace Cunard (named by Carl Laemmle after the shipping line he habitually used), Libby Custer in the 1912 film. At Grace’s urging, Frank started asserting that he, not Ince, was responsible for the quality of many of the recent pictures, and after Texas Kelly at Bay in March 1913, Frank left Ince and went to work for Laemmle’s Universal.


His first picture for Universal was hailed for “the director’s masterly handling of the battle scenes”. Between 1913 and ’16 Frank directed and produced some eighty films of one to four reels, and four serials. Ford and Cunard became the leading stars of the era. Back in Portland, Jack was enthralled with his brother’s success. Straight after graduating from high school Jack went out to California and already in August ‘Jack Ford’ as he suddenly became had a minor part in one of his revered brother’s pictures. 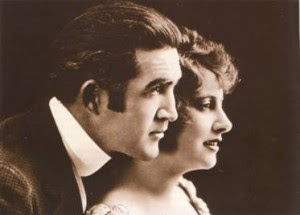 Frank with Grace Cunard
Frank’s manner with brother Jack was rough and ready. Jack did a lot of doubling for Frank, as they looked reasonably alike. Once too much gunpowder was used in a Civil War picture and Jack woke up in hospital with a broken arm. Frank’s sympathy only extended to saying, “That was a close thing. Another second and audiences would have realized I was using a double.”


Jack Ford, though, was a man who remembered, indeed, nurtured a grievance. And in later life the rough fraternal horseplay would be returned many times over.


By early 1916 Frank was at the top of his game, famous, well off and lauded. It was not to last.


It is said that Frank’s directing style failed to evolve in a rapidly changing world of movie making. His personal issues, the sarcasm and the drinking, not to mention the scandalous affairs, did not help. He began to find it harder to make pictures. In April 1916 Frank and Grace walked out of Universal in the middle of a serial when a functionary demanded that Frank reimburse $100 for a tent that had burned. Universal gave way but soon there were other ructions. Grace married someone else. Frank went on the bender of all benders.


In 1917, he founded his own independent company, Fordart Films, and opened his own studio at Sunset Boulevard and Gower Street. Several movies were produced starring Frank, many of them very cheap and of poor quality. They were doomed ventures anyway. Finding theaters that would release independent films was increasingly difficult. The studios were closed and Frank descended to directing cheap Westerns for Poverty Row studios through the 20s.


As Frank’s career declined, so his brother Jack’s was on the rise. Jack was directing some high quality Westerns for Universal starring Harry Carey (see, for example, Straight Shooting of 1917) and moved up to Fox in 1920. He started giving his brother Frank small parts in some of his movies. In 1924 Jack (now more grandly referred to as John) Ford directed the epic The Iron Horse but although there was a huge cast there was no part for Frank.


Frank Baker, a plain spoken Australian who met Francis in the South Seas, worked with him on movies back in the States and then worked often for John, wrote tellingly of Frank:


He was an extraordinary man. In some ways he was very much like John. He and Jack didn’t get on very well. … Everything that John Ford did, I could see the reflection of Frank. Camera angles and different touches. [John] would say, ‘How do you like that?’ And I’d say, ‘I’ve seen that before,’ and he’d go as cold as anything. He had an amazing admiration for his brother … but he was completely jealous of him.


John Ford was a spiteful and insecure man who had learned from his older brother but, though certainly John had developed into the greater artist, he could never shake off his sense of inferiority to Frank.


Francis, on the other hand, was never bitter or spiteful. He admired his younger brother’s skills (his son Francis Ford Jr. said, “He was kind of proud of him”) and willingly accepted even uncredited bit parts in his movies, often as drunks, which others considered demeaning. By the 1930s Frank was getting no directorial assignments at all, not even for Poverty Row studios (he never directed a talkie), and acting parts were irregular and infrequent. For the rest of his life Frank would be dependent on Jack.


On the Senses of Cinema website, Charles Barr gives an interesting list of Frank’s parts in John’s films, which I take the liberty of reproducing here (I have put the Westerns in bold). It is not fully inclusive; some of the silent movies have been lost and in others he shows up on cast lists but is not there in existing prints.


In some of these parts Frank stands out despite the very minor status of the role. In Stagecoach, for example, though uncredited and with no lines, Frank’s barman seems a strong presence at the stage way station, and the crucial business of Mrs. Mallory being invited to change places at the table, away from the prostitute Dallas, is seen, as it were, through his eyes. He also appears quite often in My Darling Clementine, memorable even as the hotel porter.

Frank also appeared in a host of Westerns with other directors, often uncredited but you spot him, in the saloon, for example. He is especially noticeable in The Ox-Bow Incident as Dad Hardwicke (left). IMDb credits him with an astonishing 492 appearances as actor, between 1909 and 1953, perhaps 250 of them Westerns. He may have directed and/or produced and written 180-odd movies.


In 1953, soon after appearing in John Ford’s The Sun Shines Bright, Francis Ford died, aged 72. It certainly affected John Ford deeply, though as usual he did little to show it. Whenever he met Frank Baker he would say, “We gave Frank a good send-off, didn’t we?” as if a ‘good’ funeral could absolve him of blame for the way he had treated his brother when Frank was alive.


Francis was a very nice man, a very, very nice man. I won’t say ‘unlike his brother,’ but he was different than Jack.