Joel goes back to Frisco

I don’t usually care all that much for pre-Civil War San Francisco stories. They tend to be hardly Westerns at all, more period costume dramas. Joel McCrea had actually started in one, third billed in Barbary Coast in 1935. It was quite enjoyable but was really more of a Victorian gangster tale than a proper oater. But Joel returned to Frisco (as they called it then) in 1952, when he was a very established Western lead actor, in a picture that was much closer to the Western tradition, The San Francisco Story. 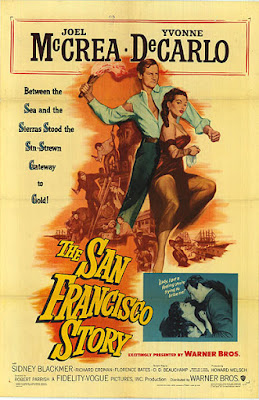 It’s an 1856 tale (though of course they all have 1870s Stetsons and Colt Peacemakers) and it does have men being shanghaied and fog and the waterfront, so it’s a real San Francisco story in that way, but most of the plot could have been set anywhere in the West and the action is reminiscent of many a proper Western.


Rick Nelson (Joel), no relation to the pop singer, rides into town with his sidekick Shorty (Richard Erdman, rather good) and meets up with his old partner Capt. Jim Martin (Onslow Stevens) who is the local newspaper editor but seems to spend more of his time hanging folks as head of the Committee of Vigilance – which has a headquarters, signboard and everything. Rick used to be a vigilante but the last five years he’s been mining gold instead. Rick soon discovers that the town is run by crooked boss Andrew Cain (a part tailor-made for Victor Jory but sadly it’s Sidney Blackmer, often Theodore Roosevelt in movies) and Cain has a fancy woman, Adelaide, known as Addy (Yvonne De Carlo).


See what I mean? So far, so ordinary Western. But it’s well written (by good old DD Beauchamp from a Richard Summers novel) and contains some witty lines. The main characters are knowing, rather cynical, clever and unscrupulous, and the dialogue reflects that, although it’s a Joel McCrea Western so his character is quite scrupulous, deep down. I liked Joel’s remark that it was so quiet you could hear a body drop. 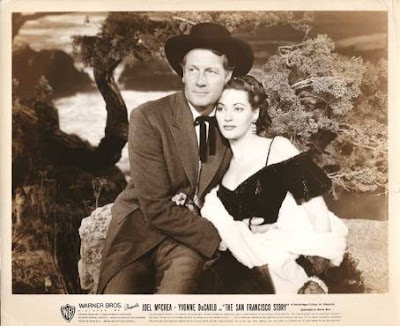 Joel and Yvonne in a studio publicity still
John Doucette has a bit part as the unfortunate ‘criminal’ hanged by the vigilantes from a beam protruding from their building. The hanging is well done in a gruesome off-stage way: we see Joel’s foot on the beam and it slips off when the beam suddenly moves.

The director was Robert Parrish (left) who had started as an actor (he was in City Lights and All Quiet on the Western Front) and then worked as a sound man for John Ford, for example on Stagecoach. In 1947 as an editor he won an Academy award for Body and Soul. He moved to directing in the early 50s and did two fine Westerns, Saddle the Wind and The Wonderful Country. He is also co-credited as director with Nicholas Ray on The Lusty Men (he directed the picture when Ray fell ill). He was a thoughtful and talented film maker. He had some good touches too, such as Joel examining a portrait of Yvonne in the saloon using a shot glass as a telescope. Rick and Addy ride out along the coast in a buggy in the moonlight, with distant crashing Freudian surf. (maybe that's where Brando got the idea, in One-Eyed Jacks). And I loved the scene in a saloon which is a converted ship, run by the formidable Sadie (Florence Bates, splendid) in a Raoul Walsh-style eyepatch. She slips men mickey finns and sells them to ship captains for 300 dollars. Not very polite when you think about it. She nearly does that to Shorty but Rick rescues him.


Joel rides really well (he always did) and best of all, shady lady Abby has a derringer which she pulls on her man Cain (she’s by now fallen for Rick instead). It’s rather a modern derringer: you’d expect it to be like the one John Wilkes Booth used, it being 1856 and all, but it’s one of those shiny modern ones that I like so much, almost invariably used by shady ladies, gamblers and crooked saloon-owners. Although John Wayne and even Randolph Scott (gasp!) used them occasionally, so they weren’t exclusively for villains. Anyway, it’s a highlight of the movie. 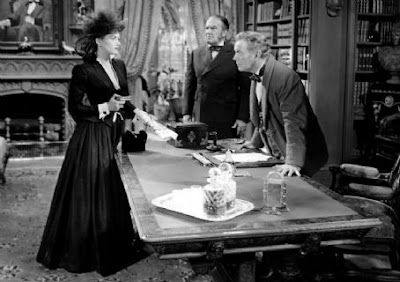 Yvonne pulls a derringer on the bad guy
I’m not a great Yvonne fan but she’s OK, I guess. At least she doesn’t sing. Joel is great, of course, as he always was.


There’s a hero/villain duel in the last reel, shotguns at dawn on the beach, so that’s a bit unusual. 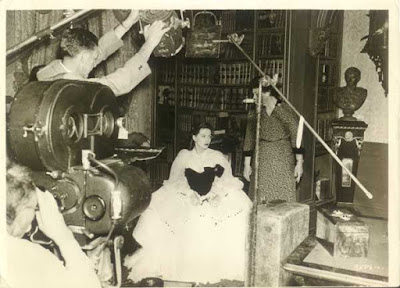 On the rather plush set
The SF Story was one of only two pictures that Fidelity-Vogue Pictures made, released through Warner Brothers. It was no big-budget affair, more of a black & white B-Western really, but it’s well handled and quite a lot of fun. Definitely watchable. Probably a two-revolver Western if the truth be told but it got up to three for Parrish and McCrea.
Posted by Jeff Arnold's West at 10:00 AM