Not what you'd expect It comes as something of a surprise to see a black & white psycho-western from Paramount as late as 1956, the year, after all, of big color Westerns like Warners’ The Searchers. These small, intense, rather noir psychological Westerns seem to belong more to the late 40s. One thinks of Pursued or Blood on the Moon. But in ’56 Jack Palance, in his fourth Western, made a kind of return of his Wilson in Shane. You have to imagine that Shane didn’t shoot him, then that he wandered the West as a gunslinger and finally met with personal sorrow. A stretch, I agree. But that’s the character of Jacob Wade (not Jake Wade, he was another gunman). Palance plays up the anguish as he comes home to find his wife dead and a son who hates him. Palance wasn’t always good in Westerns – some of his later ones were frankly dire – but when he was on form, with a decent script, he could do intense gunmen very well.


The boy with daddy issues is Anthony Perkins, then 24. He plays a neurotic, oversensitive youth who blames his gunslinger daddy (who suddenly appears and in a Darth Vader moments announces his paternity) for the death of Mom - she jumped off a cliff when she could stand it no more. Actually, he has mommy issues too (perhaps he was practicing for his motel job in a few years). He thinks she was a martyr and saint; it transpires that she wasn’t quite so saintly. But you can’t tell the boy that. Perkins only did three Westerns (four if you count Friendly Persuasion) and we don’t really associate him with the genre. In one of them, The Life and Times of Judge Roy Bean, blink and you’ll miss him (and a good thing; he is singularly unfunny). So there really are only two. In The Tin Star the year after The Lonely Man, however, he had a lead part as the green young sheriff mentored by Henry Fonda, and wasn’t bad. 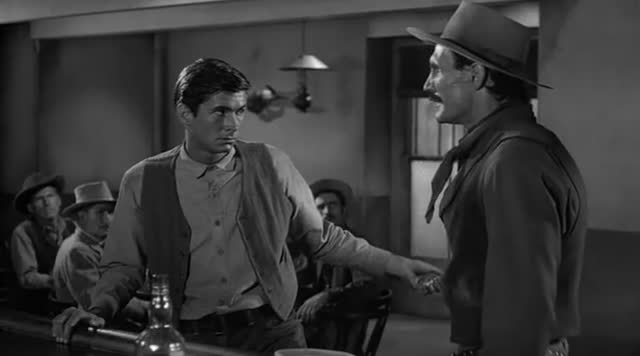 He throws a drink in Dad's face. Angry son.
So son loves Ma and wishes Pa were dead. Yup, it’s a Western Oedipus. Within safe limits, of course. It is the Hollywood 1950s after all. And it’s Dad who goes blind. It sounds a bit like The Shepherd of the Hills, doesn’t it? Well, yes, here and there.


Given the son’s hatred for his daddy, it’s rather odd that he should agree to ride off with him to find a new life. But he does. They drift from place to place, being run out of towns as undesirables. Finally, the boy falls ill and Wade takes him to the ranch he had been staying at, back in his outlaw days, living with Ada (Elaine Aiken, billed only fourteenth, in her only Western). He’s not interested in Ada. He wants the boy to get well, he wants to bond with him, he wants to hang up his guns and live in peace. 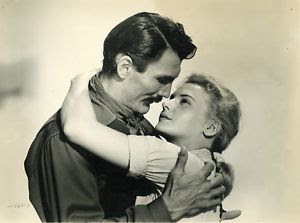 She loves him but he's not interested
Fat chance, of course. The outlaws come back to claim him as one of their own, and won’t take no for an answer. It’s rejoin the gang or fight. No prizes for guessing which he chooses.


The great thing about The Lonely Man is not really the principals, though Palance is good and Perkins OK; it’s the rest of the cast. Right away you see one outlaw band headed by ruthless Neville Brand, thirsting for revenge on Wade, and in his gang are Lee Van Cleef and Elisha Cook Jr. Wow. Elisha is fond of a drop and Lee is a slick frock-coated gambler named Faro. Lee and Neville cook up a low-down scheme to shoot Wade from hiding. And Neville has a derringer! Typical.


And then there’s another gang, as if this one wasn’t good enough, and its boss is Claude Akins. Robert Middleton (not that fat yet) is the outlaw now siding with Wade but loathing his son. Denver Pyle is a lawman. John Doucette is there too, and there’s even Russell Simpson playing poker with Denver! What a cast. It’s definitely the best thing about the movie. 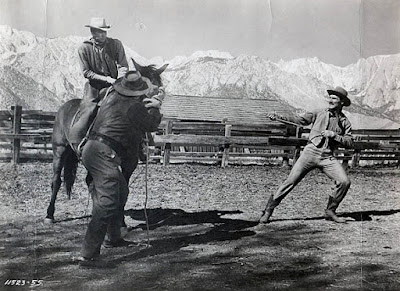 They try to bond by breaking broncs
There’s some very nice scenery, though. The Lone Pine and Sierra Nevada locations are shot in classy monochrome VistaVision by Lionel Lindon, a Paramount lifer who won an Oscar for Around the World in Eighty Days and who started work alongside Winton Hoch on Tap Roots. He had clearly learnt a thing or two.

At the climax Palance walks into the saloon for the showdown just as Shane did three years before. References, huh.

As I said in another post, here, about the lone-ness of Western heroes, lonely was not a word used much in Western titles. Usually, lone or lonesome was preferred, which had solitary but less negative connotations. But this man is indeed lonely and dies as such.


I think you could watch this Western. I don’t believe you’d be disappointed.