The title is redolent of the Western mystique. The other day we were reviewing The Lonely Man and so many Westerns focus on this aspect of lone-ness. I have discoursed elsewhere (here, in fact) on the importance of this. The idea of the solitary Westerner going his lonesome way is fundamental to the screen West. It’s slightly odd in this case, though, because Joel isn’t lone and he isn’t a hand. Oh well, never mind.

Joel McCrea did a few ‘juvenile’ Westerns, or at least Westerns with kids in them, children with whom the audience of boys could identify and their moms could go aahh. Such a one was The Lone Hand, a nicely produced Universal Technicolor oater from the great vintage of ’53.

McCrea was just back from making a not very successful espionage thriller in England. That picture, Rough Shoot, was the only non-Western he made from 1951 (Cattle Drive) to the end of his career in 1976 (Mustang Country). Remarkable.


The Lone Hand stars Cherokee, a splendid white mutt, and co-stars his master, the lad Josh (Jimmy Hunt) about 13 at the time, who also narrates the tale. The third most important star is Joel as a decent farmer gone over to the dark side (he rides with bandits) and then comes his amour Barbara Hale, whom he marries only really as a step-mother for his son but whom he gradually comes to love anyway.

The farmer-dad/young son/white dog set-up does, of course remind us of Starrett/Joey/Shep in Shane, released the previous month - deliberately or not, I don't know. 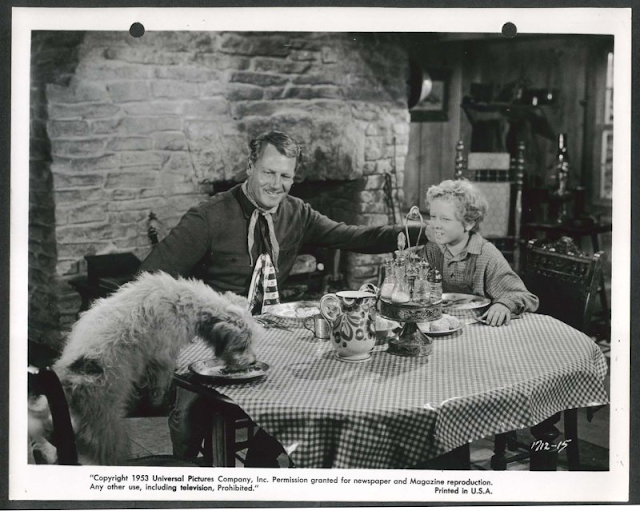 The star of the show (left) dines with his co-stars
That’s the main line-up. However, good news: Frank Ferguson is the banker, James Arness (billed as Jim Arness) is one of the baddies, and Alex Nicol as Arness’s bandido bother and Charles Drake as leader of the vigilantes figure prominently too. Not only that, you can spot Denver Pyle as a bloodthirsty regulator, and a certain Brian Garfield is in the cast list as another boy: could that be the Brian Garfield, later author of the admirable guide to Western Films? Who knows. Anyway, the support acting is there alright. 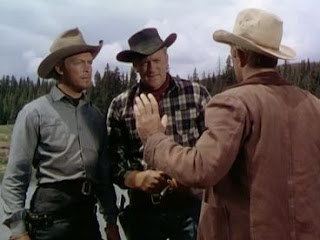 The evil bandit brothers Nicol and Arness prepare to do in the Pink
Widower Zachary Hallock (McCrea) and his young son Josh, accompanied by Cherokee, arrive in the Western town of Timberline (wasn't that the town where Stagecoach West was set?) in a wagon and buy a farm from banker Frank. They work hard doing it up. One day, though, the boy witnesses a murder as the wicked Varden brothers (Nicol and Arness) shoot a Pinkerton man in the back. Josh tells his dad, natch, but Pa orders the boy to say nothing. They are simple farmers, he says, and they don’t want to get involved. The child is perplexed. 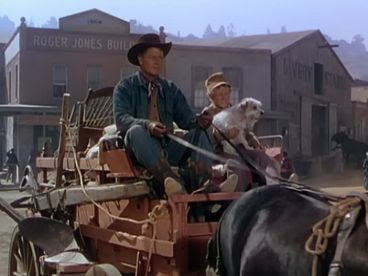 Arrival
The opening of the film is overly bucolic and even approaches the dreaded quality of heart-warming here and there. One is quite put off. But luckily it soon gets tougher. Part of the charm is the gorgeous location shooting, so fine it’s almost suitable for a chocolate box cover. Those who know the area, as I do, will immediately recognize Silverton and the area round Durango, Colorado, and the valley of Las Animas. We don’t get the Royal Gorge railroad but the terrain is absolutely beautiful, and sumptuously shot by Maury Gertsman, a more than competent cinematographer who did 28 Westerns between 1944 and 1967, mostly B-Westerns but some of them, like The Great Sioux Uprising or Cattle Drive – also with McCrea - visually very fine. And on the Sidonis Calysta DVD the picture quality is superb. The Lone Hand is a feast for the eyes. 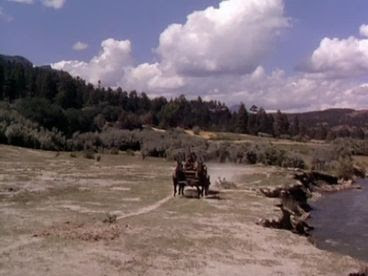 Lovely location shooting
George Sherman directed. Sherman was vastly experienced. He had started in the mail room at Warners and gradually worked his way up. He was a B-Western specialist (for example directing those Three Mesquiteers oaters with John Wayne in the 30s). He had moved from Columbia to Universal in 1948 and some of the Westerns he did for the studio weren’t at all bad. I’m thinking of Chief Crazy Horse, The Treasure of Pancho Villa, Border River (also with McCrea), The Battle at Apache Pass, Tomahawk, others. He handles The Lone Hand well, it must be said. 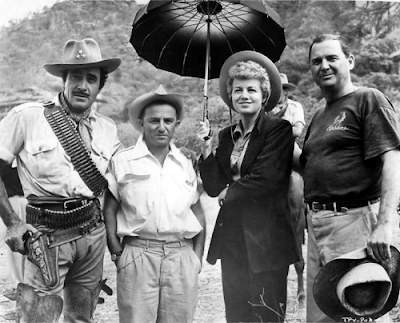 Sherman (the short one) on the set of The Treasure of Pancho Villa
It’s rather clever the way Arness wears a crimson shirt and when Joel joins the robbers he wears one, symbolizing his crossing the line into criminality. Later, when the fleeing boy is pursued by a red-shirted man and we assume it’s his dad, it turns out to be Arness. It’s quite niftily handled. There’s another bit when the boy is talking to his new step-ma, calls her Ma’am and then later in the same conversation unconsciously slips into Ma. It’s rather touching. 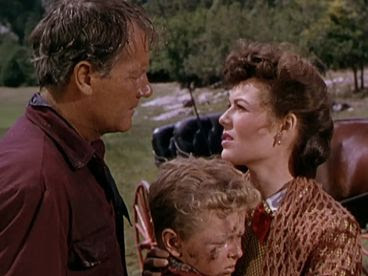 His new mom
There are lots of stunts, one a very unconvincing ‘fall’ (clearly a jump) from the box by the shotgun guard on the stage but others superb, notably when the hero’s stand-in does the famous stunt of slipping from the horses under the stage then climbing back onto it from the rear. Jesse Hibbs (later to direct Westerns himself) was second unit director but tragically the stuntmen are not credited.


You may not be surprised to find out in the last reel that the hero isn’t totally bad after all. And you don’t have to be Columbo to guess who the secret leader of the bandits is. But never mind, it’s a fun outing in the saddle, an enjoyable B-Western with good acting (especially by Cherokee, I thought) and altogether you will find that it repays a DVD purchase.

It got up to three revolvers for the dog, Joel and the scenery. 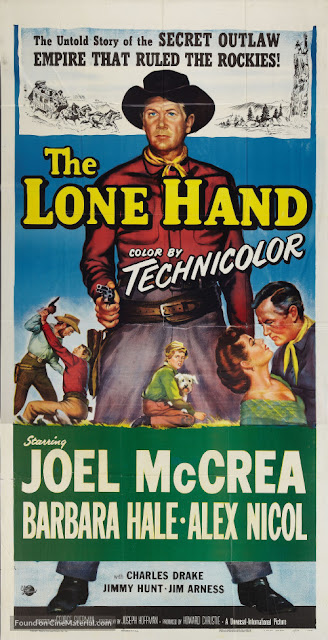