The Invaders dates from the time when Francis Ford (left), John’s elder and at that time far more famous brother, was working with Thomas H Ince (below right) at Inceville, near Santa Monica. Ince was doing very well with his one- and two-reel Westerns, so well that in order to expand production he split his company into two and put Frank Ford, then 31, in charge of the new unit.


Ince was something of a control freak, however, and also wanted to hog the credit, so it was his name that appeared on the screen, not Frank’s. But it is clear now that the majority of the work on this particular movie was Ford’s. 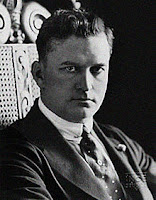 The 41-minute, three-reel film is remarkably sophisticated for 1912. (3-reel movies were considered feature films in those days). As was usually the case with Ford, the characters look weather-beaten and the settings are dusty landscapes. Smoke is used effectively in the battle scenes. There is an authentic tinge to it all, helped by the acting which, for the day, was restrained and unmelodramatic. The plot centers on a fight between the US Army and the Sioux, and actual Oglala performers were used. The story has a fairly pro-Indian line (the whites break a treaty and the Sioux fight back). Of course in 1912 these treaties and Indian wars were very much in living memory. These early Westerns were not so much historical documents as comments on current affairs. 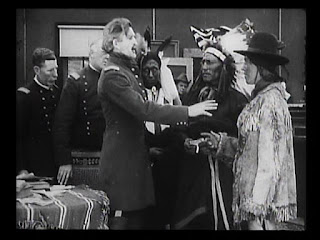 Ford himself plays the heroic Army colonel (left) who, in the fort, holds off the Sioux and their Cheyenne allies against all the odds while the brave young Lieutenant White (Ray Myers) rides off to a neighboring post for help. Of course the colonel has a pretty daughter (Ethel Grandin) for whom the young lieutenant has fallen, and this was fast to become a Western movie trope – in John Ford’s cavalry Westerns in particular.


Parallel to this is the romance between the Sioux chief’s daughter (Ann Little, a white actress but said to have Sioux ancestry) who defies her father by loving a handsome white (uncredited) surveyor  rather than an equally uncredited Sioux brave who offers horses for her. This is perhaps a bit 'safe' but it humanizes the Indians in the eyes of an audience used to being shown bloodthirsty savages halting the path of progress. 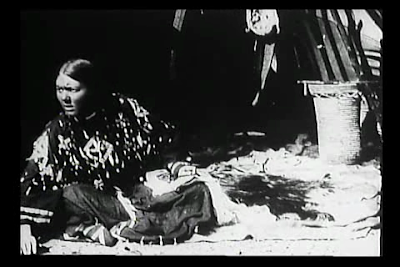 Ann Little as the Sioux chief's daughter
As the situation looks hopeless, the colonel turns his revolver on his daughter in order to spare her a fate worse than death with, er, death. But of course at the last moment, before he can pull the trigger, the US Cavalry relief force arrives in what would become a classic tradition, and the daughter is saved, as is the fort. John Ford was to use this idea (as he re-used so many of his brother’s devices, though hated to be reminded of the fact) in Stagecoach in 1939, when gambler Hatfield brings his silver pistol to the head of Mrs. Mallory, and Cecil B DeMille, an admirer of John Ford, was to copy him the same year in Union Pacific when Joel McCrea looks as though he will shoot Barbara Stanwyck. All the dames are saved by a deus very ex machina.

A much copied plot device
In only forty-odd minutes and with no words (and very few intertitle cards) a complete and believable story unfolds, characters are developed, there is an action climax and the issue is resolved as the whites vanquish the Indians, who meet their tragic fate. It’s masterly. 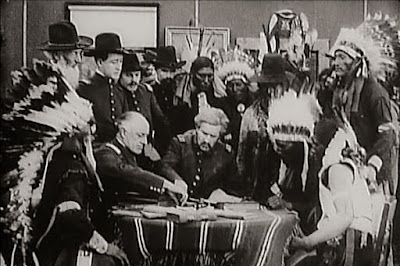 In the opening scene a treaty is signed

Movies were evolving incredibly rapidly at the time and already in 1912, with Ince and Ford involved, they were really quite sophisticated. Another Ince/Ford work of the same year, Custer’s Last Fight (review coming soon) was good enough to be re-released in 1925 and hold its own as a film. It’s a real compliment to its quality. I’m quite sure DW Griffith had seen The Invaders before he made The Battle of Elderbush Gulch. Scott Eyman, in his excellent biography of John Ford says that "Frank’s exteriors are superb, the full equal of the work his brother, not to mention William S Hart, would be doing in a few years." And he adds that ”Some of Francis’s films for Ince were so good that DW Griffith followed dutifully in their footsteps.”

To be seen. There are goodish quality prints on YouTube. 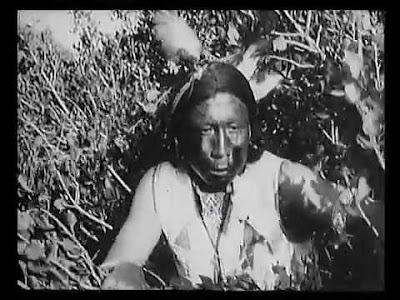