The Hawk, re-released by Jay-Dee-Kay Productions in 1939 as Trail of the Hawk, was an unexceptional and unexceptionable 55-minute second feature. It is only really interesting as the first Western directed by Edward Dymtryk.

Canadian-born Dymtryk (left) was best known for his films noirs and was Oscar-nominated for Crossfire in 1947, the first B-movie to receive a Best Picture nomination. He only made five Westerns (six if you count Raintree County) but among them were Broken Lance, Warlock and Alvarez Kelly, so he was a figure in the history of the Western movie.


The Hawk has a standard plot. The trusted foreman of a Nevada ranch, Jeff Murdock (Rollo Dix) is really the Hawk, a feared rustler. One day a young drifter arrives at the ranch giving his name as Jay Price (Yancey Lane) but he is really Jack King, the long lost son of the ranch owner Jim King (Lafe McKee). Mr. King Sr. has a pretty adopted daughter, Betty (Betty Jordan) on whom foreman Murdock has designs but for whom the handsome young stranger will fall. The hero foils the rustlers, is recognized by dad, gets the girl, and they all live happily ever after, The End. 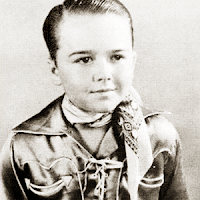 The film is perhaps also notable for the appearance of Dickie Jones (right). Only eight but already in his eighth movie, young Texan Dickie was a child prodigy as an equestrian, billed at the age of four as the World's Youngest Trick Rider and Trick Roper. He was a chirpy, lively lad and he has quite a big part in The Hawk, as Betty’s naughty brother, including a part where he has a shooting contest with the hero and bests him with his slingshot.


But the picture is unremarkable otherwise. Yancey Lane, aka Bruce Lane, was a non-star. He only appeared in a couple of B-Westerns in the mid-30s and soon disappeared from the scene. The other actors were also pretty well nonentities. There is a comic Italian cook (Don Orlando) and the hero’s brave German Shepherd Zandra (Zanda) aids the small boy and the hero in foiling the dastardly Hawk. 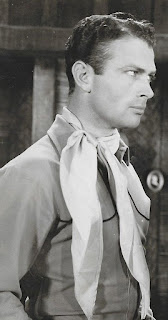 Yancey/Bruce Lane
Don’t get me wrong. You could watch it. It’s no worse than many juvenile Westerns of the period. But you certainly wouldn’t know it was a Dmytryk picture unless you saw the credits. 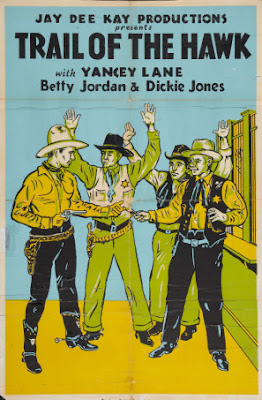