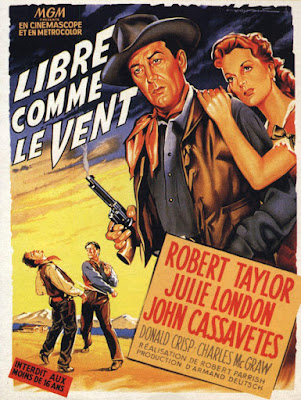 Made in 1957, released in 1958, Saddle the Wind is a late-ish Robert Taylor Western in CinemaScope and Metrocolor, with Elmer Bernstein music, which has quite a lot going for it.


I am a bit of a fan of Robert Taylor in oaters. He was good in them. He grew up on the plains of Nebraska, rode well, loved the West and always wanted to be in Westerns. He had been Billy the Kid in 1941 but really started to concentrate on our noble genre in the 1950s. In the early 50s Westerns like Devil’s Doorway, Ambush and Westward the Women were seriously good. There followed Ride, Vaquero!, Many Rivers to Cross (weak, and barely a Western at all), and The Last Hunt. At the end of the decade we had The Law and Jake Wade, Saddle the Wind and The Hangman (Taylor's first non-MGM Western). It was a top-class Western CV. In Saddle the Wind he was already looking more than his age, not as bad as in some of his 60s Westerns, like Cattle King, but still he aged prematurely. He was a chain smoker who would die from lung cancer; maybe the signs were already there. Still, he does tough rancher very well, and ‘man with a past’ too, and Saddle the Wind allowed for both of these. 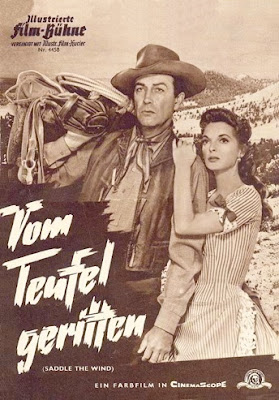 I also like Julie London. Ms. London was in several Western TV shows and six feature-film oaters, and rather good in them. She starred opposite Robert Mitchum in The Wonderful Country, also directed by Robert Parrish, and was memorable too, for me, in Tap Roots and, especially, Man of the West. I think she was a much better actress than many gave her credit for. Some of the long, silent looks she gives say much. She had a ‘strong’ face and was rather a handsome woman than a softly pretty one. She also had a lovely singing voice, which she puts to good effect in Saddle the Wind by softly singing the title song again during the movie to John Cassavetes. She plays an unsmiling saloon girl whom wild younger brother Tony Sinclair (Cassavetes) brings home to the ranch and plans to marry. As he hasn’t warned his older brother Steve (Taylor), her welcome is, not surprisingly, a tad uncertain. The ranch foreman says that maybe the woman will settle the kid down. “Not this woman,” says Steve. “Not this kid.” The omens are not good.


This is very much a story of fraternal rivalry. The basic idea is that Steve Sinclair is a reformed gunfighter, a lightning-fast killer who has hung up his irons and wants to ranch in peace. He is against violence, and in fact doesn't shoot a gun in the whole movie. His young brother (Cassavetes was eighteen years younger than Taylor) is full of vim ‘n’ vinegar and fancies himself as the gunfighter his bro was. He thinks that Steve’s current reluctance to shoot and ask questions later is either cowardice or decrepitude or maybe both. It’s not the first time such a plot was used but it is pretty well handled.

Intense - and growing -sibling rivalry
There’s an even bigger rancher than Steve is, Deneen, who owns two thirds of the valley, with Steve having the other third. Everyone seems to respect Deneen mightily and he is a kind of patriarch. He’s played by Donald Crisp, a John Ford favorite who was, in my view, too posh and English for Westerns. He just about gets away with it as a lordly valley owner. It was in fact Crisp’s last Western. Like Steve, Deneen is against guns and killing, and when the hotheaded Tony manages (more by luck than skill) to kill a gunslinger who had come looking for Steve, in the saloon, Deneen is rather cross. The gunslinger proved himself to be an odious bully in the opening sequence of the film so the viewer has little sympathy for him, but when Tony laughingly and callously treats his pals to celebratory drinks at the bar, with the corpse still lying on the saloon floor, our sympathies switch and Tony becomes the bad guy.


Good news, though: Deneen’s foreman is Ray Teal. Sadly he has too small a part but still, it’s Ray alright.


There’s the old-as-the-hills plot of big rancher vs. small homesteader. The farmers want to put up wire while the rich ranchers want to keep the range open. The symbolic opposition homesteader is the half-crazed Civil War veteran Ellison, played, very well, by good old Royal Dano. He has come out with his clan in a wagon train and intends to fence off and farm land right in the middle of the valley. Steve is polite but firm: no way, he says. He tells them to leave by the next day and rides away. Then drunken Tony rides down on the settlers’ camp and havoc is the result. Principled Deneen lines up alongside the farmer. Tony kills Ellison in town. The crisis nears.

Royal Dano, very good
In town there are scruffy urchins, the costumes are dirty, we see a scythe hanging. The town is roughly built and in the scenery is slightly Shane-like. It’s well done and authentic. Visually the film is attractive: Colorado locations were nicely shot by pioneer George J Folsey, who had started with Lasky in 1914 and who has the distinction of being nominated for thirteen Oscars and winning nary a one. However, the picture is marred by MGM’s annoying habit of doing longshots on location but close-ups on a sound stage with back projection of the scenery. If it had been technically better and seamless it would have been OK but it’s glaring, and the constant flitting from location to studio in the same scene is distracting.

Verging on the kitsch but attractive
Director Robert Parrish was a child actor who became a sound man (he worked for John Ford on Stagecoach and Drums Along the Mohawk), then an Oscar-winning editor, then a director. He did not specialize in Westerns by any means but he did direct Robert Mitchum in The Wonderful Country, and he stood in when Nicholas Ray was ill on The Lusty Men, with Mitch again. His best (in fact, only) work as sole director of a ‘proper’ Western was Saddle the Wind. He does a good job, I must say. 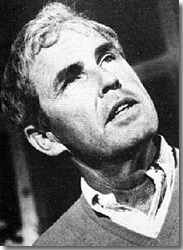 Robert Parrish
I say ‘sole’ director: in fact John Sturges directed parts of the movie. I don’t know the story here, whether Sturges replaced Parrish or vice versa. Perhaps a reader knows and can tell us by leaving a comment. One commentator has said that Sturges just re-shot a few scenes in the studio because MGM was afraid that Robert Taylor was looking too old under the Colorado sun, but I don’t know.

Almost Shane-ish
The script has its moments, such as the extended metaphor of leather (if you watch it you’ll see what I mean). It was by Rod Sterling (who would do The Twlilight Zone the following year but whose only Western movie this was) and Daniel Fuchs (again, his only Western) from a Thomas Thompson story. Thompson was a very experienced TV writer (especially Bonanza and Temple Houston episodes) who only did two big-screen Westerns, both for Robert Taylor. There is a clear anti-violence agenda. The movie is quite talky for a Western so it's good that the screenplay had some quality.

(Melo)dramatic
There’s a hint of overacting here and there and a touch of melodrama. Cassavetes was James Deanishly intense and also dynamic but not entirely natural in a Stetson. It was his only Western movie, and probably just as well.

Crisp has what appears to be a Tunstall-ish death but eventually pulls through so that they can all (except Tony) live happily ever after - though a tougher ending would have been better. The final Steve/Tony showdown is also slightly fluffed.

Still, it’s a big, color Robert Taylor Western and as such is certainly worth a view. 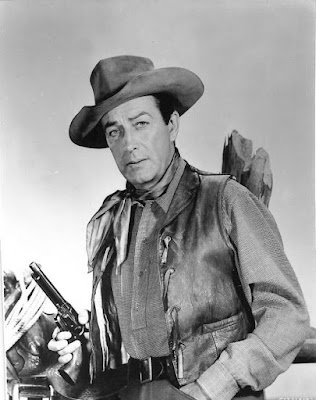