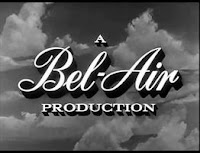 In 1953 (a vintage year for oaters) there were two good, gritty cavalry Westerns filmed in Death Valley. The better of them, certainly, was MGM’s Escape from Fort Bravo, because it was shot by Robert Surtees, directed by John Sturges and starred William Holden. But able to hold up in comparison and with its own merits was the other, War Paint, produced by Howard Koch and Aubrey Schenck, a Bel-Air Productions picture, directed by old hand Lesley Selander and starring Robert Stack. 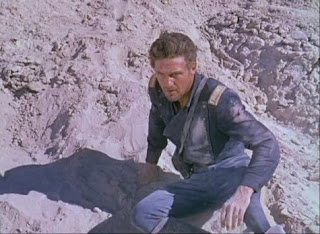 Stack generally avoided Westerns, making only six in his long career, even when, in the 50s, studios were churning them out at a rate of knots and all their stars were expected to climb into the saddle. He didn’t become Eliot Ness until 1959, of course. But he was good in oaters, I think, and it’s a pity he didn’t do more. See for example Badlands of Dakota (1941), his first, or Conquest of Cochise, the same year as War Paint, in which he also played a tough but wise Army officer in the Indian wars. Neither movie was top-drawer but Stack was good in both. 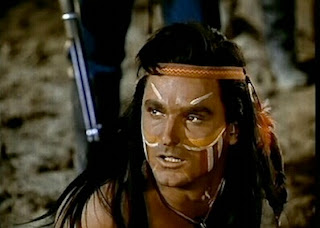 The movie has one of those plots where a statesmanlike Indian chief wants peace but his firebrand son seeks the warpath. That story’s been done to death, of course, but this one is well handled. Lt. Billings (Stack) leads a patrol of ten men on a grueling The Lost Patrol-type journey to deliver the treaty in time to Gray Cloud but little does he know (at first) that his guide, Taslik (Keith Larsen, Brave Eagle on TV) is the firebrand son who will do everything to thwart the mission and cause war. Taslik is aided by his Amazonish sis, Wanima (Joan Taylor), a maid who is very handy with a Winchester, as the opening dramatic scene showed us. 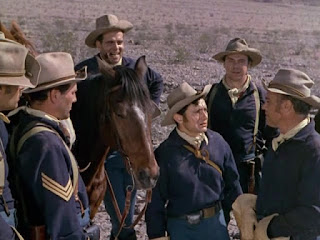 The good news is that among the troopers are Robert J Wilke, John Doucette, Peter Graves, Douglas Kennedy and Charles McGraw. They are all more or less surly but as the ordeal is prolonged (Taslik deliberately leads them to where there is no water) the bad eggs get badder. Peter Graves as Trooper Tolson is especially nasty. Graves was usually a goody but also had quite a useful sideline in bad guys. This was only his second Western in what was to be a very long career in the genre (IMDb credits him with appearances in 180, from 1951 to 1969). It’s one of those movies in which the members of the party get picked off one by one, till there’s only badman Graves and hero Stack left, so they can have a showdown fight. No prizes for guessing who will win. 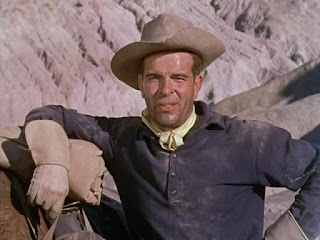 Doucette, whom I always like seeing in Westerns, was another who had a long and worthy career in the genre, appearing in 200 big- and small-screen oaters, from Station West in 1948 to an episode of How the West Was Won in 1979. Respect. In War Paint he plays the Pole Charnofsky with a squeezebox, with quite a good accent, in fact. Gravelly-voiced Charles McGraw, eternally, it seemed, a dogged cop or soldier, here in only his fourth Western, plays the loyal, tough (not to say dogged) Sergeant Clarke who backs up the lieutenant. Good old Bob Wilke was of course the heavy in Western after Western, one of my heroes, and he was very well cast here as the boorish bully Trooper Grady. As for Kennedy, Trooper Clancy, he bravely volunteers for a rescue mission but is bushwhacked by the deadly Wanima. He was soon to become Steve Donovan, Western Marshal on TV but he did a lot of big-screen Westerns too with (usually small) parts, from North West Mounted Police in 1940 onwards. Also in the troop were Charles Nolte as the corporal who dies of thirst, and Paul Richards, James Parnell and Walter Reed as troopers. They all fall, one by pitiless one.

There’s a message, of sorts, namely that peace might well fail but they have to try, and the alternative is endless people dying on both sides. Even the homicidal Wanima comes round to that view. 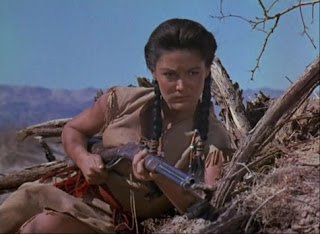 Mean shot with a Winchester
The Pathécolor is bright, the terrain shot by DP Gordon Avil brutally arid and harsh, the almost Star Wars-y music (Arthur Lang and Emil Newman) underlines the threat and hardship, director Selander keeps up the tension (and this was only one of five flicks he directed that year), and the whole thing is acted well enough to pass muster as a decent Western. It’s tough and economical. Characters develop. 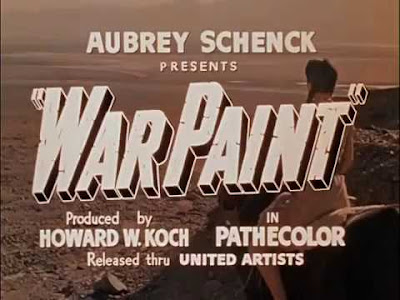