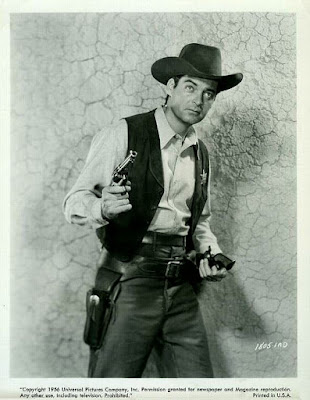 Rory Calhoun’s seventeenth Western (the ninth as lead) was a black & white Columbia B-movie but it was really rather good. It most definitely repays a watch, even for those who are not dyed-in-the-wool Rory fans. I recommend it.


The plot is pretty standard (brave small rancher against ruthless land-grabber) but it’s well done and both acting and writing stand out as above average.


It was directed by actor/producer/director Fred F Sears. He had started in front of the cameras as sidekick in low-budget Westerns but graduated to directing Columbia’s Durango Kid series starring Charles Starrett. He was one of those directors who reliably brought in pictures on time and on budget, which of course endeared him greatly to studio heads. His best film is generally regarded to be the sci-fi cult classic Earth vs. Flying Saucers, the year before Utah Blaine, but he also directed some (slightly) classier Westerns such as The Nebraskan and Ambush at Tomahawk Gap. He wasn’t a Poverty Row z-movie man. The direction of Utah Blaine is pacey and quite suspenseful here and there. 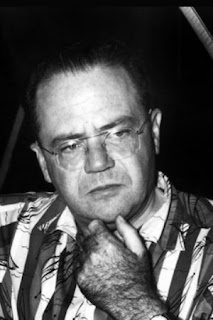 Fred F Sears
Utah Blaine is helped by being a Louis L’Amour story (his ninth novel, 1954), well adapted for the screen by Robert E Kent. Kent was very experienced: this was the fourteenth of thirty B-Westerns he wrote. 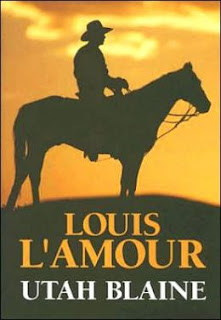 The 1954 novel
In the opening scene, somewhere (we presume) in Texas, Rory, a well-known gunslinger back from a Mexican revolution, sees some vigilante thugs casually hang a man, and when they callously leave him dangling to strangle to death Utah Blaine (for it is he) cuts the unfortunate fellow down and saves his life. The man with a sore neck turns out to be rancher Joe Neal (Ken Christy, a notably good actor) whose spread, the 46 Connected, is being seized by unscrupulous and brutal Russ Nevers, who wants the whole valley – you know how they do. The really good news is that the ruthless rancher Nevers is played by one of my favorites, Ray Teal, always reliable as solid sheriff or ruthless rancher, whatever the part called for. 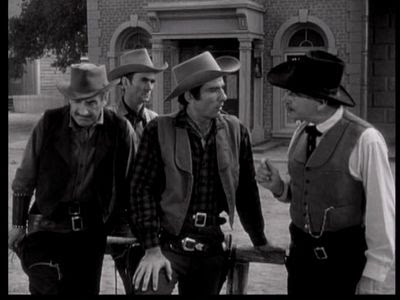 The bad guys. Ruthless rancher Ray Teal (right) orders thug henchman George Keymas to do the dirty on hero Rory
Unusually, in his first scene Rory has neither horse, gun nor hat. It's very rare to see a Western hero without those. But he soon straps on a fancy two-gun rig (a rather cool one, actually, that he used in several movies, such as Red Sundown, for example). One of the reasons Rory has come back is to get revenge on gunhand Rink Witter (George Keymas with an odd accent) – for a never really defined reason, though we know Rink had done the dirty on Utah. Rink is now a chief henchman of Nevers, so Utah, whom Joe Neal has appointed manager, has all the more reason to go for him.


So plenty of skullduggery and ruthless ranchery, with courageous resistance to the bullies. Rory pals up with a big ox, Gus (Max Baer) and an old pal with a shotgun he calls Matilda, Rip Coker (Paul Langton) and together they take on the might of Nevers’s hired guns. So it’s all set up for mucho action.

Naturally there are two dames. There's a plucky rancher, Angie (Susan Cummings, left, a regular of TV Western shows), whose dad has been murdered (by Rink) just like Joe Neal but she is determined to carry on, and though she at first dislikes Rory as a professional gunslinger, we know perfectly well that she’ll come round and it’ll be true lerve in the last reel. Then there’s a posher rancher lady, Miss Blake (Angela Stevens, George Montgomery’s leading lady in Jack McCall, Desperado). Rory goes for Angie and sidekick Rip takes a shine to Miss Blake, so that’s alright. The standard pattern was to have a demure, respectable lady and a slightly racier dame, maybe a saloon gal, but this time they are both rancheresses. 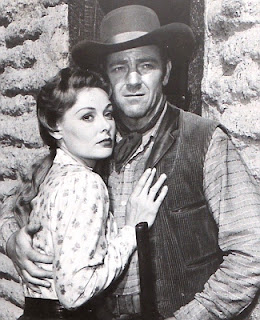 
There’s a proper action climax, with Ray leading his thugs in at the gallop, in a scene that reminded me of Forty Guns (the same year) and much blazing away. You may guess the outcome.


All good stuff. You could certainly see this one. 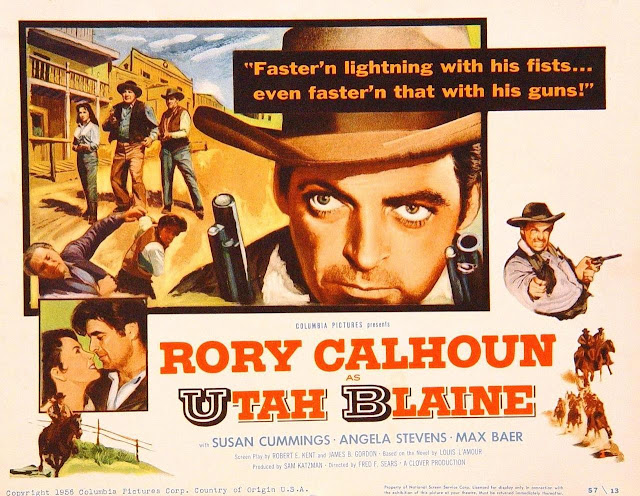