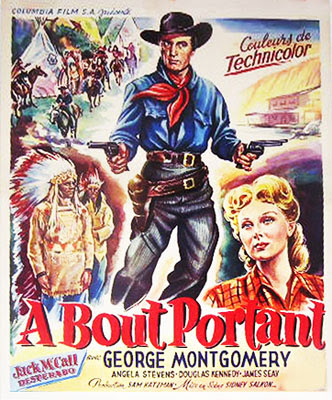 This Christmastide, let us reflect that in the 953rd year of the 2nd millennium, the 53rd year of the 20th century, and the 4th year of the 1950s decade, the year 壬辰年 (Water Dragon) was giving way to 癸巳年 (Water Snake), while Queen Elizabeth was being crowned, Stalin was dying, Sir Winston Churchill was being awarded the Nobel prize for Literature, Watson and Crick were discovering DNA, Jonas Salk was announcing his polio vaccine, Ian Fleming was writing Casino Royale, Frank Sinatra and Nelson Riddle were recording at Capitol Records, Everest was being conquered, the Rosenbergs were languishing on death row, Jack Kennedy was marrying Jaqueline Bouvier, Hugh Heffner was putting together the first issue of Playboy and George Stevens was directing Shane, it is refreshing to know that in the real world the likes of Sam Katzman were producing B-Westerns of the quality of Jack McCall, Desperado.


Mr. Katzman excelled, even by Hollywood B-Western standards, in twisting history into the jaw-droppingly mad. He was ahead of the time – for 1953 was also the year of Waiting for Godot and the theatre of the absurd was only just beginning.


In virtually all movies featuring Jack McCall, assassin of Wild Bill Hickok in 1876, McCall is a runty bad guy. Hollywood may have invented more or less understandable motives for his deed, but they rarely actually made him the goody. But in the 1950s there was a bit of an anti-Hickok movement (see, for example, I Killed Wild Bill Hickok) and in Katzman’s production Hickok was a scheming and murderous crooked politician while McCall was a war hero fighting courageously to reclaim his family honor and good name. Well, OK, why not? We don’t watch Westerns for documentary history, after all. We can still sit back and enjoy. 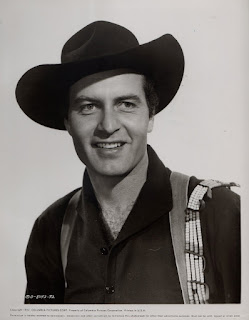 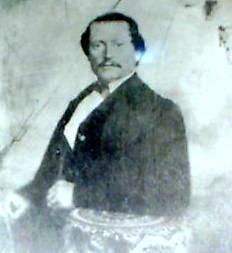 Jack McCall as Jack McCall
So forget history. Slot the DVD in, turn on your new wide-screen TV and marvel.


You’ll see a Technicolor extravaganza rich in action even by the standards of the genre. There are endless prison breaks, shoot-outs, battles with Indians, stage hold-ups (there’s even an instance of grand theft stagecoach) and Western derring-do of all kinds. Sidney Salkow may not have been John Ford but boy, could he cram in the action scenes. From a Bing Crosby singing Western in 1936 to The Great Sioux Massacre in 1965, via vast numbers of TV shows (especially Fury) and several B-Westerns starring George Montgomery, Salkow 'did' Western action. Salkow (below right) and Katzman (below left) were made for each other. 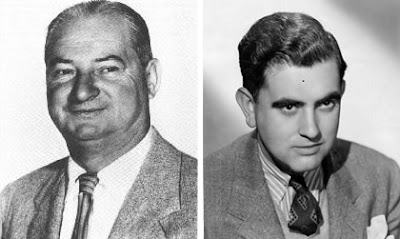 But I suppose some of the ‘credit’ ought also to go to Rin Tin Tin writer John O’Dea, who wrote the screenplay from a story by novelist David Chandler, for they came up with a plot so ludicrous it’s fun. How the actors delivered the lines with a straight face it’s is hard to say.


It all starts with McCall shooting Wild Bill Hickok (Douglas Kennedy, aka Steve Donovan, Western Marshal) in a Deadwood saloon (one of those Hollywood saloons we all love), face to face and not in the back, in a quick-draw contest. Hickok is wearing a star because he is ‘marshal of Deadwood City’. Then we see McCall’s trial and as he tells his story it all goes blurry (you know how they do) and the vast majority of the movie is a flashback. It starts in the Civil War when Union Army Private McCall volunteers for a dangerous mission but is unjustly taken for a Reb spy and court martialed. Naturally, he escapes (this is a very good bit because he manages it by making a newspaper cutout of a hanging man and projecting the image onto the wall with a candle) and he rides off to his Southern mansion (for the McCalls are rich plantation owners with loyal Negro slaves/servants). Sergeant Hickok and honest Jack’s evil cousin Bat McCall catch up with Jack and then murder his parents, and Jack meets up with the future Mrs. McCall, Rose (Angela Stevens, the posh rancher lady in Utah Blaine), whom he gallantly helps. From there on (and we are still in the first reel) it only gets more preposterous.


Jay Silverheels is Red Cloud, statesmanlike chief of the Sioux, beguiled by crooked Hickok who wants his lands for the goldfields. Red Cloud’s son is Gray Eagle (Eugene Iglesias) who is a firebrand and wants the warpath, until reprimanded by his wife (Alva Marie Lacy), when he effectively says Yes, dear and behaves better.


Montgomery recites his lines in the usual wooden way (I always think he sounds like Clayton Moore). Kennedy has a rather dashing mustache.


There’s gun running and a massacre of Indians orchestrated by the evil Hickok and heaven knows what else. Brave McCall saves the day and escapes again and again, sometimes with the help of Rose. The bad guys are polished off. It’s all good stuff. Until finally we get the showdown in the saloon and Wild Bill meets his doom. Once they have heard all this the jury naturally acquit, Jack marries Rose and they return to the Southern mansion and loyal Negroes and live happily ever after and Jack is never hanged in Yankton, for of course he was the goody all along, not Wild Bill.


There are some very nice Iverson Ranch locations shot in bright Technicolor by Western regular Henry Freulich. The music was by Mischa Bakaleinikoff, who could do very old-fashioned stuff but this time I thought it was rather good, especially in the Civil War bits.


This movie is terrific entertainment and I heartily recommend this epic film to your attention. I hope Santa brings you a copy, and I also wish you, dear e-pards, all the fun of the festive season.