Another Hollywood hero brings in Geronimo 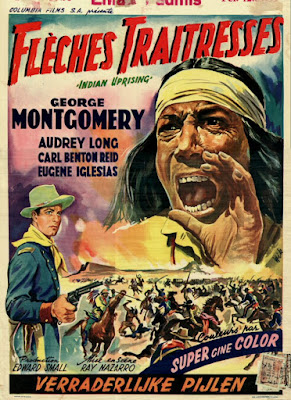 I own to being not the greatest fan of George Montgomery in Westerns. He never really convinced in the genre, in my view. But I must say that Indian Uprising was one of his better efforts. He comes across as a tough captain in an Arizona cavalry Western.


The movie is derivative and clichéd. Written by Kenneth Gamet (who wrote a lot of Randolph Scott Westerns, including the high quality Coroner Creek) and Richard Schayer (who wrote silent Westerns as far back as 1919) and directed by old stager Ray Nazarro, who churned out Westerns for Columbia for years and years, the picture owes more than a little to Fort Apache and Broken Arrow. It’s a Geronimo story rather than a Cochise one but in other respects has the same plot. In fact Geronimo is played by Miguel Inclán, who was Cochise for John Ford on Fort Apache.


Many of the well-known, not to say hackneyed plot elements are present. Capt. McCloud (Montgomery) is the man-who-knows-Indians, sneered at as an “Indian lover” by white townsfolk goaded on by crooks with commercial interests. He and Geronimo have a mutual respect and seek to make a fair treaty but McCloud is undermined by the crooks, in league with scheming venal politicians back in DC (where the story opens). A new by-the-book martinet officer (Robert Shayne) arrives from the East and, ignoring the advice of experienced and canny Captain York-ish McCloud, gets his men massacred, like Col. Thursday. 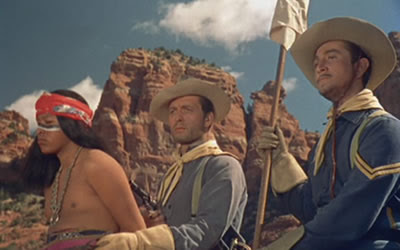 Tough Capt. Montgomery is nice to Apache kid
Sadly, Mr. Nazarro was no Ford, or Delmer Daves, and the whole thing has an air of B-Western about it. Some of the script and acting is distinctly iffy. Still, it’s shot (by Ellis W Carter, who did a lot of B and TV Westerns) in nice Technicolor in attractive and appropriate Sedona locations. And to be fair, Nazarro was quite good at the action scenes.


It was a Bernard and Edward Small production but sadly by ’52 they had abandoned their amusing introductory logo of a massive plinth with a giant SMALL atop it.


McCloud is decent to Geronimo’s young son (Robert Dover) and the boy becomes an ally. Of course being nice to children or animals in the first reel was Hollywood semiotics for good guy.


The picture suffers a little from not having sufficiently nasty bad guys. It really needed Victor Jory, maybe, or Lyle Bettger to be the crooked town boss and perhaps Robert J Wilke or Leo Gordon as henchman. But we only got Hugh Sanders as the slimy boss and Douglas Kennedy as the thug. They were a bit a bland.


There are the usual clichéd Irish sergeants (Joe Sawyer and John Call) to provide an element of comic relief, and an old-timer miner, Sagebrush (Eddy Waller), who will strike it rich on Apache lands but then be murdered by the slimy town boss. They shoot him in the back with an arrow to put the blame on the Apaches but they use an Arapaho arrow. Doh. 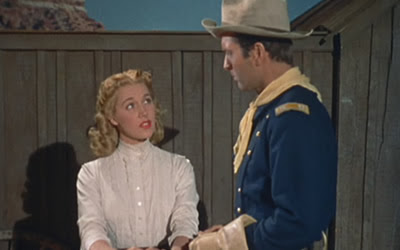 Perfunctory at best
The love interest for Montgomery is perfunctory at best. It’s a pro-Indian schoolma’am (of course) played by Audrey Long, Mrs. Leslie Charteris of The Saint fame, in her final film. But she has little to say or do except be lovey-dovey in the last reel. 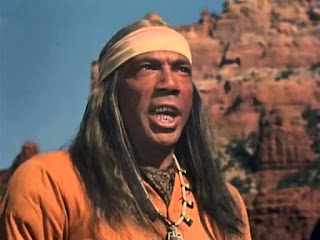 Geronimo is described by McCloud as “head chief of all the Apache tribes” so McCloud wasn’t the man-who-knew-Indians-all-that-well. Unusually for such movies, there’s no firebrand Indian who wants the warpath to counterbalance Geronimo’s statesmanlike wisdom. But then traditionally for Hollywood it was Geronimo who was the warlike one (and Cochise the statesman). Inclán (right) joined the long list of Geronimo actors that went back to Chief Thundercloud in 1939 and included John War Eagle, Chief Yowlachie, Jay Silverheels (three times), Monte Blue and Chuck Connors, among others.


I’m a sucker for Apache stories so I enjoyed Indian Uprising. I wouldn’t pretend that it’s a great classic of the genre or anything but it has its moments. You could watch it. It was certainly a great deal better than Conquest of Cochise the following year.