Only marginally a Western (for 18th century musket-and-tricorn frontier flicks are really a genre on their own), Fort Ti is also a rather weak picture, and I hummed and hahed whether to review it at all. But I sat through it so I thought I might as well. It does have hostile Indians and the hero does what a man’s gotta do, so it’s vaguely Western anyway. 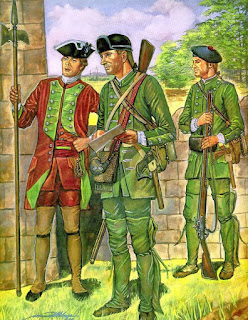 It’s a Rogers’ Rangers story. Rogers' Rangers (the apostrophe is usually rendered in this way) were initially a provincial company from the colony of New Hampshire, and they were attached to the regular British Army during the French and Indian War (called the Seven Years War in Europe). The unit was trained by Major Robert Rogers (1731-95) as a rapidly-deployed light infantry force tasked mainly with reconnaissance as well as conducting special operations against distant targets. This made them ideal for Hollywood for, though not too American, they could be daring and unconventional and bold. Kenneth Roberts’s 1937 novel Northwest Passage was made into a very poor movie entitled North West Passage, Book 1 – Rogers’ Rangers in 1940, directed by King Vidor and starring Spencer Tracy as Rogers. It became a TV show in 1959. I'm afraid Fort Ti did little to add to the Rangers' screen glory. 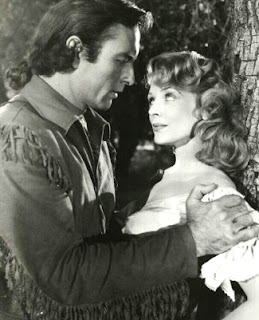 The hero of the 1953 effort was George Montgomery (right, with co-star Joan Vohs), rather going through the motions (he appears to be reading his lines from cards at one point). Montgomery was never very good in Westerns, I thought, and still less so in early frontier tales, of which he did several (Ten Gentlemen from West Point, The Iroquois Trail, Davy Crockett, Indian Scout (though that one was bizarrely set in 1848) and The Pathfinder). He looks frankly silly in his green Rangers uniform (as did Tracy and his fellows thirteen years before): he seems to have strayed out of a Robin Hood movie.


To make matters worse, it was a Sam Katzman/William Castle effort. Producer Katzman and director Castle made a whole series of pretty crummy B-movies, many of them schlock horror flicks, and the Westerns they did were historically absurd even by Hollywood B-movie standards. There is one hilariously bad scene in Fort Ti when the good guys take refuge in a cave and the Katzman/Castle plastic bats on wires from one of their horror movies ‘fly’ clumsily out. 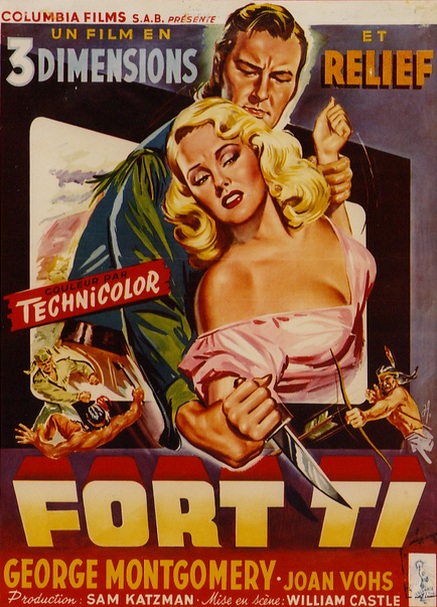 He looks more like John Wayne than Geo Montgomery. Great poster, though.
1953 (the year of House of Wax) was the year of a short-lived 3D craze. Many producers and directors exploited the possibilities subtly but no one would ever accuse Katzman and Castle of subtlety. Every possible opportunity is seized upon to lunge at the camera with knives or burning brands, and to shoot muskets into the audience’s faces. Of course then as now most would have seen it in 2D, so it all looks ridiculous.


It’s 1759 in upstate New York. The story is centered on Fort Ticonderoga (abbreviated in the title). Howard Petrie is Major Rogers, trying to be imposing and authoritative, and Capt. Horn (Montgomery)’s sidekick is the comic-relief Sergeant Monday Wash (Irving Bacon, clearly having fun), fond of a drop and hamming it up. General Montcalm is there (Alphonse Martell). The ‘French’ actors speak bad French and the ‘English’ ones bad Cockney. There are two dames, Fortune Mallory (Joan Vohs), a mysterious and glamourous lady who may be a French spy, and a rather jealous Indian maiden, Running Otter (Phyllis Fowler). Which will win the hand of brave George? Yawn, who cares. 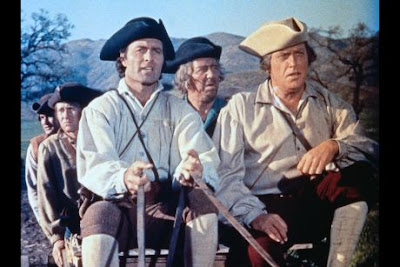 Not a Western
The cast is undistinguished but the Robert E Kent script would be difficult to deliver convincingly even if Laurence Olivier were in the company.


Still, as reader John Knight said in a comment posted to the review of another Castle/Katzman picture, Conquest of Cochise, these films did have a certain “cheesy appeal”, and though you shake your head at their absurdity and clunkiness, you do find yourself (or John and I do anyway) smiling quite fondly at them as well.