Finger on the Trigger (Films Internacionales/AA, 1965) 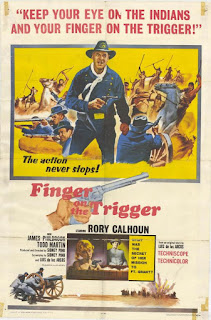 In 1965 Rory Calhoun led in three big-screen Westerns. He was nearing the end of his career: he would make a comeback to lead in one more, Mule Feathers, in 1977 and would do a few bit parts and walk-ons in a couple of others (one of them a country music Western in 1992, when he was 70, just five years before he died) and some TV shows. But really 1965 was pretty well the end of the trail.


I found Finger on the Trigger on YouTube and happily sat down to watch it but my suspicions were immediately aroused when in the very opening scene we heard over-loud clip-clops dubbed onto the soundtrack and background music of electric guitar. Yup, it’s a spaghetti western. Also known as Blue Lightning, Le chemin de l’or, Il sentiero dell’oro and, what came up on the screen of the print I saw, and closer to the English title, El dedo en el gatillo. Call it what you will, it's a pulp Eurowestern. 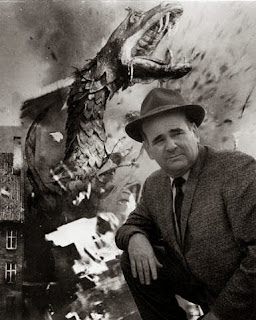 Yup, Rory too did a fin-de-carrière spaghetti. Or at least a paella western, for this one was made by a Spanish company, written by Luis de los Aros and shot in Spain. At least the director was American, Sidney W Pink (1916 – 2002), a producer and writer known for schlock sci-fi B-pictures, many in 3D, who is said to have discovered Dustin Hoffmann. Pink (right - he's the one in the foreground) lived in Madrid for a time and got heavily into spaghetti/paella oaters.


This review will therefore be short. I don’t do spaghettis as a rule. As a lifelong lover of true Westerns I find the spaghetti kind generally disrespectful of the genre, and dreadfully badly written, directed, acted, and produced, with the worst music ever.


Still, it is Rory, so we owe him at least one watch of the movie. It’s a story set just after Appomattox (so they all have 1870s and 80s clothes and guns, obviously) in which two troops of ex-soldiers, or soon to be ex-soldiers, Union and Confederate (the latter in very unconvincing gray uniforms) are after some Confederate gold. Rory is the bluecoat captain. But both parties are riven: members of each group want to keep the gold for themselves, whereas their captains and a few loyal men want it to go to their respective governments, in Washington DC and in exile in Mexico respectively. That’s basically the plot.

The aging Calhoun (left) had an almost George Clooney look to him, and he does the usual solid job as the decent but tough soldier, despite the ropey script and some very iffy acting going on around him. James Philbrook plays Calhoun’s Confederate counterpart. Philbrook had co-starred with Rory in an episode of The Texan but was usually confined to small or even uncredited parts in Westerns. Many of the rest of the cast were locally-recruited Spaniards.


All in all this movie is a low-grade Eurowestern with little to recommend it. You might want to watch it once for the curiosity value. It scraped up to a two-revolver rating because of Rory. 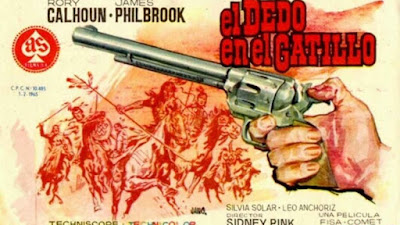