Harry Sherman Productions made over seventy movies, mostly Westerns, from 1918 to 1954. My favorite was the charming Four Faces West in 1948 but the biggest claim to fame of 'Pop' Sherman (left) was the introduction of Hopalong Cassidy to the screen. Like John Ford he had his own ‘stock company’ of actors who appeared again and again in his productions, among them Richard Dix, Albert Dekker, Lee J Cobb and Victor Jory. All of these were present in Sherman’s 1943 picture, released through United Artists, Buckskin Frontier.


The movie is no great shakes really, pretty well a black & white B-Western, but it had a strong cast, more than competent direction from the highly experienced Lesley Selander (especially good at action scenes), some lovely music by Victor Young and David Buttolph, and some classy photography of Oklahoma locations by the great Russell Harlan, of Red River fame. So it gets up to three revolvers in the ratings!

Director Selander
It’s an 1850s railroad picture (though of course they all have 1870s clothes and guns) in which, most unusually, the railroad company is the goody, with bold engineer Stephen Bent (Dix) determined to run the road through Kansas in the teeth of opposition from diehard rich freighter Jeptha Marr (Cobb). Marr can’t stand Bent and would cheerfully see him “off my land or under it”, as he puts it. But it’s complicated because he has a lovely young daughter, Vinnie (second-billed Jane Wyatt) and railroad man Bent is soft on her. 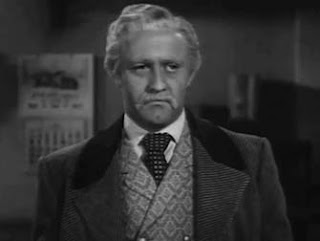 Lee J Cobb as elderly dad
Dix was now into his fifties so didn’t make an entirely convincing young suitor. But never mind. Wyatt herself was 33 by then and Cobb plays her elderly father (“I’m an old man,” he complains to her) but, born in 1911, he was actually a year younger than his ‘daughter’. Oh well. 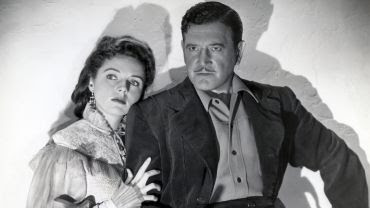 Wyatt and Dix as romantic young couple
I said it was complicated. Well, it’s even more complicated because Marr’s second-in-command, Gideon Skene (Dekker) is in love with Vinnie too and jealous of Bent, whom, however, he can’t help admiring. He disapproves of his boss’s high-handed ways and ruthless determination to stop the railroads. Conflicted, let’s call him. Dekker was to earn undying Western fame for his Harrigan in The Wild Bunch late in life but he had a distinguished career in oaters before that. He’d been a Broadway actor in the 20s and when he went to Hollywood he tended to do handsome tough-guy parts, notably his gang boss in The Killers in 1946, but starting with a Fred MacMurray Western of 1940, Rangers of Fortune, he had several outings in the saddle over the years. He’s good in Buckskin Frontier, mixing toughness and decency.


Then there’s another woman, the rich Rita Molyneaux (Lola Lane) of whom Vinnie is instantly insanely jealous, though Rita's relationship with hero Bent is strictly a business one. Rita starts flirting with Gideon. Yup, it’s a tangled web alright. 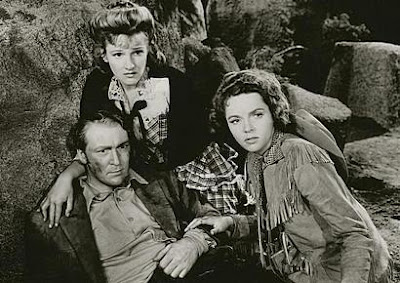 Brave buckskin-clad Dekker with the girl he's soft on and 'the other woman'
Dix of course was a very seasoned performer in the genre. He had been RKO’s leading man since the birth of talkies and 1943 was the year his contract there finally ended. His big frame and deep voice made him an impressive figure and he was even nominated for Best Actor for his part in Cimarron in 1931. He did nineteen Westerns altogether, from the Victor Fleming-directed silent To the Last Man for Paramount, through Cherokee Strip in 1940, his Wyatt Earp in Tombstone, The Town Too Tough to Die in 1942, American Empire the same year and Buckskin Frontier, his penultimate oater (he finished the same year with The Kansan).
There's a Royal Gorge-style railroad war with rival companies battling it out. 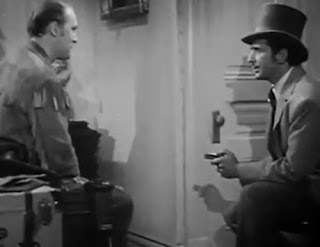 The best thing, though, for me anyway, is that the villain is played by Victor Jory (left). Not only that, he uses a derringer! You know how I love derringers, especially in the hands (or up the sleeves) of no-good gamblers, saloon owners and crooked town bosses. Jory was never less than excellent, nearly always the bad guy and his sinister mien was ideally suited to crooked town bosses in Westerns. In this one he also has a top hat. Superb. Of course he is finally bested by the hero after a fistfight in the rocks. Dix knocks him out in the river and does not trouble to try to save him as he sinks beneath the surface, a fitting end for such a rascal.


The script is curiously prudish, perhaps trying for Victorian authenticity (but if so, failing). At one point the heroine says that she would prefer to walk than take a carriage as she would like to stretch her – that is, take some exercise. 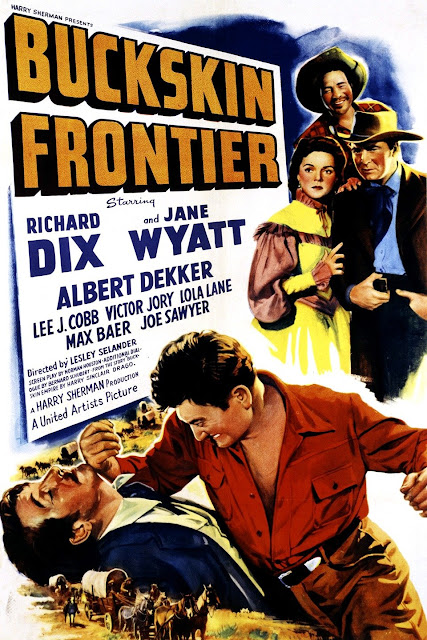 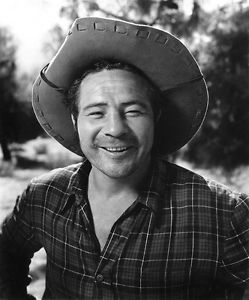 The ending is rather too neat, with bad guy Cobb suddenly converting to railroad man and Dix winning Wyatt’s hand with Cobb’s blessing, but there you go. I enjoyed this picture and recommend it to your attention, e-pards, as long as you are not too demanding, that is.