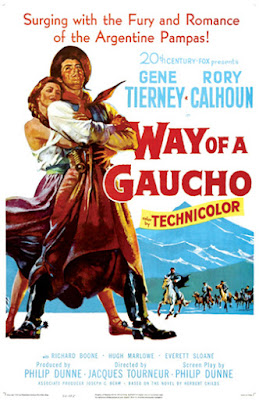 20th Century-Fox deserved credit for taking a cast and crew to Argentina and engaging Jacques Tourneur to direct its Technicolor Way of a Gaucho. They threw budget at it ($2.24m, I believe). And it rewards in the sense that it is attractive, colorful and occasionally even beautiful. In the last resort, though, the plot and tone of the movie are pretty straightforward B-Western – which is why I am reviewing it here. When Rory Calhoun rides the range in a wide-brimmed hat in the 1870s and there are guns and chases and outlaws, it doesn’t really matter if it’s prairie or pampas.


I enjoyed it. Calhoun was occasionally much better than he often got credit for, and here he does a moody doomed gaucho with aplomb. It’s an ‘end-of-the-West’ tale set in a different West. The way of life of the gaucho is in decline. “Foreigners and city men have taken the pampa away,” says gaucho Rory. And later he opines that “Our time is past”. It’s a well-known Western concept. In fact even when ‘proper’ Westerns began it was rife. Read The Virginian and see. The good old ways are dying. The virgin West is falling to Eastern corporate interests and ‘civilization’, darn it. But Rory handles it all well, in an almost Tyrone Power sort of way. Actually, the part was first offered to Power, who turned it down. 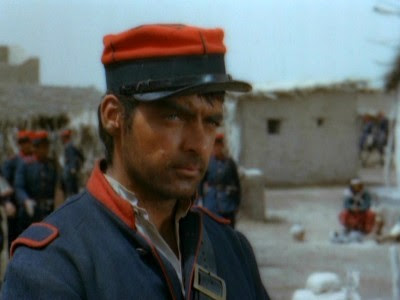 He looks the part too, in his exotic costume and those curious baggy pants. In one scene he stands on his saddle to get a better view over the flat grassland and he could have been posing for National Geographic. 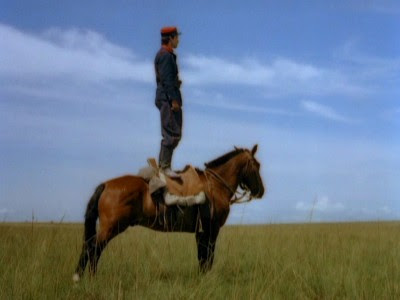 Martín (Rory) gets into a knife fight (as gauchos are wont to do, it seems) and kills his opponent, who has slighted Rory’s patron, the estancia owner Miguel. Thrown into jail, he is allowed to enlist in the militia rather than face trial thanks to the efforts of Don Miguel, who is a deputy to the National Assembly. But in the army he comes up against over-tough officer Major Salinas, and Rory’s rebellious and independent ways do not go down well. Now, the good news is that Don Miguel is played by Hugh Marlowe and Major Salinas by Richard Boone. 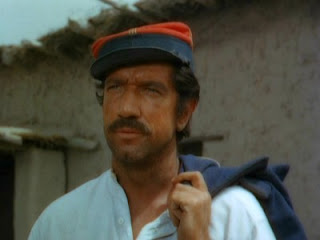 Marlowe was not a Western specialist but in the few he did he was absolutely first class. This one (if Western it be) was only his second but watch him in Fox’s Rawhide of the year before, when he played the outlaw boss; he was superb. Boone (left), of course, is an old favorite and he was always excellent, especially as the bad guy. Here he is a nuanced bad guy, with saving graces, and in fact the sparring enmity/respect the gaucho and major have for each other is very well handled and one of the high points of the movie. It finally comes out as a sort of draw, I guess you'd say. 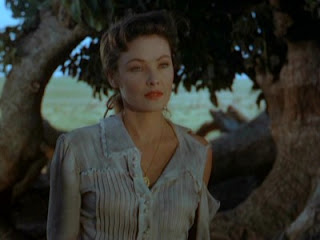 Gene Tierney (right) is the posh dame for whom Rory falls after he has rescued her by killing the Indian who has captured her and was carrying her off. Tierney looked a bit Nordic to be the sultry Teresa Chavez but she was certainly pretty. She had been, of course, Henry Fonda’s amour in Fox’s Fritz Lang-directed The Return of Frank James in 1940, and had also been Belle Starr opposite Randolph Scott the year after, but she only did three proper Westerns and Way of a Gaucho so was hardly a specialist. She rather daringly for 1952 falls pregnant by the gaucho before they are married.


It was both produced and written by Philip Dunne, John Ford alumnus, who adapted the Herbert Childs novel. Dunne had adapted Fenimore Cooper for the 1936 The Last of the Mohicans, the Randolph Scott one, and done it rather well too (it’s a dreadfully turgid book and Dunne managed to distill it down to all the good bits). But he didn’t do Westerns. He doesn’t do a bad job on Gaucho, though. 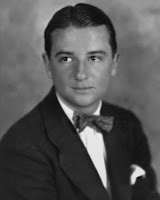 As for director Tourneur (left), he was better known for atmospheric noirs and horror flicks but he’d debuted, Westernwise, with the excellent Canyon Passage, a very classy picture, and had done the semi-Western Stars in My Crown with Joel McCrea two years before Gaucho. He would go on to do Wichita and Stranger on Horseback, both also with McCrea, and he became a good Westernista.

The New York Times was snooty about Calhoun, calling him "sturdy but sullen" but I think he was rather good. The picture was quite a hit and it boosted Rory's screen career.

If you are a purist you probably won’t regard Way of a Gaucho as a Western and will therefore justifiably condemn it as unworthy of your attention. But if you have a slightly broader view of the genre I think you’ll enjoy it. It's actually a well-made picture. 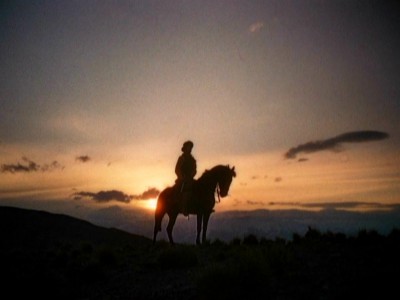