The whip in question is a stage driver’s one that is presented to young Robert Wagner by his role-model Dale Robertson. For this is a stagecoach drama. The kid Jess Harker (third-billed Wagner, 23, in his first Western) drives a two-mule mud-wagon but pines to pilot a flash six-up Concord and is finally given the chance by tough stage line boss James Millican (only 43 but made up to be old ‘n’ gray). 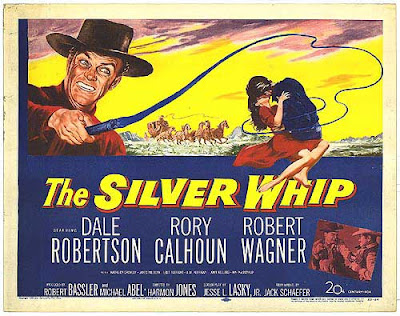 Good fun
The Silver Whip is an actionful and pacey oater that was typical of Fox’s early-50s B-Western output. There’s some classy black & white Lloyd Ahern cinematography of excellent locations (what looked like Lone Pine but I’m not sure) and the Lionel Newman music is stirring and fun (often based on folk tunes). Especially well done is the foot chase in the rocks when bad guy Slater (John Kellogg, in a sadly nondescript part which should have been built up more) is hunted down by second-billed Sheriff Rory Calhoun, who wants to bring him in for trial, and a more murderous top-billed Dale Robertson who prefers the first adjective (or could it be an adverb?) in the 'Dead or Alive' wanted posters. Full marks for this sequence to Ahern and director Harmon Jones.


Jones was a successful editor for Fox but less impressive as director. From the late 50s on he did mostly TV work but the few Western features he directed in the mid-50s were pretty good, actually. He made two with Dale Robertson in ’53 (this one and City of Bad Men) and another with Dale in ’56, for Universal, A Day of Fury. They weren’t bad at all. 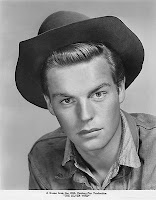 Wagner (left) was very young and skinny, and not really cut out for the genre. He only appeared in four Westerns, though they were big ones – he was even chosen as Jesse James in Fox’s 1957 remake.
As for Calhoun (below), he was a solid and dependable Western lead – though often, as here, he took second-lead parts. He always looked a bit ‘slick’ but he had a slight bad-boy image which helped. He’d been in San Quentin for auto theft (this was revealed in 1956) but that did his rep no harm at all with the public. In The Silver Whip, though, he is a very right-and-proper lawman, playing it by the book. It’s Dale, rather surprisingly, who leads the lynch mob. 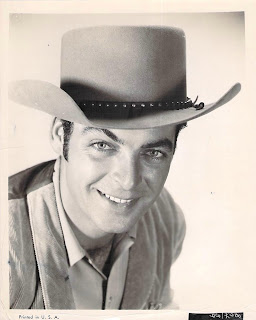 By the year of this movie Robertson (right) was well established in cowboy roles. He’d been Jesse James too (a cameo, really) in his first Western, Fighting Man of the Plains, in 1949, and long before Tales of Wells Fargo he had begun to lead in oaters like The Outcasts of Poker Flat (1952). As a boy I was such a huge fan of Wells Fargo that for me Dale can do no wrong, and so The Silver Whip is worth watching just for him.


Among the minor roles you can spot John Doucette as a pro-lynch townsman, Burt Mustin the Great as Uncle Ben, the elderly (he was always elderly - I think he was born that way) stage driver, and even a young Chuck Connors (though blink and you’ll miss him).


There are two dames, natch, a prim-and-proper one (Fox contract player Kathleen Crowley) and a racier saloon gal (sultry Lola Albright), as was traditional. The racy one is named Waco, and she is another example of a woman with a place name being slightly less than respectable (think Dallas in Stagecoach, Denver in Wagonmaster, Colorado in Colorado Territory, etc.) Both Waco and Uncle Ben are gunned down in the stage hold-up, so no wonder Dale was after them. 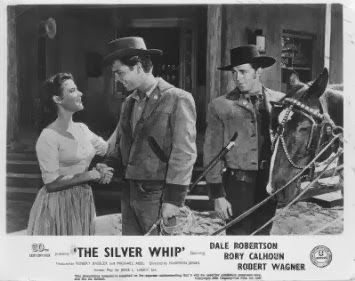 
The story was by Jack Schaefer, so had five-star credentials. The screenplay was by Jesse Lasky Jr., son of the mogul, who wrote a lot of pictures (including The Ten Commandments) and who had worked for Cecil B DeMille on North West Mounted Police and Union Pacific. The fact remains that The Silver Whip is a bit of a pot-boiler. Never mind, it’s good fun.