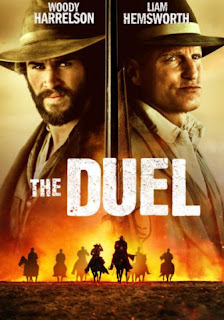 The Duel is a new Western from Lionsgate, and very good it is too that they are still making Westerns. It has certain qualities, though it lacks the blockbuster impact of the likes of The Revenant or The Hateful Eight from last year. It had a limited theatrical release and moved swiftly to VOD. It is now available on Netflix.


Set in post-Civil War Texas, it begins and ends with a barbarous single-combat knife fight, with the combatants bound together by their left arms, until one bloodily expires. The movie has a certain symmetry because the second duel is fought twenty years on by the sons of the participants in the first.


The protagonists (if you can have two) are Liam Hemsworth and Woody Harrelson. The agon part of protagonist certainly applies for it is a brutal contest, to say the least. I did not know Mr. Hemsworth. Apparently he is Australian and appeared in various episodes of the soap Neighbours but non-American actors these days are so good at convincing us with their accents; I only discovered his less then Texan ancestry when I looked him up. He’s good as the Texas Ranger sent to the Rio Grande to investigate and put a stop to the disappearance and death of Mexicans from the Texan side. 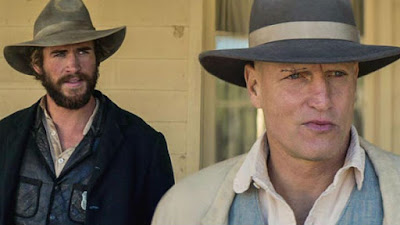 Ranger and preacher. That's the sheriff's badge the Ranger is wearing, not a Ranger badge.
His opponent, in every way, is Woody Harrelson as Abraham, a (very) charismatic preacher dressed in white. We already know Mr. Harrelson, of course, Woody from Cheers, Big Boy Matson in The Hi-Lo Country, a Natural Born Killer, also a (failed) killer in No Country for Old Men. In The Duel he is bald and psychopathic, a religious racist with slightly less charm than a trod-on rattlesnake. He is said by Governor Ross (William Sadler), who sends the Ranger on the mission, to have taken a thousand scalps for the bounty. Harrelson may have seen Brando’s Kurtz in Apocalypse Now. And/or read Blood Meridian.


These two characters carry the story along its gruesome and grisly way.


It begins in rain with baroque sacred music on the soundtrack (Albinoni, I think) and the gloom and menace deepen thereafter. Abraham has a nasty and shiftless son - named Isaac, obviously - and the Ranger soon tangles with him in what will be the precursor to one of the battles of the film’s title.


The Ranger has a badge, which they didn’t, then, but never mind. It establishes him as a Ranger for us. Of course he doesn’t wear it when he gets to Mount Hermon, Abraham’s personal fief, because he is undercover. But the preacher has sniffed him out as a foe, even if he does make him sheriff. One reason is that the Ranger has foolishly allowed his wife Marisol (Alice Braga) to accompany him and she is Mexican. Preacher Abraham regards Mexicans as lower than the dirt he treads, though he seems also to lust after Marisol.

This scene reminded me of the death of Ellsworth in Deadwood
She falls immediately - dramatically speaking, too immediately - under the spell (perhaps literally so) of Abraham, falls sick and becomes his disciple, and lost to the Ranger. This part doesn’t convince.


The picture is visually fine, as films tend to be these days, and the detail seems authentic. It is slow-moving, though, which can work if the atmosphere is intense and the tension builds, as in, say, The Assassination of Jesse James by the Coward Robert Ford, but this movie doesn’t have the heft of that fine film. You are carried along at the end but you need patience, especially during the first reel (if movies have reels these days).


Like The Assassination…, The Duel does not preoccupy itself with the trappings of the Western. Though there are guns, certainly, and there is a final showdown, there are no spurs and stagecoaches and all the rest. It is more a tense drama which happens to be set in nineteenth century Texas. It has something useful to say about cults and their leaders, something not very complimentary but true; in fact it is slightly down on organized religion as a whole, as far as an American movie dares to be. It isn’t really a revenge story, despite the fact that Abraham killed the Ranger’s daddy in that opening duel. The Ranger is too stolidly duty-bound for that. But he’s a Western hero in the sense that he does what a man’s gotta do and then rides off into the Texas brush, if not the sunset.