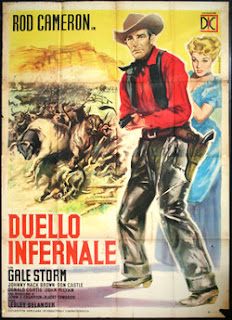 With a title like that there are no prizes for guessing what the climax of this B-Western will be, and the stampede is combined with dynamitin' a dam, mucho shootin’ and a fatal fistfight in a moonlit lake. Good old Lesley Selander directed and while he may not have been an arty director of fine films, he sure knew how to handle Western action scenes. Stampede is in fact an actionful B-Western with quite a lot to recommend it.


It’s a classic cattleman vs. homesteaders plot but just before you switch off, saying Been there, done that, I would just add that there are complex plot twists, some good dialogue and even developments of character, as cattle baron Rod Cameron starts off an out-and-out ruthless rancher of the old school but gradually becomes more sympathetic. He’s Mike McCall (no relation to Jack, I’m sure). 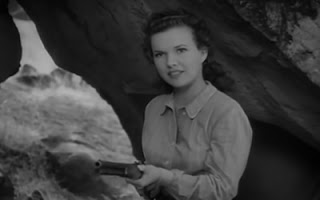 Cameron was rather in the second rank of Western leads but he was always solid and reliable. His imposing build and gritty character made him suitable for the genre. And he is well supported in this one, with a rather charming Don Castle as his happy-go-lucky young brother Tim and the dramatically named if diminutive Gale Storm (right) as the tomboy homesteader Connie who starts hostile and gradually comes to love Rod. Storm was a Monogram contract player who had starred in Allied Artists (a sort of grown-up Monogram)’s 1947 hit It Happened on Fifth Avenue. She’d been in a few Roy Rogers oaters. Castle specialized in fresh-faced kid roles and had featured in Hardy boys movies. In 1942 he’d been in Tombstone, The Town Too Tough To Die, but he was only ever in five Westerns and never led in one. 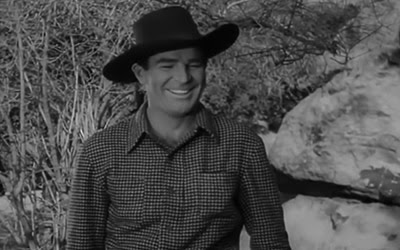 In addition we have Johnny Mack Brown as a likeable sheriff. Of course Johnny had been appearing in movies since the silent days and had then been Billy the Kid in the King Vidor-directed talkie of 1930. But he had descended to studios like Mascot (and worse) and led in dozens and dozens of very B Westerns, occasionally taking smaller roles in bigger ones. He’d already made over a hundred oaters before this one.


And I also thought a couple of the other characters well done, notably John Miljan as the conflicted banker who gradually loses his dignity, Jonathan Hale as the lawyer and John Eldredge as the land agent for the settlers. The writing of these parts is subtle and the acting classy enough to carry it off. 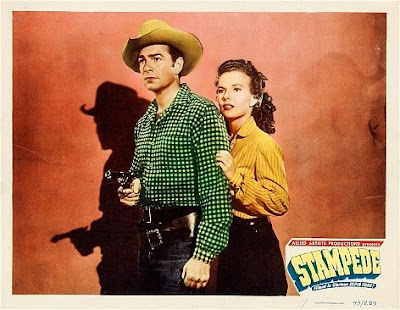 The main villain, though, Stanton, who owns the town and will go to any lengths to beat cattleman Rod, including several murders and provoking the aforementioned stampede/dam-dynamiting, is a bit over-the-top and impossibly evil. He is played by Donald Curtis who’d had small parts in B-Westerns throughout the 1940s and later became a religious self-help writer. I don’t know how he was as a scribbler but his Westerns weren’t too hot.


Anyway, there is some good writing and acting. The screenplay was an early effort of Blake Edwards, later Mr. Julie Andrews and the Breakfast at Tiffany’s and Pink Panther fellow. He had first done another Rod Cameron oater, Panhandle, the year before and would later go on to write and/or direct several Westerns including Wild Rovers and Sunset. His co-writer was John C Champion, who also started on Panhandle. 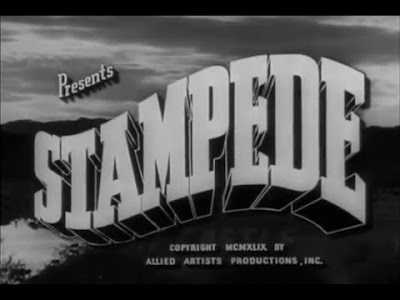 The black & white photography is by Harry Neumann and occasionally rather good. The stampede of cattle over a cliff is skillfully done in miniature that is almost convincing (thank goodness it wasn’t real). There are a lot of night scenes and these contribute to the noir atmosphere (of course noir Westerns were all the rage in the late 40s). The fistfight which becomes a gunfight and then again a fistfight is especially well done, and full marks to director and cinematographer. Oh, and actors, I guess.


A Rod Cameron B-Western, yes, with all that implies, but actually this is rather a superior one.