Rod Cameron made three Westerns with fellow Canadian Yvonne De Carlo. River Lady was the best of them (Salome Where She Danced and Frontier Gal were frankly dire) but it’s only relative. While Cameron was a good, solid Western lead, and River Lady also benefits from Dan Duryea as the bad guy, De Carlo was unsuited to the genre. That didn’t seem to stop her, though. The same year as River Lady she starred with Duryea (but sans Rod) in another, Black Bart, and the following year she was a ludicrous Calamity Jane, with an equally implausible Howard Duff as outlaw Sam Bass in Calamity Jane and Sam Bass. And so it went on (and on), with TV Westerns replacing features as the 60s wore on. The nearest she came to being any good in an oater was opposite Van Heflin in Tomahawk, also directed by George Sherman. 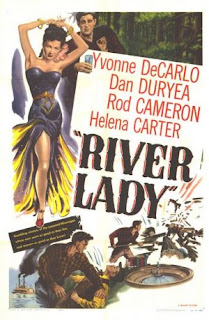 Despite being a Universal picture, in Technicolor, with an experienced director (Sherman) and writer (DD Beauchamp) it was below par for the studio. There are some nice location shots of logging (it’s a lumberjack tale) but very few - they must have done a couple of days location shooting at most - and the majority of the picture is done in the studio, with very obvious back projection for ‘exterior’ shots. Cinematographer Irving Glassberg, capable of classy Western work (such as Bend of the River), had no opportunity to shine at all on this picture. The whole thing is a very B Western.


The eponymous fluvial dame is not Sequin (De Carlo) but the Mississippi riverboat she owns. As her unsuccessful suitor Beauvais (Duryea) tells Sequin, she herself will never be a lady (which is perhaps why he was unsuccessful as a suitor). Sequin is rich but highly ambitious, and she loves Irish logger Corrigan (Cameron) but wants him to be a big man, not just a Mick timber jack. Even the riverboat is a sham; we only see a couple of shots of it on the Mississip and the rest is done on a soundstage and could be any old saloon, and its owner any saloon gal. She sings a (quite catchy) song but only one, which is a relief. 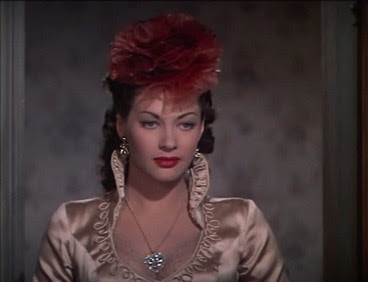 De Carlo as saloon madam
The excellent John McIntire, looking quite young, is an independent lumber merchant that Duryea and his syndicate is trying to buy out. He has a pretty young daughter, Stephanie (Helena Carter, who had a short contract with Universal and was best known for Invaders from Mars). Stephanie has designs on Rod too, and finally gets him to the altar, though he doesn’t love her. It’s all a bit of a low-on-passion potboiler, to be honest. 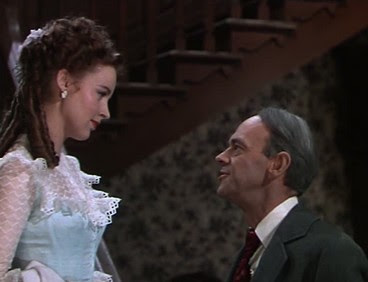 Dad John McIntire warns daughter Helena Carter about the ruffian Rod
Jack Lambert is a thuggish logger who hates Rod, so that's good, but there are few familiar-face character actors otherwise. Robert J Wilke appears in the cast list but I didn’t spot him; it must have been a micropart. What a waste.


There’s a climactic fight on the river as Rod tries to free up a logjam with dynamite and Dan tries to stop him. You may guess the outcome. 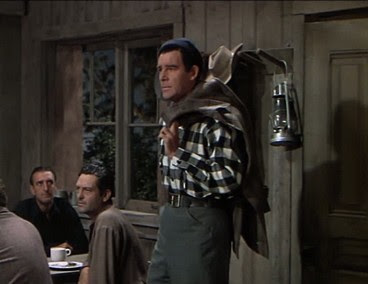 Cameron: solid
Cameron is reliable and solid, as ever. Duryea is unusually subdued for him and does not ham it up. He has a splendidly caddish mustache though. McIntire has little chance to shine. The female leads are weak. It’s a bit low on action, with too much talking. Though 1948 was a fabulous year for Westerns, they couldn’t all be great. 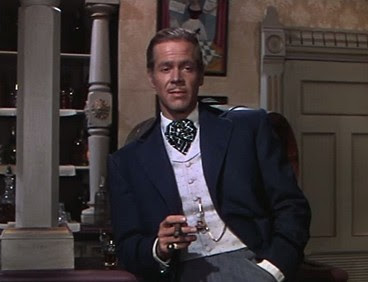 Duryea: unusually restrained
If you want to know if logger Rod goes off finally with Yvonne or Helena, you’ll have to watch it yourself. But I don’t think you’ll find the tension unbearable.