(For my own summary of Wyatt Earp in fact and fiction, click the links).

Wyatt Earp was one of the excellent series of American Experience documentaries aired on PBS. 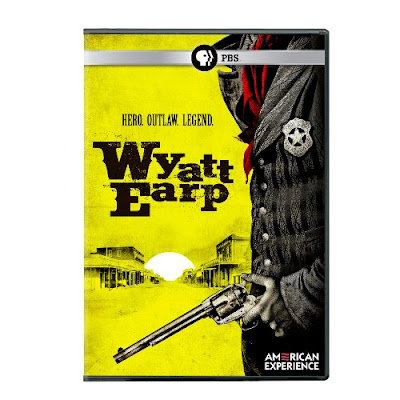 Slightly sensational DVD cover for quite a sober documentary
Written and directed by Bob Rapley (who has done films on the assassination of President Garfield, the Chinese Americans and the abolitionists) it gives us a 54-minute potted summary of the life of the famous Western lawman.


Like all these shows, Wyatt Earp is moderate, balanced, carefully researched and informative. That’s useful when reviewing a figure who has been so sensationalized by Hollywood and the dime novelist, and who even in his own time excited great partisanship and enmity.


One of the strong points of the film is the choice of talking heads. They include most notably Casey Tefertiller, the author of the best life of Wyatt Earp, but also historians Andrew Isenberg (who has also written a biography of Earp), Paul A Hutton, Gary L Roberts (who has written a life of Doc Holliday), Anne M Butler, Jim Dunham and Katherine Benton-Cohen, and writers Bob Boze Bell and William B Shillingberg. It’s a good line-up. 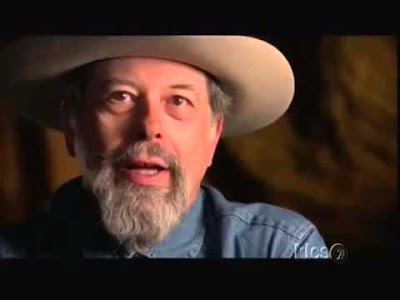 Casey Tefertiller
It opens with an elderly and urban Mr. Earp, in Los Angeles in the 1920s. We are told that Wyatt loved the early Western movies and went to see them all. He urged the great William S Hart to make a film of his life but that never happened. He and his partner of 46 years, Josephine Marcus, had drifted round the West for decades after Tombstone (when Wyatt was only in his mid-thirties) but never found the pot of gold at the end of the rainbow. 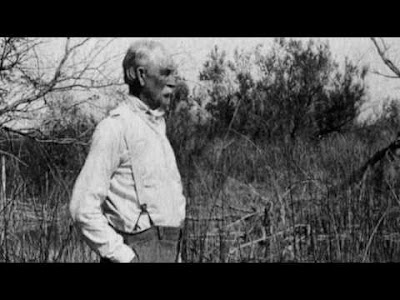 An elderly Wyatt in LA in the 1920s
Switching to Earp’s early life, we see just how marginal his existence was. His father, Nicholas, is said to have been shiftless, a bully and a drinker, who skipped out on debts, and his family were always on the move. Though Wyatt himself did apparently make an effort to ‘settle down’, marrying and taking a job as town constable, he ‘went bad’ when his wife and unborn child died of typhoid, and we see him escaping from jail for horse stealing in Indian Territory, then as a pimp or enforcer in Illinois (arrested three times in Peoria) and living with a series of working prostitutes. When his older brother James opened a brothel in Kansas, Wyatt drifted there.


But, the film suggests, Wichita was the making of him because there he got a taste and a rep for part-time and temporary law-enforcing. His name started to appear in the papers (‘Wiatt Erp’ in The Wichita Eagle, ‘Wyatt Erp’ in the Police Gazette). Then to Dodge where, we are told, he got into no gunfights but used his burly 6-foot frame and the barrel of his .45 to discipline the cowboys.


Andrew Isenberg takes at face value the inscription on the flyleaf of a bible presented to Earp at this time, which commends him for following in the footsteps of the meek and holy Jesus, though I have more than a sneaking suspicion it was ironic. There was not much meek about Wyatt and far from being holy, it was very possible that he was not a believer at all. 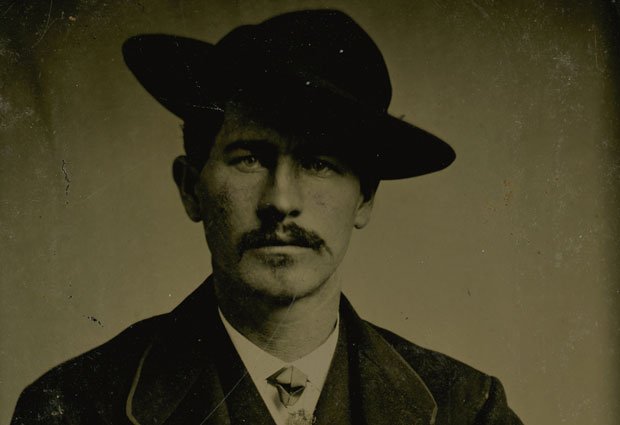 The photo of Wyatt most used in the film. He reminds me of an actor but I can't place which. Robert Shaw?
A lot of the documentary is devoted to the Earps’ time in Tombstone. Fair enough. Though a tiny proportion of Wyatt’s career, it was a time that would mark him for life and go down in American history. We are walked through the ins and outs of Tombstone politics and the various shootings. The Earps’ trial is not mentioned, but they can’t do it all in under an hour. There were some fascinating photographs and interesting commentary on Tombstone at the time. One shot especially caught my attention, one of elegant ladies in long skirts playing tennis on a court among industrial silver-mines. It captured well the double-sided coin that the town was in the early 1880s, as it boomed in size and sought respectability.


There's no Buntline Special (probably rightly). Another no-show is John Ringo, which will disappoint some, but we get quite a lot on Ike Clanton. Interesting to see how here too the Earps, although in the Republican law-and-order camp, were still shunned as being not quite respectable. The Earp women were not invited, and Virgil was turned down as a mason. Some of this may have had to do with Wyatt’s friendship with the very disreputable Doc Holliday (and Virgil’s acceptance of his participation in the OK Corral fight was a political error). The other Earps disliked and distrusted Doc.


In 1881 there was a real chance that Wyatt Earp could have beaten the charming but rotten Johnny Behan in the elections for county sheriff, and this would have changed everything. We are told that in an age when cowboys made a dollar a day, a county sheriff could make $30,000 a year collecting taxes and fines, really an astonishing sum. But it was never to be and it is possible that the Earps were not as skilled in the dirty world of territorial politics as they were with firearms. Wyatt’s arrangement with Ike Clanton to get Ike to betray the Benson stage robbers in return for the Wells, Fargo reward money (a coup which Wyatt believed would have got him elected) all went wrong when the culprits were killed in separate incidents, and Ike drunkenly blabbed about the secret deal. It led to the famous gunfight, the subsequent revenge of the cowboys, in which Virgil was dreadfully wounded and Morgan killed, Wyatt’s bloody vendetta and then his departure for Colorado.  Those events haunted Wyatt for the rest of his life.


The film has little time to discuss those later years. Josephine is hardly even mentioned. But as I say, you can’t expect them to do it all.


Still, it’s a good documentary, which I think you will find informative and interesting if you get the chance to see it.